The advisor to the United Nations envoy on Syria today reported further progress in the humanitarian relief efforts in the conflict-battered country, with access to more areas, allowing the delivery of medical kits as well as vaccines for children.

Briefing the media in Geneva, Jan Egeland, the Special Advisor to UN Special Envoy for Syria Staffan de Mistura, said humanitarian convoys have already reached or got verbal Government consent to reach most of the 18 besieged areas, except Darayya and Douma.

Last night, an inter-agency convoy of the UN, the International Committee of the Red Cross (ICRC), and the Syrian Arab Red Crescent arrived in Al Houla in Homs for the first time since last October. A convoy also reached the Orem area in western Aleppo over the weekend.

“We are now up to 384,000 people reached since the beginning of the year via inter-agency convoys in hard-to-reach areas, besieged areas, and other priority cross-line areas,” he said.

With verbal permissions having just been issued for eight or nine of the 11 areas the UN requested for April, that number is expected to double in the coming weeks, he added.

He also reported that medical kits went through to Al Houla after extensive negotiations. But surgical material was again taken off the convoys. “It is a war zone; civilians and others need surgical help,” he insisted.

Turning to the vaccination campaign, he said vaccinating children is symbolically important in a conflict, and especially in a peace effort. “There is nothing more symbolic than children being able to resume school and being vaccinated against diseases,” he said, noting that one million children in hard-to-reach and besieged areas will be vaccinated by the end of April through the facilitation of the UN Children's Fund (UNICEF) and the World Health Organization (WHO).

Air drops are expected to start in “days and weeks” over Deir ez-Zor, where 200,000 civilians, mostly women and children, are waiting for relief aid, he said.

Meanwhile, the UN Relief and Works Agency for Palestine Refugees in the Near East (UNRWA) reported today that it has continued humanitarian operations in Yalda for the sixth consecutive week.

A medical team comprised of two medical officers, two nurses and one assistant pharmacist was deployed for the fourth time since February, when the UN agency was allowed to resume operations to support vulnerable civilians from Yarmouk, Yalda, Babila and Beit Saham. The medical team reportedly treated 253 patients today, including 114 women and 78 children, for a range of non-communicable and other common diseases. 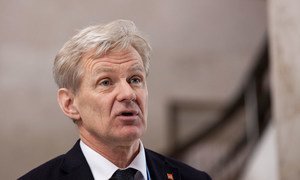