On 1 March, a pre-trial procedure, known as a confirmation of charges hearing, was opened in The Hague by the International Criminal Court (ICC) for a case related to alleged cultural destruction in Timbuktu, Mali.

While stressing that she does not want to prejudge the ongoing individual case before the ICC, Ms. Bennoune said that the destruction of cultural heritage by States and non-State actors must be urgently addressed by the international community.

“When mausoleums – as well as ancient Islamic manuscripts - were being destroyed by armed groups during their 2012 occupation of Northern Mali, various forms of cultural practice were also under attack, including music and religious practices,” she said.

The UN expert welcomed the decision of the ICC Prosecutor's Office, for the first time, to charge the destruction of cultural and religious sites, as well as historical monuments, as a stand-alone war crime.

In a report to be presented to the UN Human Rights Council on Thursday 10 March, the expert will address further the links between destruction of cultural heritage and violations of cultural rights. She will also make key recommendations, including for international cooperation and technical assistance.

She said that cultural heritage professionals on the frontlines of the struggle against destruction must be provided with the conditions necessary to complete their work, and asylum when necessary.

“We must not wait to rally to the cause of at-risk cultural heritage defenders until we are mourning their deaths,” the human rights expert said, while honouring the memory of Syrian archaeologist Khaled al-Asaad, retired chief of antiquities for Palmyra, killed in 2015.

Moreover, tribute should be paid to ordinary people who step forward to defend cultural heritage, like those in Northern Mali who reportedly hid manuscripts beneath the floorboards of their homes to protect them or those in Libya who tried to peacefully protest destruction of Sufi sites, Ms. Bennoune said.

The Special Rapporteurs are part of what is known as the Special Procedures of the Human Rights Council. Independent human rights experts, appointed by the Council, address either specific country situations or thematic issues in all parts of the world. They are not UN staff and are independent from any government or organization. They serve in their individual capacity and do not receive a salary for their work. 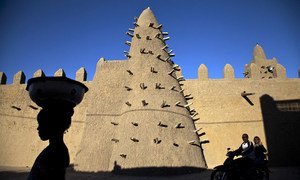 A consecration ceremony of the Timbuktu mausoleums, last held in the 11th century, was celebrated today at the initiative of the local community, the final phase of the United Nations-backed cultural rebirth of the age-old Sahara city after the destruction wrought by radical Islamists in 2012.