UNICEF/UN011419/Sokhin
Filise, 10 (left) and Eremodo 12 (right), are in the classroom they share at Somolevu Catholic School, Vuaki Island, one of many schools in Fiji damaged during Cyclone Winston.
1 March 2016

More than a week after a devastating tropical storm ripped through Fiji, some 40 per cent of the islands' children are “at risk,” with many living without safe drinking water, power or a roof over their heads, the United Nations children's agency says.

An estimated 347,000 people, 40 per cent of the country's total population, including 120,000 children, are directly impacted by Tropical Cyclone Winston, the second-strongest storm to ever make landfall, second only to Super Typhoon Haiyan in the Philippines, according to the UN Children's Fund (UNICEF).

“This is a truly nationwide disaster for Fiji,” said UNICEF Pacific Representative Karen Allen. “It is now clear that a staggering 40 per cent of Fiji's children are very much at risk. The immediate and long-term implications for their health, safety, education and development are colossal.”

Far too many children have lost literally everything – their possessions, their home, the family's crops and possibly income, their school and their community health clinic, she said, stressing that “many of these children don't have safe drinking water, power or a roof over their heads.”

Fiji's Ministry of Education has reported that at least 240 schools have also been damaged or destroyed. Many are also being used as temporary evacuation centres, sheltering families who have lost their homes.

On Monday, 1,177 schools were able to reopen but hundreds will face further delays due to damage – in the last week alone UNICEF has already supplied 60 temporary classrooms to most-affected schools – and many more are on the way.

In addition to supporting affected children to return to school, UNICEF is working closely with the Government and development partners to ensure that affected children and their families have access to clean, safe drinking water, sanitation, health and protection.

A 13-year-old Adi from Yaqeta village in the outer Yasawa Islands saw her house collapse. “I grabbed my brother and we run. I was so scared. We run from house to house three times. Now I am heartbroken to see the house where I was born and raised in, in pieces.”

“Sadly, Adi's story is a common one,” says Ms. Allen. “What makes matters worse is that, in times of emergency, a school is often a child's refuge – but so many schools have also been knocked out of commission.” 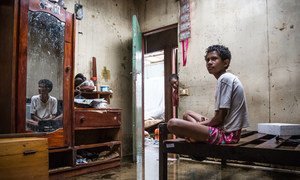 As the full picture of the worst cyclone ever to hit Fiji becomes more apparent, the United Nations Children's Fund (UNICEF) estimates that up to 120,000 children across the county may be badly affected.