UNICEF/UNI116888/Lemma
A woman draws water from a collection tank in the ground, in Melbana Village, Mio District, in Ethiopia’s drought-affected Borena Zone. The collection tank has just been filled by a tanker truck delivering emergency water supplies. 2011
17 February 2016

Across eastern and southern Africa, millions of children are at risk from malnutrition, hunger, water shortages and disease, the United Nations Children's Fund (UNICEF) warned today, citing two years of erratic rain and drought combined with one of the most powerful El Niño events in the past 50 years.

The situation is being aggravated by rising food prices, which are forcing families to implement drastic coping mechanisms such as skipping meals and selling off assets, resulting in almost 1 million children being in need of treatment for severe acute malnutrition in the region, said Leila Gharagozloo-Pakkala, UNICEF Regional Director for Eastern and Southern Africa, in a press release today.

“The El Niño weather phenomenon will wane, but the cost to children – many who were already living hand-to-mouth – will be felt for years to come,” she emphasized.

“Governments are responding with available resources, but this is an unprecedented situation. Children's survival is dependent on action taken today,” she added.

According to UNICEF, Lesotho, Zimbabwe and most provinces in South Africa have declared a state of disaster in the face of growing resource shortages. In Ethiopia, the number of people in need of food assistance is expected to increase from more than 10 million to 18 million by the end of the year.

Releasing its latest briefing on the impact of El Niño on children in the region, UNICEF noted that, in Ethiopia, two seasons of failed rains mean that nearly 6 million children currently require food assistance, with school absenteeism increasing as children are forced to walk greater distances in search of water.

In Somalia, more than two thirds of those in urgent need of assistance are displaced populations, while in Kenya, El Niño-related heavy rains and floods are aggravating cholera outbreaks.

Meanwhile, in Lesotho, one quarter of the population is affected. This aggravates grave circumstances for a country in which 34 per cent of children are orphans, 57 per cent of people live below the poverty line, and almost one in four adults live with HIV/AIDS.

In Zimbabwe, an estimated 2.8 million people are facing food and nutrition insecurity. The drought situation has resulted in reduced water yields from the few functioning boreholes exacerbating the risk to water-borne diseases, especially diarrhoea and cholera.

The agency also noted that Malawi is facing the worst food crisis in nine years, with 2.8 million people (more than 15 per cent of the population) at risk of hunger. Cases of severe acute malnutrition have increased by 100 per cent from December 2015 to January 2016.

In Angola, an estimated 1.4 million people are affected by extreme weather conditions and 800,000 people are facing food insecurity, mainly in the semi-arid southern provinces.

The UN Office for Humanitarian Affairs (OCHA) has estimated that it will take affected communities approximately two years to recover from El Niño-exacerbated drought, if agricultural conditions improve in the latter half of this year.

UNICEF also stressed that its humanitarian appeals are less than 15 per cent funded across El Niño-impacted countries in southern Africa. 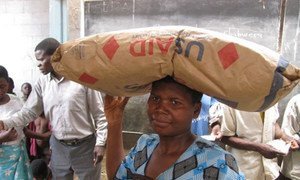 Over the coming year, humanitarian partners should prepare for food insecurity levels and food insecure population numbers in southern Africa to be at their highest levels since the 2002-2003 food crisis, the United Nations agriculture agency warned today, citing an 'intense' drought as the main cause.