Bethany Matta/IRIN
The Taliban has taken territory in Khanabad district in the Afghanistan province of Kunduz on the other side of a bridge pictured here in August 2015.
14 February 2016

The United Nations reported today that Afghan hostilities in 2015 left more than 3,500 civilians dead, including an unprecedented number of children – one in four casualties over the past year was a child – and nearly 7,500 others wounded, making this the highest number of civilian casualties recorded.

“This report records yet another rise in the number of civilians hurt or killed. The harm done to civilians is totally unacceptable,” said Nicholas Haysom, the Secretary-General's Special Representative for Afghanistan and head of the UN Assistance Mission in the country (UNAMA), in a press release.

The annual report, produced by the UNAMA in coordination with the Office of the UN High Commissioner for Human Rights Office (OHCHR), shows that increased ground fighting in and around populated areas, along with suicide and other attacks in major cities, were the main causes of conflict-related civilian deaths and injuries in 2015.

“We call on those inflicting this pain on the people of Afghanistan to take concrete action to protect civilians and put a stop to the killing and maiming of civilians in 2016,” stressed Mr. Haysom.

At a press conference today in Kabul, Mr. Haysom told reporters that while the figures in themselves are “awful,” the statistics and percentages contained in the report do not really reflect the real horror of the phenomenon.

“The real cost we are talking about in these figures is measured in the maimed bodies of children, the communities who have to live with loss, the grief of colleagues and relatives, the families who have to make do without a breadwinner, the parents who grieve for lost children, the children who grieve for lost parents […] these are the real consequences of the acts described in this report,” he emphasized.

“The people of Afghanistan continue to suffer brutal and unprincipled attacks that are forbidden under international law,” UN High Commissioner for Human Rights, Zeid Ra'ad Al Hussein said in the press release, adding that this is happening with almost complete impunity.

“The perpetrators of the violations, documented by UNAMA and my staff, must be held to account,” Mr. Zeid underscored, adding that the international community should emphasize far more vigorously that the rights of civilians should be protected.

Notwithstanding the overall decrease, the report documents anti-Government elements increasing use of some tactics that deliberately or indiscriminately cause civilian harm, including targeted killings of civilians, complex and suicide attacks, as well as indiscriminate and illegal pressure-plate IEDs. 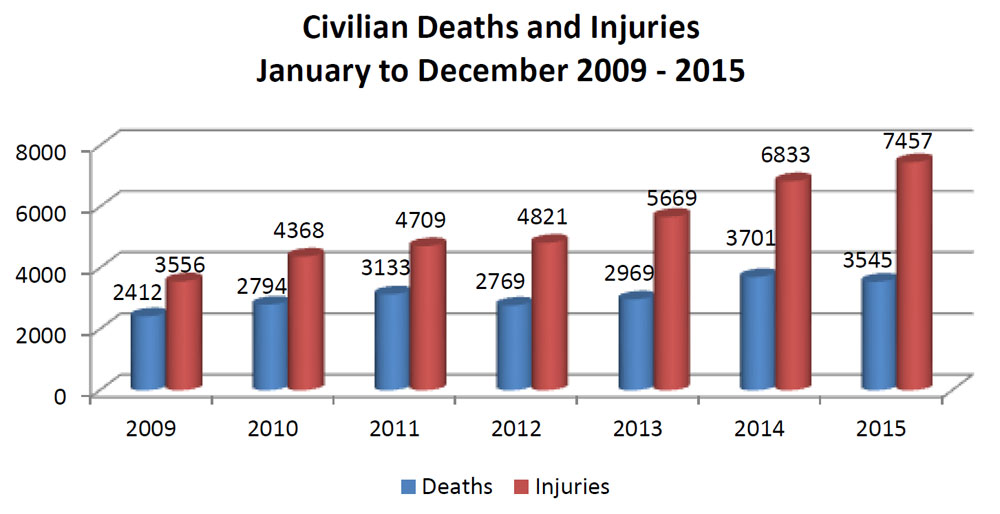 Civilian Deaths and Injuries by Parties to the Conflict: January to December 2015 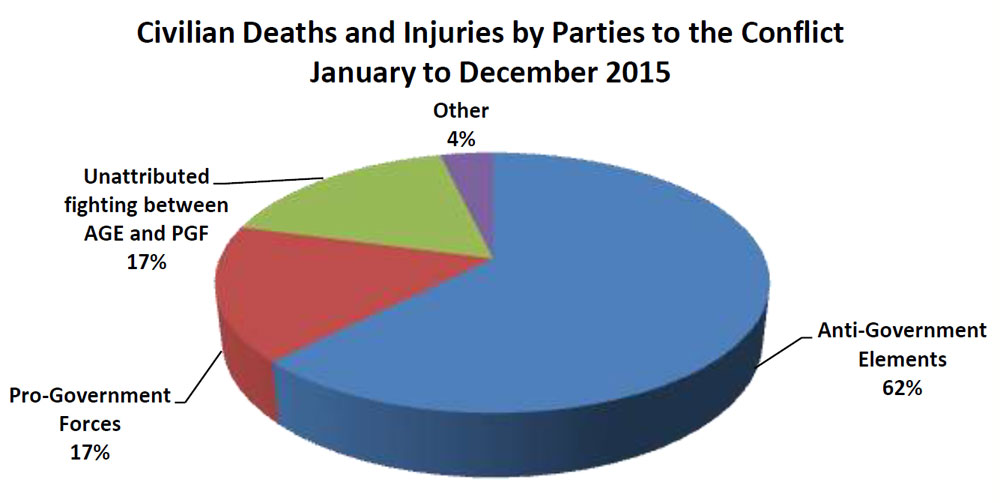 Civilian deaths and injuries by tactic and incident type: January to December 2015 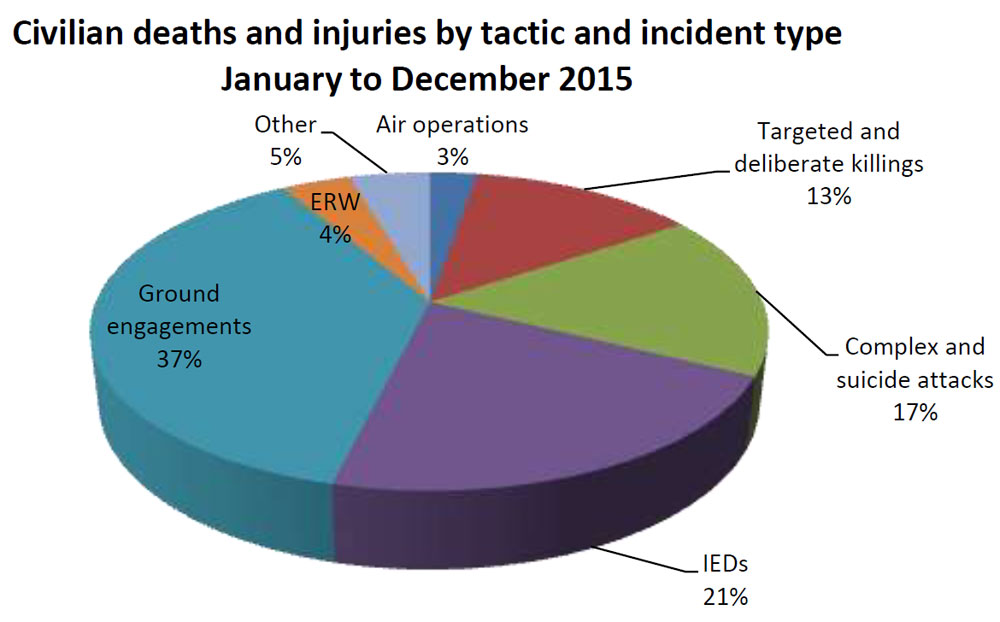 “In 2015, the conflict caused extreme harm to the civilian population, with particularly appalling consequences for children. Unprecedented numbers of children were needlessly killed and injured last year – one in four casualties in 2015 was a child,” said Danielle Bell, UNAMA Director of Human Rights. “Other children suffered the loss of parents, and increasingly their mothers, sisters, and female role models – one in 10 casualties was a woman.”

The United Nations Assistance Mission in Afghanistan (UNAMA) today condemned a spate of bombings in civilian areas of Kabul by the Taliban in the first few days of the New Year.