In the town of Beit Hanoun in northern Gaza, a Palestinian woman prepares food for her family inside her bombed out house, damaged in the 2014 hostilities. Her house suffers from waters leaks and is engulfed in freezing winds as a result of the latest winter storm (January 2016). UNICEF/UN08528/El Baba
12 February 2016

Condemning all acts of terror and urging restraint amid continuing violence against civilians, the United Nations and its Middle East Quartet partners today called on all parties to actively take steps to de-escalate current tensions between Israelis and Palestinians.

“The Quartet expressed its serious concern that current trends on the ground – including continued acts of violence against civilians, ongoing settlement activity, and the high rate of demolitions of Palestinian structures – are dangerously imperilling the viability of a two-state solution,” according to a statement issued in Munich, Germany.

According to today's statement, “the Quartet reiterated that the status quo is not sustainable and that significant steps, consistent with the transition contemplated by prior agreements, are urgently needed to stabilize the situation and to reverse negative trends on the ground.” Continued absence of such steps “was leading to further deterioration, to the detriment of both Israelis and Palestinians,” the statement said.

It added that: “The Quartet will remain engaged with the parties in order to explore concrete actions that both sides can take to demonstrate their genuine commitment to pursuing a negotiated two-state solution.”

Meanwhile, in Geneva, a spokesperson for the Office of the UN High Commissioner for Human Rights (OHCHR), Cécile Pouilly, expressed concerns over recent developments in the Occupied Palestinian Territories and Israel. OHCHR had received “worrying news” that the Al-Qassam Brigades had executed one of their members, Mahmoud Eshtaiwi, in Gaza, on 7 February, which “may amount to an extra-judicial killing and “an arbitrary deprivation of life,” she said in a press briefing note.

OHCHR called on the Palestinian authorities, including authorities in Gaza, to quickly launch an independent and credible investigation.

The UN human rights office also remained deeply concerned about the situation of Mohammed al-Qiq, who had been on hunger strike for 80 days to protest against his administrative detention in Israel, the Spokesperson continued. His condition was reported to be critical and OHCHR once again called for “all persons in administrative detention in Israel to be either charged with a criminal offense or released immediately,” she added. 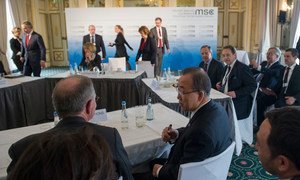 After two days of meetings in Jerusalem and Ramallah with Israeli and Palestinian officials, the United Nations and its partners in the diplomatic Quartet on the Middle East peace process strongly condemned today all acts of terror and stressed the importance of opposing unequivocally incitement and violence and de-escalate the situation.