OCHA
Girls fetching water in Mawyah district, Taiz. This role often falls on the shoulders of girls and young women, often at the expense of their education.
10 February 2016

Following months of blocked access to the Yemeni city of Taiz, and in response to mounting emergency health needs, the World Health Organization (WHO) said today it has successfully delivered more than 20 tonnes of life-saving medicines and medical supplies to meet the most urgent needs of those with limited access to humanitarian aid.

The health supplies, which had been blocked from entering the city for eight weeks, were delivered to Al-Thawra, Al-Jumhoori, Al-Rawdha and Al-Ta'aon hospitals as of 31 January, WHO said in a press release.

“Hospital staff in Taiz City are desperate for medicines and medical supplies so that they can continue to offer the most basic medical care. The delivery of these WHO supplies is a huge step that we are hoping will pave the way for the provision of more medical support to the city,” said Dr. Ahmed Shadoul, WHO representative in Yemen.

The supplies include trauma kits, interagency emergency health kits, diarrhoeal disease kits and 170 oxygen cylinders, enough for about 35,000 beneficiaries. In addition, dialysis solutions were facilitated to Al-Thawra Hospital for 30,000 dialysis sessions for one year.

WHO said that three districts in Taiz – Al Mudhaffar, Al Qahirah and Salah – still remain inaccessible and people are in urgent need of food, safe water and life-saving health services. Many hospitals have been forced to close their intensive care units due to a lack of fuel, medicines and health staff, and patients with chronic medical issues such as diabetes, kidney disease and cancer are struggling to access essential medicines and dialysis centres.

Shortages in food have led to a significant increase in prices, with many people now unable to afford basic food items, resulting in increased risk of malnutrition, especially in children, WHO said. The main wells providing safe drinking-water have shut down due to interruptions in power supplies and a lack of fuel for generators.

WHO added that earlier this week, an aid plane landed in Sana'a airport with an additional 40 tonnes of medicines and medical supplies, which will be distributed where they are most needed across the country.

“It is vital that WHO and partners are given unrestricted access to all people in need, so that they can be urgently provided with life-saving health care,” Dr. Shadoul stressed.

Since April 2015, ongoing violence and insecurity in Yemen continues to limit the delivery of aid to Taiz. In recent weeks, the UN has made repeated calls to all sides to allow humanitarian access to Taiz and all other besieged areas throughout the country where civilians have been deprived of the basic necessities of life. 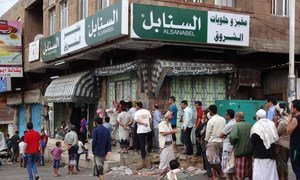 Some 14.4 million Yemenis, more than half the population, are food insecure, an increase of 12 per cent in just the last eight months, as ongoing conflict and import restrictions reduce availability and send prices soaring, the United Nations agricultural agency warned today.