Low on funds, UN and partners race ahead of rains to tackle needs in South Sudan

With humanitarian needs rising in South Sudan, the top United Nations relief official in the country has called for urgent funding to allow aid organizations to rapidly increase humanitarian action during the current dry season.

“Aid workers are in a race against time to respond in areas previously cut off by fighting and rains, and to pre-position vital supplies ahead of the next rainy season,” said Eugene Owusu, the UN Humanitarian Coordinator for South Sudan, in a press release.

“If we are unable to act now, the situation will be much worse, and the response will be much more costly in the months ahead,” he added.

Mr. Owusu said he has allocated $20.3 million to top priority projects from the South Sudan Common Humanitarian Fund, which is a multi-donor pooled fund focused on the disbursement of donor resources to humanitarian partners. However, partners urgently require $220 million for critical actions to be taken before the end of the dry season in May, he stressed.

Appealing to donors to “give generously, and to give now,” to replenish the fund, Mr. Owusu said the additional funding was necessary to combat widespread food insecurity, malnutrition, displacement and disease in the country.

This year, about two per cent of the $1.3 billion required to provide life-saving assistance and protection has been received.

“I am deeply concerned that we are facing increasing needs with diminishing resources,” he said. “The world must not let South Sudan become a forgotten crisis. Humanitarian partners are standing ready to respond, but they cannot do so without funding.”

Earlier this week, UN agencies warned that South Sudan faces unprecedented levels of food insecurity, with 2.8 million people – nearly 25 per cent of the population – in urgent need of aid, at least 40,000 of them on the brink of catastrophe, at a time when the war-torn country is traditionally most food secure. 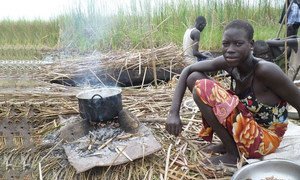 South Sudan faces unprecedented levels of food insecurity, with 2.8 million people, nearly 25 per cent of the population, in urgent need of aid, at least 40,000 of them on the brink of catastrophe, at a time when the war-torn country is traditionally most food secure, United Nations agencies warned today.