FAO South Sudan
An internally displaced woman seeking refuge from the ongoing violence in the swamps of Unity state, cooks her last supply of sorghum.
8 February 2016

South Sudan faces unprecedented levels of food insecurity, with 2.8 million people, nearly 25 per cent of the population, in urgent need of aid, at least 40,000 of them on the brink of catastrophe, at a time when the war-torn country is traditionally most food secure, United Nations agencies warned today.

“It is not only areas directly affected by conflict that are food insecure; some 200,000 people in Northern Bahr El Ghazal and Warrap states have also seen their access to food deteriorate, owing to factors such as price inflation and market disruptions that are tied to the conflict," said UN Food and Agriculture Organization (FAO) Acting Representative, Serge Tissot, in a press release.

"Prompt implementation of the peace agreement is absolutely critical to improving the food situation," he added of the latest international efforts to end the conflict that erupted between President Salva Kiir and his former Vice-President Riek Machar over two years ago, killing thousands, displacing over 2.4 million people, 650,000 of whom fled abroad, and impacting the overall food security of 4.6 million.

FAO, the UN Children's Fund (UNICEF) and the UN World Food Programme (WFP) stressed that the current numbers are particularly worrisome because they show an increase in hunger

during the post-harvest period, when the country is traditionally has most food.

The numbers are expected to peak during the coming lean season, traditionally worst between April and July, when food availability is lowest. Humanitarian partners project that the lean season will start early this year, and the hunger period will be longer than in previous years.

The three UN agencies noted that the dry season, beginning now, could bring additional hardship to people facing the most severe levels of hunger. Those displaced in conflict-affected Unity State, who have been living on fish and water lilies to survive, are running out of their only remaining sources of food as the floods recede.

Livestock raiding has robbed many people of essential animal products like milk, which were their main means of survival during last year's lean season. Unless humanitarian assistance can reliably reach them during the dry season, they face catastrophe in the coming months.

For this reason, the agencies are calling for a speedy implementation of the peace agreement signed last year, and for unrestricted access to conflict areas to deliver much needed supplies to the most affected areas.

"During the dry season, we must make a massive pre-positioning effort so that we can continue assisting people after roads become impassable once the rains come," WFP Country Director Joyce Luma said. "Rising insecurity in Greater Equatoria is hampering delivery of humanitarian assistance through major routes, setting back our efforts to prepare and respond to people who are most in need."

Overall prevalence of emergency levels of malnutrition is also an issue of grave concern, due mostly to inadequate food consumption, along with disease, dietary habits, and constrained health and nutrition service delivery.

"Families have been doing everything they can to survive but they are now running out of options," UNICEF Representative Jonathan Veitch said. "Many of the areas where the needs are greatest are out of reach because of the security situation. It's crucial that we are given unrestricted access now. If we can reach them, we can help them."

WFP delivered food and nutrition assistance to some three million people across the country in the last year, working with 87 non-governmental organizations (NGO) partners and using every tool at its disposal, including airdrops, river barges, cash-based transfers, local food purchases and specialized nutritious foods. 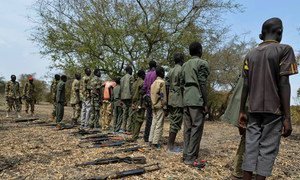