Migration and multilateralism will be hallmarks of 2016, says senior UN official

The world is facing a political, economic, moral and social crisis as governments and communities struggle to provide effective solutions for the unprecedented numbers of people fleeing war, instability or persecution, the top United Nations migration official said today, calling for deceive multilateral action to tackle “the global issues lurking behind today’s vast movement of people.”

The UN Special Representative of the Secretary-General for International Migration, Peter Sutherland, said today in Geneva that 2016 “is the year of migration and multilateralism,” and that series of comprehensive initiatives is needed to drive home – and effectively address – the global nature of the issue.

Indeed, he told reporters, while there has been an understandable focus on migrants arriving on the shores of European countries, this has often obscured the fact that the global dimensions of the phenomenon are very real; 85 per cent of the total numbers of global migrants are moving from developing to developing country.

Yet the response in Europe, for instance to the crisis in Syria, has at times sparked “incipient nationalism,” which is evidenced in xenophobic and racist reactions rather than anything to address the challenges of free movement of people, he said. “But this is not just a European issue, we’ve seen this in the Andaman Sea, in Asia […] in movements from Latin America into North America,” said Mr. Sutherland.

He noted that the conference yesterday in London on the Syria crisis achieved substantial commitments to financial support, particularly to frontline States – Lebanon, Turkey, and Jordan –which are “close to the scene of devastation” and carry an “enormous proportion” of the global refugee population. “European States in comparison are taking minuscule amounts of refugees, and refusing to share in the concept of solidarity that one might have expected,” he stressed.

Highlighting the presence of new razor wire fences, the UN official warned that borders “challenge the moral responsibility” of States to help refugees and provide asylum.

Against this background, one of the main messages that Mr. Sutherland conveyed was that migrants bring significant benefits to their host communities, and that European countries in particular stand to benefit from the influx. “We have to have a greater understanding of the positive values that the migrant communities are bringing to countries who badly need them," Sutherland said.

“The 10 countries with the lowest population growth in the world are in Europe. In 30 or 40 years’ time those who are retired as opposed to those who work will massively have increased in Europe. We have to learn to integrate into our societies those who seek refuge in them,” he added.

As an example, Mr. Sutherland noted that “migrants in general, and in every country in Europe, make greater fiscal contribution than they take in benefits. They have lower levels of unemployment, and in general a greater interest in education. They do not contribute to the current narrative create terrorist threats in large numbers. The handful of those who have been involved in terrorism in Europe have in general been born and brought up in Europe.”

Questions from the audience turned the discussion to the situation in northern France, where the UN refugee agency earlier sounded the alarm on behalf of thousands or refugees and migrants crowding into informal camps in Calais in need of both shelter and adequate protection.

The Office of the UN High Commissioner for Refugees (UNHCR) expressed concern about some 4,000 refugees and migrants currently reported to be living in the Calais "jungle" and almost 2,500 in Grande-Synthe, on the edges of Dunkerque, often in dire circumstances, aggravated by the winter conditions.

At present there are limited facilities that attend to the specific protection needs of children, including those under the age of 15. Among the few is the Maison du jeune réfugié centre in St Omer, which is run by France terre d’asile.

At an earlier press conference, the UN Special Rapporteur on the human rights of migrants, François Crépeau, underscored that addressing the situation is “primarily a French responsibility. But since the people are seeking asylum in [United Kingdom], and they are in France, it is a matter of a societal response – French, British and European.” 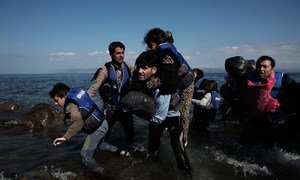