Shelters, schools and health centres in Gaza, the West Bank and Jordan will benefit from $59 million donated by Saudi Arabia to the United Nations Relief and Works Agency for Palestine Refugees (UNRWA) in the Near East under three agreements signed today.

The first agreement for $43.5 million will support ongoing projects in Gaza, including the repair of more than 7,500 shelters for Palestinians whose homes were damaged during the 2014 conflict with Israel and the maintenance of three UNRWA schools.

“I am extremely grateful to the government and the people of Saudi Arabia for the sustained support that the Kingdom has extended to UNRWA over the years,” UNRWA Commissioner-General Pierre Krähenbühl said in London, where he signed the agreements with Saudi Fund for Development (SFD) Managing Director Yousef al-Bassam.

“Their contributions have made an enormous difference in the lives of thousands of Palestine refugees. I would like to express particular appreciation for the role played by the Saudi Fund for Development in delivering Saudi assistance. Our partnership with the Fund is deeply rewarding.”

Saudi Arabia has contributed more than $500 million to UNRWA to date. Over the past three years, it has become the Agency's third largest donor.

“UNRWA is playing a vital role in providing basic needs and social services for Palestine refugees,” Mr. al-Bassam said. “The Government of Saudi Arabia, through the Saudi Fund for Development, will continue its support to the Palestinian people in all fields,” he added. 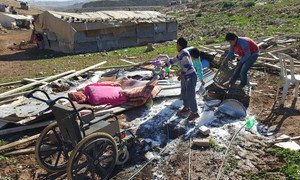 Condemning the demolition by Israeli authorities of the homes of Palestinian Bedouins in the West Bank, a senior United Nations relief official today called on Israel to end such destruction and halt its plans to forcibly relocate Bedouin families.