UN envoy for Syria meets with Government delegation in Geneva

The United Nations Special Envoy for Syria today met with a delegation from the country’s Government, one day after meeting with representatives of the opposition High Negotiation Committee (HNC), which he said had officially begun the UN-mediated intra-Syrian talks in Geneva.

Special Envoy Staffan de Mistura is also expected to issue invitations to Syrian women and civil society representatives to contribute to the talks, being held in Geneva between representatives of the Syrian government and the opposition.

“Both women and civil society organisations can provide vital ideas and insight to the talks by presenting the views and recommendations of important segments of Syrian society,” Deputy UN Spokesperson Farhan Haq told reporters in New York.

“Mr. de Mistura, heeding the call by many Syrian women to meaningfully be able to contribute to the talks and the guidance provided by Security Council

eesolution 2254, has established an independent Women’s Advisory Board to the Office of the UN Special Envoy for Syria,” he noted.

The Advisory Board will allow Syrian women to articulate their concerns and ideas covering all topics discussed during the talks, and present recommendations to the UN Special Envoy for consideration. The Board will initially be composed of a group of 12 women chosen by several Syrian women organizations through their own consultative process.

Mr. de Mistura has said the Geneva meetings will start with proximity talks and are expected to last for six months, with Government and opposition delegations sitting in separate rooms and UN officials shuttling between them, with the immediate priorities being a broad ceasefire, humanitarian aid, and halting the threat posed by the Islamic State of Iraq and the Levant (ISIL). 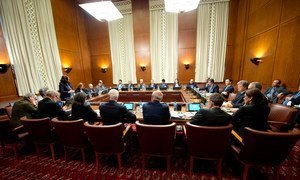 The delayed intra-Syrian talks to end five years of bloody warfare officially started in Geneva today with two hours of talks between the United Nations mediator and the opposition High Negotiations Committee (HNC).