Edward Parsons/IRIN
On the Temple Mount in the Old City of Jerusalem, Israel, Muslims leave the Dome of the Rock after Friday prayers. Police presence is always tight and young males are not allowed or have their ID’s seized going in.
1 February 2016
Peace and Security

In Israel and the occupied Palestinian territories, 2016 has begun much as 2015 ended — with unacceptable levels of violence and a polarized public discourse. That polarization showed itself in the halls of the United Nations last week when I pointed out a simple truth: History proves that people will always resist occupation.

Some sought to shoot the messenger — twisting my words into a misguided justification for violence. The stabbings, vehicle rammings and other attacks by Palestinians targeting Israeli civilians are reprehensible. So, too, are the incitement of violence and the glorification of killers.

Nothing excuses terrorism. I condemn it categorically.

It is inconceivable, though, that security measures alone will stop the violence. As I warned the Security Council last week, Palestinian frustration and grievances are growing under the weight of nearly a half-century of occupation. Ignoring this won’t make it disappear. No one can deny that the everyday reality of occupation provokes anger and despair, which are major drivers of violence and extremism and undermine any hope of a negotiated two-state solution.

Israeli settlements keep expanding. The government has approved plans for over 150 new homes in illegal settlements in the occupied West Bank. Last month, 370 acres in the West Bank were declared “state land,” a status that typically leads to exclusive Israeli settler use. 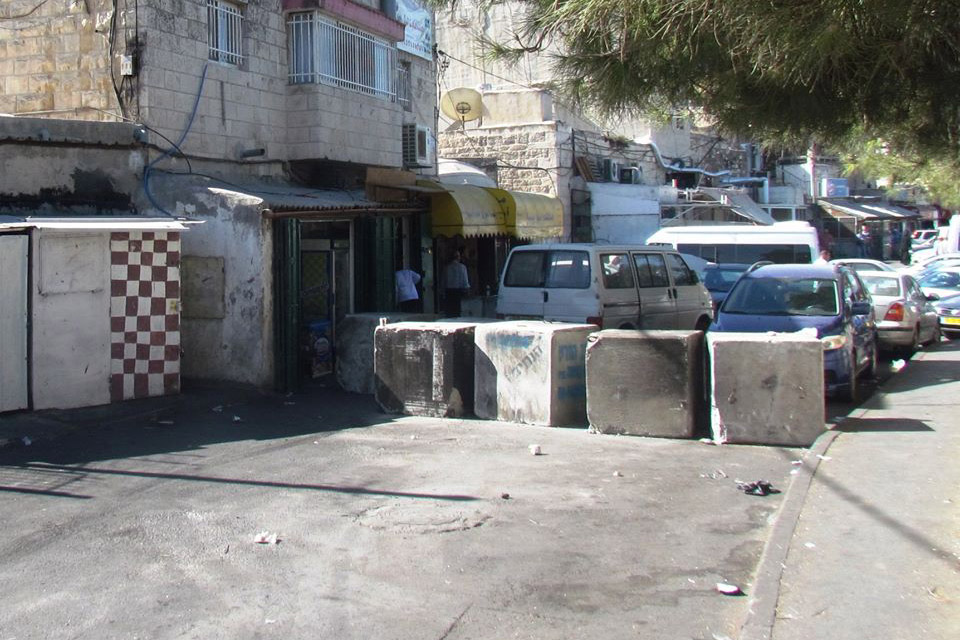 In At Tur, near Al Maqassad hospital in East Jerusalem, one of several roadblocks, placed by Israeli forces in October 2015 in Palestinian neighbourhoods, as the wave of violence across the occupied Palestinian territory and Israel continued. Photo: OCHA

At the same time, thousands of Palestinian homes in the West Bank risk demolition because of obstacles that may be legal on paper but are discriminatory in practice. Palestinians — especially young people — are losing hope over what seems a harsh, humiliating and endless occupation. Israelis are also reeling from near-daily attacks and losing sight of the possibility of a comprehensive peace with the Palestinians.

Along with the United States, the European Union and the Russian Federation, the United Nations is calling for substantial changes in policy to strengthen the economic, institutional and security pillars of the Palestinian Authority. We are engaging with Arab countries in the region to harness the support that both sides need to bring peace and security to Israelis and Palestinians alike.

We continue to work with Israel and the Palestinian Authority to rebuild Gaza and prevent another devastating conflict, and to press Palestinians for genuine national reconciliation. Of course, a lasting agreement between Israel and Palestine will require difficult compromises by leaders and peoples on both sides. Israeli authorities need to unequivocally support the Palestinian Authority and Palestinian institutions. This requires significant shifts in policies toward the West Bank and Gaza, while safeguarding Israel’s legitimate security concerns.

Such steps can start with housing, water, energy, communications, agriculture and access to natural resources. Specifically, they should include immediate approval of master plans proposed by Palestinian communities in the Israeli-controlled Area C of the West Bank, which will enable investment and development.

For their part, Palestinians must make political compromises to bring Gaza and the West Bank under a single, democratic governing authority according to principles laid down by their national umbrella organization, the Palestine Liberation Organization. This also means consistently and firmly denouncing terrorism and taking preventive action to end attacks on Israelis, including an immediate stop to Gaza tunnel construction.

I will always stand up to those who challenge Israel’s right to exist, just as I will always defend the right of Palestinians to have a state of their own. That is why I am so concerned that we are reaching a point of no return for the two-state solution. And I am disturbed by statements from senior members of Israel’s government that the aim should be abandoned altogether.

The stalemate carries grave risks for both sides: a continuation of the deadly wave of terrorism and killings; the collapse of the Palestinian Authority; greater isolation of and international pressure on Israel; and a corrosion of the moral foundation of Israeli and Palestinian societies, ever more inured to the pain of the other.

Criticism of the United Nations — or attacks against me — comes with the territory. But when heartfelt concerns about shortsighted or morally damaging policies emanate from so many sources, including Israel’s closest friends, it cannot be sustainable to keep lashing out at every well-intentioned critic.

Everyone is free to pick and choose what they like or dislike from speeches. But the time has come for Israelis, Palestinians and the international community to read the writing on the wall: The status quo is untenable. Keeping another people under indefinite occupation undermines the security and the future of both Israelis and Palestinians.

This opinion piece by UN Secretary-General Ban-Ki-moon appeared in The New York Times on 31 January 2016.

INTERVIEW: The toughest spokesperson's job in the world? A decade speaking out for Palestinian humanitarian needs

Amid ongoing violence in the Middle East, United Nations Secretary-General Ban Ki-moon reiterated today that he can understand why Palestinians are losing hope in the face of nearly 50 years of Israeli occupation, a statement that has provoked criticism that he was “giving terror a tailwind.”