UN Photo/Eskinder Debebe
Secretary-General Ban Ki-moon speaks during a meeting of the Peace and Security Council in Addis Ababa.
29 January 2016

United Nations Secretary-General Ban Ki-moon today, in an address to the African Union Peace and Security Council, spotlighted three topics high on the regional body's agenda – counter-terrorism, and the ongoing crises in both South Sudan and Burundi – all of which require urgent attention at the continental-level and from the wider international community.

“Burundi has descended into a deep political crisis in the past nine months. The country now stands perilously close to the brink,” said Mr. Ban, addressing the Council at the start of his three-day visit to Addis Ababa, Ethiopia to attend the African Union (AU) Summit.

Commending the leadership of the AU the East African Community for the steps taken so far to prevent a further escalation of the violence, the Secretary-General said: “You have already made an important difference.”

Moreover, by authorizing deployment of the prevention and protection mission known by the acronym, MAPROBU, “this Council has sent a strong signal to the entire continent and the world that you will not stand by while the violence escalates and human rights abuses continue unpunished.”

“Now we must do everything we can to put in place an inclusive political process. We will work with our partners to support dialogue and find ways to prevent a further deterioration of the situation, through my Special Adviser, Mr. Jamal Benomar, and his team, and the rest of the UN presence on the ground,” said the UN chief, noting that 15 years ago, the commitment of regional governments and the support of the international community led to the Arusha Agreement, which ended decades of terrible violence in Burundi. 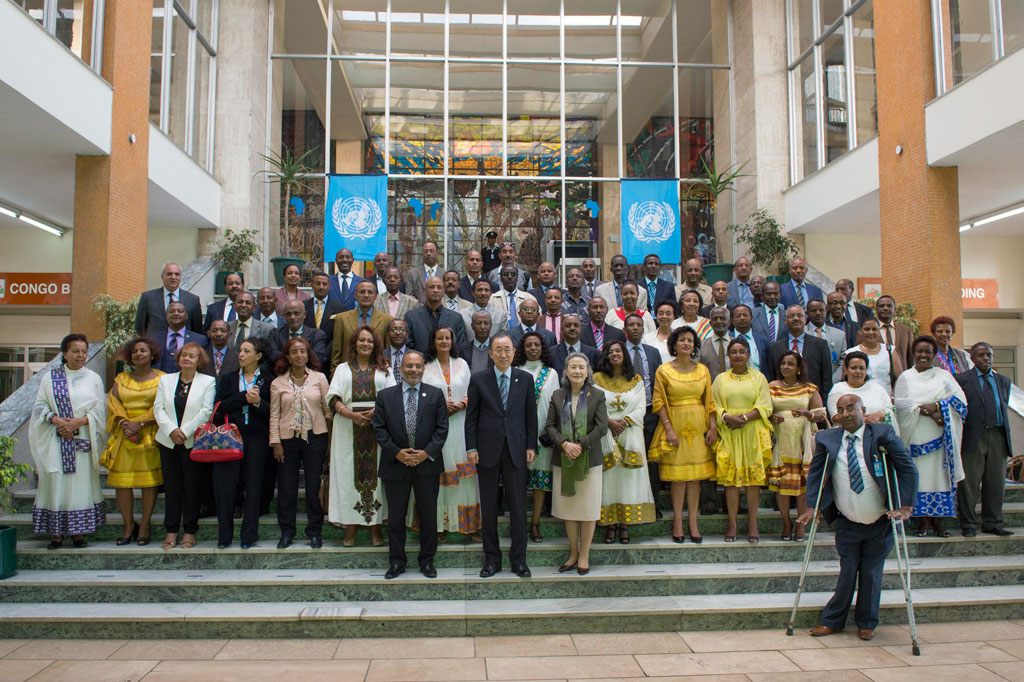 A group photo of Secretary-General Ban Ki-moon with members of ECA staff and the UN Country team as they gather for a town hall meeting in Addis Ababa, Ethiopia. UN Photo/Eskinder Debebe 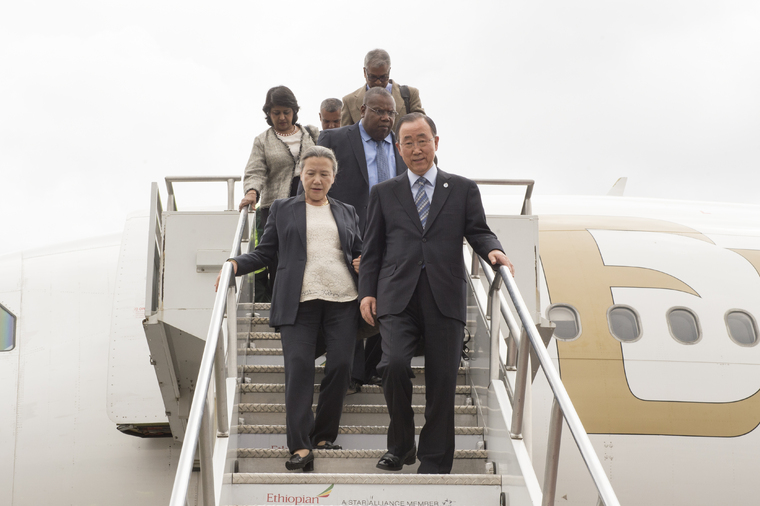 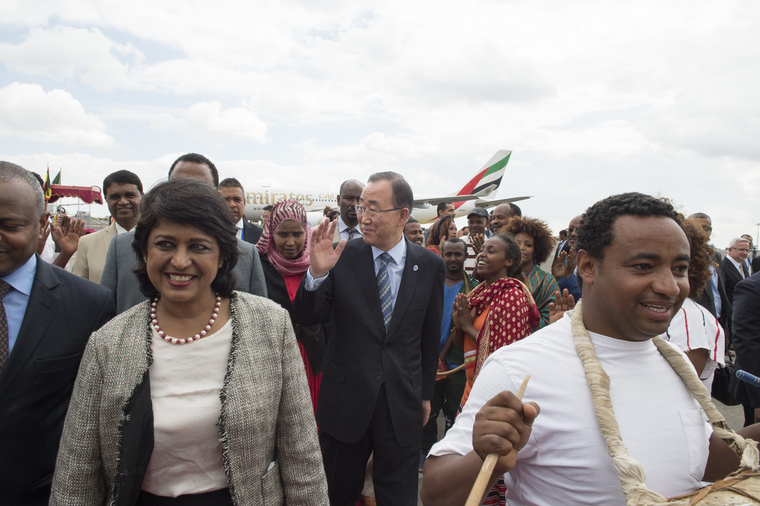 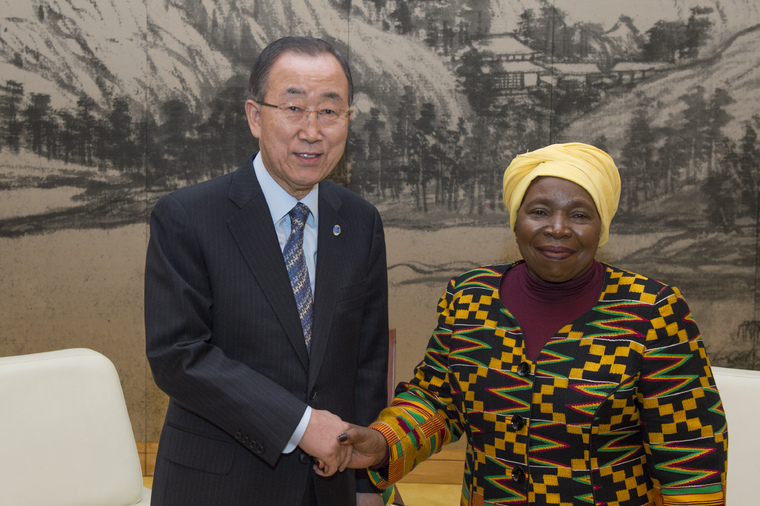 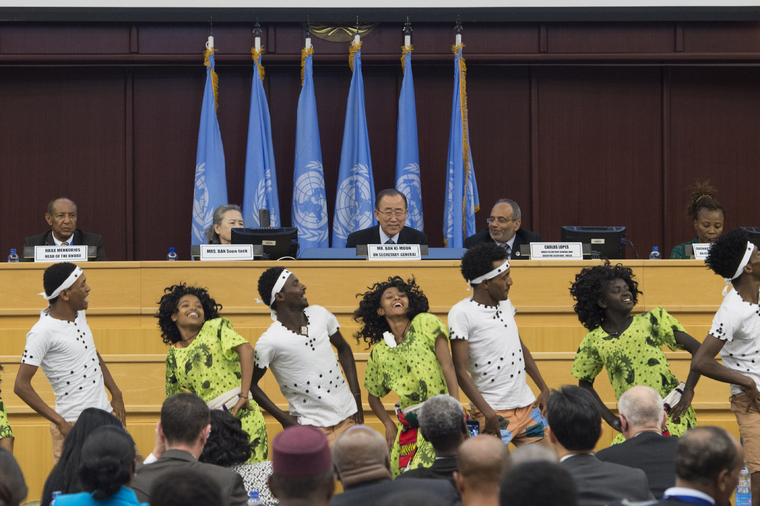 Secretary-General Ban Ki-moon and those gathered for a Town Hall Meeting with ECA staff and the UN Country Team in Addis Ababa, Ethiopia, are entertained by dancers. UN Photo/Eskinder Debebe

“Today, I am convinced that Burundi can be brought back from the brink. But we must all urgently direct our efforts in the same spirit and towards that same goal,” he said.

Turning to the situation in South Sudan, the Secretary-General said he was deeply disappointed that the signatories to the peace agreement had failed to meet the 22 January deadline for the formation of the Transitional Government of National Unity.

“I call on all parties urgently to resolve the disputes that are preventing the establishment of the government. The parties must place the interests of their young nation and its people, who have suffered long enough, above their own,” said Mr. Ban, adding that it is critical that AU member States and the Inter-Governmental Authority on Development (IGAD), hold the signatories accountable for following through on their commitments.

He went on to say that Terrorism and violent extremism are a growing threat on the continent. Indeed, Al-Shabaab, Al Qaeda in the Islamic Maghreb, Boko Haram, and the Lord's Resistance Army had established a presence and expanded their activities across borders. Terrorism is also impacting peace operations, particularly in Mali and Somalia. The radicalization and recruitment of young men and women is a cause for great concern.

“I commend the African Union's efforts to strengthen its counter-terrorism efforts by coordinating its activities. Sub-regional initiatives are another welcome development,” he continued, noting that the new programmes make the need for coordination and partnership between the AU and the UN even more urgent, across a broad spectrum of activities.

“As I have said before, bullets may stop terrorists, but only development, good governance and respect for human rights can prevent terrorism,” he underscored, recalling that he had recently launched a UN Plan of Action to Prevent Violent Extremism which provides more than 70 recommendations to Member States and the United Nations System.

It recommends that Member States consider adopting their own national plans, and that regional organizations cooperate on border security, kidnapping and terrorist financing. “I hope the African Union will back a consensus resolution to support the Plan in the General Assembly, which will convey a strong message of unity in the face of violent extremism. African Governments must be at the forefront of this effort,” said Mr. Ban.

Among his other activities today, the Secretary-General met with Nkosazana Dlamini-Zuma, Chairperson of the AU Commission. They discussed UN-AU cooperation and committed to deepening the strategic partnership in conflict prevention, management and resolution, as well as continue to seek ways to find flexible, predictable and sustainable funding to AU operations authorized by the Security Council. They also discussed the situations in a number of countries where the UN and AU are cooperating, including Burundi, Libya, South Sudan and Somalia.

The Office of the United Nations High Commissioner for Human Rights (OHCHR) reported today that a team of independent experts mandated to probe violations and abuses in Burundi has not been able to enter the country.