The United Nations Special Rapporteur on the situation of human rights in the Democratic People’s Republic of Korea (DPRK) today called on the international community to further all efforts to improve the human rights situation in the country.

“In addition to continuing political pressure to exhort the DPRK to improve human rights, it is also now imperative to pursue criminal responsibility of the DPRK leadership,” said Marzuki Darusman in Tokyo at the end of his last official visit as a UN Human Rights Council’s independent expert.

Commission of Inquiry,” the Special Rapporteur, whose mandate ends in July 2016, added.

According to the Office of the UN High Commissioner for Human Rights (OHCHR), since his appointment in 2010, Mr. Darusman has made several requests to visit DPRK; however, access was never granted. He has been visiting other countries in the region such as Japan, Thailand and the Republic of Korea.

“I regret to say that any act that can be construed as violence against the international community has negative implications on the human rights situation in the DPRK,” the expert stressed, noting that his visit to Japan took place following the latest nuclear test by the North Korean Government.

During his five-day mission, Mr. Darusman met with family members of victims of abduction and representatives of civil society organizations. He also met with the Minister for Foreign Affairs, the Minister in charge of the Abduction Issue, high-level officials from the Cabinet Intelligence, Ministry of Foreign Affairs, Cabinet Headquarters on the Abduction Issues and parliamentarians, as well as officials of the Ministry of Justice, the Supreme Court and the National Police Agency.

“I am disappointed that there has been no concrete progress since Japan and the DPRK signed a bilateral agreement almost two years ago to work towards a resolution of this issue,” he stressed. “I urge the DPRK to meet their commitment to the agreement and resume actively steps to restore the confidence between Japan and the DPRK.”

During his discussion with family members of victims of abduction and the Minister in charge of the Abduction Issue, the expert recalled that the former Supreme Leader of the DPRK, Kim Jong-il, acknowledged that the country had been involved in abductions of Japanese citizens.

“Such an acknowledgement, without concrete and comprehensive solutions, naturally raises suspicion that the country continues to be involved and implicated in the abductions,” he said. “We are therefore on a clear path and engaged in a just cause to pursue a final settlement of abduction of Japanese nationals, but also possibly of other nationals.”

“Abduction, as a form of enforced disappearance, is a continuous crime, which does not end until the victim’s family learns of the whereabouts of their loved one and, where possible, the survivors are immediately returned to their families,” the expert noted. “Resolving the abduction issue is a matter of urgency. The families of victims are advancing in age.”

The Special Rapporteur underscored that the issue also affects the international community. “Progress on the abduction issue will contribute to the beginning of building trust and good will. Failure to act will undermine any good will that any future engagement might be undertaken with reasonable measures of trust,” he said.

The Special Rapporteur will report his findings and recommendations to the UN Human Rights Council in March 2016.

♦ Receive daily updates directly in your inbox - Subscribe here to a topic.
♦ Download the UN News app for your iOS or Android devices.
DPRK

Annan welcomes agreement to re-start talks on DPR of Korea 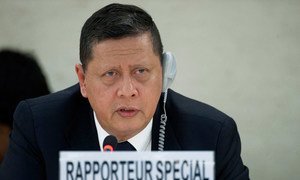