UNICEF/Ashley Gilbertson VII
Migrants wait in line to be registered in Berlin, Germany.

As UN High Commissioner for Refugees, Filippo Grandi, heads the agency tasked with protecting, assisting and finding solutions for refugees, internally displaced people and stateless populations. A veteran UN official who was most recently Commissioner-General of the UN Relief and Works Agency for Palestine Refugees in the Near East (UNRWA), Mr. Grandi spoke with the UN News Centre just days after taking up his new post about his priorities, the critical shortfalls in humanitarian funding and what motivates him to work with refugees.

UN News Centre: You’ve just taken up your post as High Commissioner for Refugees. Can you tell us what your priorities are going to be?

Filippo Grandi: Forced displacement of refugees, internally displaced people and other people seeking refuge from war, human rights violations and other forms of hardship has become a very central feature, unfortunately, of our world. The number of people of concern to my office, to UNHCR, has multiplied and we’re now dealing with 60 million, plus 10 million stateless women and men. And this is a staggering figure, the highest that has existed since the Second World War. So our priorities are really to ensure that all of these people enjoy protection of their lives and rights, and that we are able to respond to numerous emergencies, created mostly by war. And a very important priority, which is enshrined in our mandate, is also to help States seek solutions for these people. 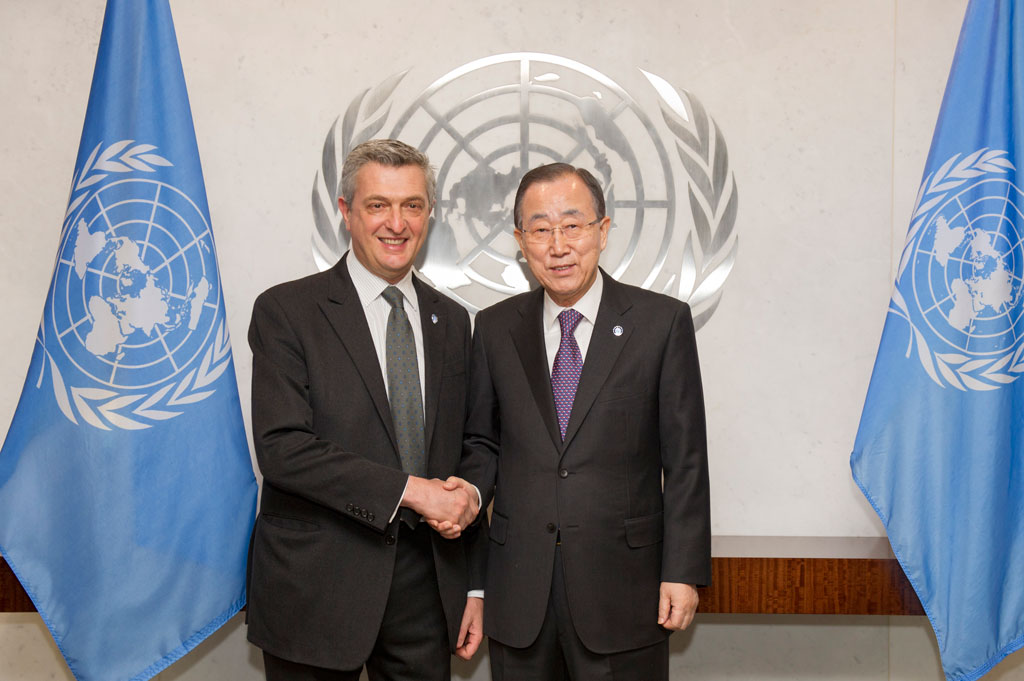 UN News Centre: UNHCR and other agencies launched an appeal for nearly $8 billion for the Syrian crisis. How do you plan to make that happen when financing has been an issue?

Filippo Grandi: Yes, this is a major problem. We managed to keep the financial ask in that huge appeal – which is for inside Syria, internally displaced and other people in need, and for outside Syria, for refugees and for host communities and States hosting them – we managed to keep the ask at a level which is not much higher than last year, although the needs have multiplied as you can imagine. The real problem here is that on the one hand, the volume is such and there are so many other crises that these appeals are on average 50, 60 per cent funded, which means that part of the needs are not met. This creates additional hardships on host communities but also on refugees.

Filippo Grandi discusses his agency's priorities and why assisting the most vulnerable is so important to him. Credit: United Nations

We’ve seen this very clearly in the Syria crisis – people receiving insufficient assistance, moving on to other countries, in particular to Europe. This is not the only cause for this secondary movement but certainly it is an important cause. This is how people in the end use trafficking networks, die in the sea, and go through very difficult journeys towards other countries, causing, in doing so, further problems… or becoming a very difficult issue to deal with.

Let me just add here that to address this particular phenomenon, we’re working with States on another conference which will take place in Geneva at the end of March which will address the issue of how we can help people that want to move from first asylum countries to other countries… thus, sharing the burden better. How can we help them follow legal ways to get out rather than adopt or go through trafficking networks… so resettlement, scholarships, family reunification and so forth. 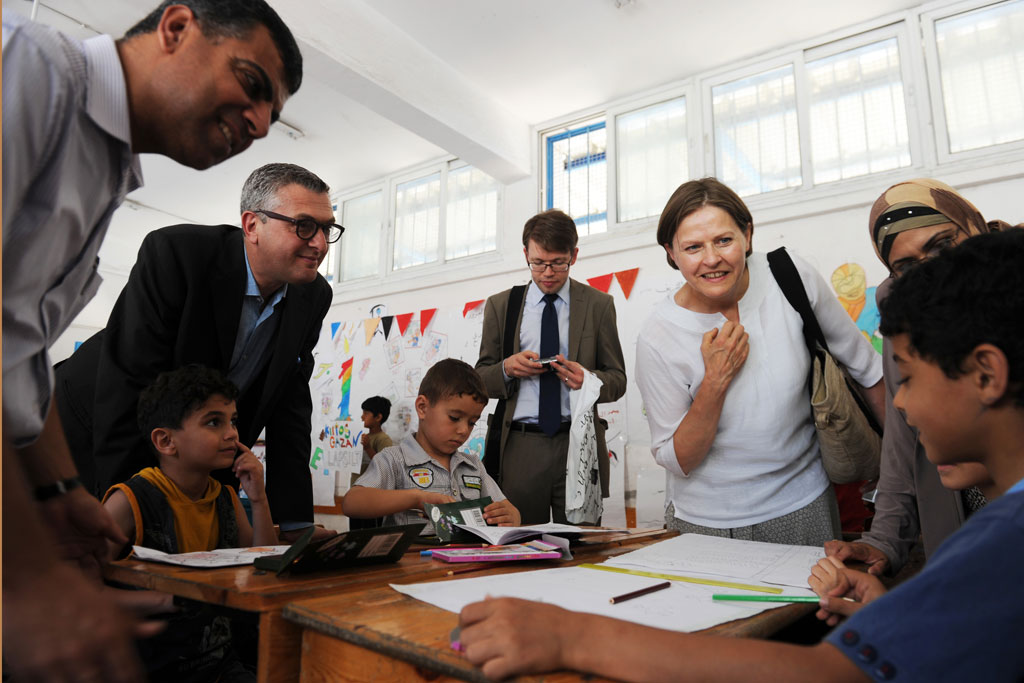 In June 2013, then UNRWA Commissioner-General Filippo Grandi (second from left) accompanies Heidi Hautala, Finnish Minister for International Development, during a visit to the Summer Fun Weeks programme in Gaza which provides activities such as football, kite flying and drawing for the territory’s children. UN Photo/Shareef Sarhan

I elaborated a bit on your question to show that the lack of funds has many consequences, but until the war ends in Syria and in many other places, not just in Syria… Yemen, Libya, many countries in Africa and so forth… until there is a peace process that is successful and peace holds, the cost of the consequences will continue to rise.

Filippo Grandi: Which calls for, number one, solidarity towards the victims. Number two, or perhaps another number one, really looking at mechanisms to solve conflicts. The mechanisms that are in place are old ones. There has to be much more political will and better configuration of this mechanism to make them effective and find quicker solutions. On our side, we will continue to be very innovative, I can assure you, in how we take care of those that are the victims of this situation – internally displaced, refugees and others – and since we have to do more and more with less and less, innovation is indispensable. 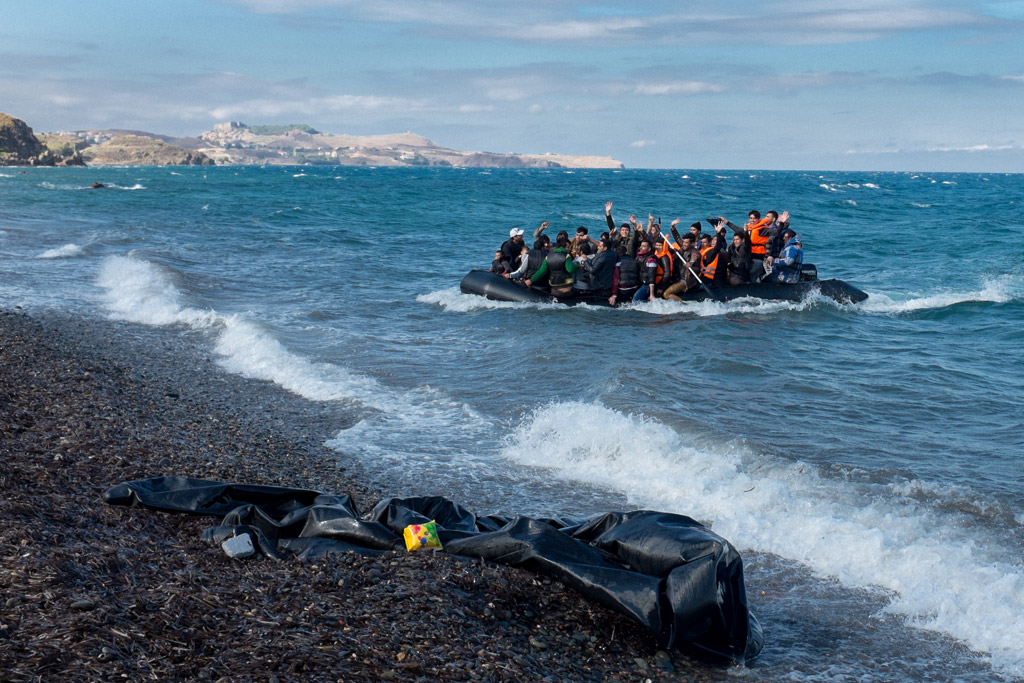 Newly-arriving refugees wave as the large inflatable boat they are in approaches the shore, near the village of Skala Eressos, on the island of Lesbos, in the North Aegean region of Greece. Photo: UNICEF/Ashley Gilbertson VII

UN News Centre: You’ve worked with refugees throughout your career, and you’ve taken on this very challenging post now at a moment, as you’ve said, of crises. What is it that makes you want to work for refugees? What is it that has made you want to take this position on?

Filippo Grandi: You know there’s a lot of discussion about vulnerable people. The central theme of the Sustainable Development Goals is no one left behind. I think very few categories around the world are as vulnerable as refugees, internally displaced people, stateless people. It is very important that we don’t leave them behind. I have worked with refugees since I was a young volunteer. I know the pain of exile very well from having experienced it in many places. And this has given me the motivation to continue to work for people. This is not bureaucratic, abstract work. This is very concrete and person to person.

UN News Centre: Can you tell us a story that impacted you?

Filippo Grandi: When I was a young volunteer, I visited for the first time a refugee camp in Thailand. In those days, there were Cambodian refugees and I saw a small child die of malaria in front of me. This affected me greatly because I realized that this child would never have died in another context but because he was in that refugee camp, because he was a refugee, he died. And this was a powerful, if dramatic, motivation to start working for refugees, and here I am 30 years later still doing it. 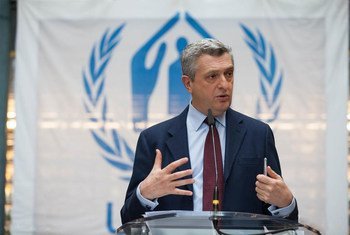 7 January 2016
With record numbers of refugees and displaced people worldwide, the new head of the Office of the United Nations High Commissioner for Refugees (UNHCR) is urging greater diplomatic efforts to find solutions to the conflicts and abuses driving people from their homes.