20 January 2016
Senior United Nations officials for the occupied Palestinian territory have called for an immediate end to Israeli plans to transfer Bedouin living in the Jerusalem area for a settlement expansion, long recognized as a violation of international law and an obstacle to realizing a two-state solution to the Middle East crisis.

“I am once again deeply alarmed to witness Israel’s relentless push towards removing Bedouin Palestine refugees from their homes, destroying their livelihoods and their distinct culture,” said Felipe Sanchez, Director of Operations in the West Bank for UN Relief and Works Agency for Palestine Refugees in the Near East (UNRWA).

“The children in these communities should not be experiencing the trauma of displacement that preceding generations already experienced,” he added.

Mr. Sanchez and the Coordinator for Humanitarian and UN Development Activities for the Occupied Palestinian Territory, Robert Piper, issued their call after a visit with diplomats from 17 countries yesterday to the Palestinian Bedouin community of Abu Nuwar, site of recent demolitions and aid confiscations by the Israeli authorities.

Twenty-six Palestine refugees, among them 18 children, including four with disabilities, were displaced on 6 January following the destruction of their homes, and other basic structures. On 10 and 14 January, Israeli authorities confiscated eight donor-funded residential tents that had been provided to the families as post-demolition humanitarian response.

“We came to Abu Nuwar to hear first-hand what residents have been through,” Mr. Piper said. “We left with a strengthened resolve to continue our support to them.”

Abu Nuwar is located in the so-called E1 area, planned by Israel for the expansion of Ma’ale Adummim settlement, and is among 46 communities in the central West Bank, most of them Palestine refugee communities, slated for transfer to three designated sites away from their current location.

A forced relocation of Bedouin communities to urbanized townships would threaten their culture and livelihoods, the two officials said. Bedouin families that were already “relocated” in the 1990s lost their income sources while their communities’ social fabric was severely damaged.

UN Secretary-General Ban Ki-moon has already stated that the implementation of Israel’s proposed “relocation” would amount to forcible transfers and forced evictions, contravening its obligations as an occupying power under humanitarian law and human rights law.

“The destruction of property in this manner and the denial of donor-funded assistance to vulnerable Palestinian communities is unacceptable,” Mr. Piper said.

“Under international law, Israel is responsible for meeting the needs of Palestinians living under its occupation and for facilitating humanitarian assistance, not for obstructing aid and pressuring residents to leave so that Israeli settlements can expand. The international community must ensure that plans to transfer these communities are revoked, if the two-state solution is to be protected,” he said.

The two-state solution forms the main plank of efforts by the diplomatic Quartet, comprising the UN, European Union, Russia and the United States, to solve the Middle East crisis, with two states – Israel and Palestine – living side by side in peace and security. 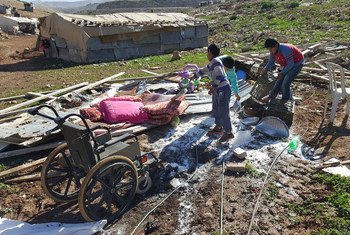 7 January 2016
Condemning the demolition by Israeli authorities of the homes of Palestinian Bedouins in the West Bank, a senior United Nations relief official today called on Israel to end such destruction and halt its plans to forcibly relocate Bedouin families.