UN must get ‘priorities right’ in 2016, Ban tells Member States, calling for ‘more and better work’

Sharing his thoughts on the direction of the United Nations’ work in 2016, Secretary-General Ban Ki-moon today said the global community begins the year needing to get its “priorities right,” while underlining that more and better work needs to be done.

“This is a moment heavy with responsibility,” Mr. Ban told delegates during an annual informal briefing to the General Assembly. “Year one of the new 15-year agenda, and year 10 of my 10-year mandate. One year may seem very short in UN time. But I believe we can make it dynamic and productive.”

The UN chief began by declaring that 2016 must be a year in which landmark decisions on sustainable development “gain solid footing on the ground.”

“If 2015 was a year of global sustainable development action, 2016 must be a year of national SDG traction,” he stated, after congratulating Member States for adopting the Paris Agreement on Climate Change and the 2030 Agenda for Sustainable Development, a set of 17 goals and 169 targets to wipe out poverty, fight inequality and tackle climate change over the next 15 years.

Underlining that gender equality is at its heart, the UN chief said progress has been “too slow and uneven.”

“I have seen too many parliaments, ministries, cabinets, board rooms and peace processes with few or no women at the table,” he regretted. “Sadly, that has sometimes been the case within this Organization. I have worked determinedly to change this – with some inroads but much distance still to travel,” he said.

Recalling that climate action is good for people and the planet, beneficial for the economy, and essential for achieving the Sustainable Development Goals (SDGs), Mr. Ban called the Paris Agreement a turning point.

“I encourage leaders to continue providing direct political oversight and guidance on climate,” he said. “We have no time to lose and much to gain by acting now. I will spare no effort to ensure the early entry into force of the Paris Agreement,” he underscored.

In his remarks, the President of the General Assembly, Mogens Lykketoft, echoed the strong linkage between the SDGs and climate change, reminding delegates that a high-level signing ceremony of the agreement is scheduled in New York on 22 April.

Mr. Ban also listed a number of other events taking place in the upcoming year, such as the Special Session of the General Assembly on the World Drug Problem, and the General Assembly High-level Meeting on Addressing Large Movements of Refugees and Migrants, and the UN Economic and Social Council (ECOSOC) Youth Forum in February. On the issue of youth, he also noted that 2016 will set in motion the first-ever UN system-wide Global Initiative on Decent Jobs for Youth.

Turning to peace and security matters, the Secretary-General said the global community must end the conflicts that global divisions have helped prolong, and do far more to protect vulnerable populations.

“Today, the price of neglecting prevention is plain to see: widening sectarian tensions, shrinking democratic space in many places, and an arc of crisis stretching from the Sahel to the wider Middle East,” he stressed, noting that across the world more than 125 million people need humanitarian assistance.

Tomorrow, he is expected to present a Plan of Action to Prevent Violent Extremism. “Our challenge is to defeat Da-esh, Boko Haram, al-Shabaab, Al Qaeda and other such groups –without defeating ourselves through counter-productive approaches that fuel the extremism we are trying to extinguish.”

Drawing attention to recent events in the Middle East, Mr. Ban recalled the “shocking scenes” and stories that have emerged from Madaya, Syria, as humanitarian workers finally gained access after being blocked since October.

“The town has been the victim of deliberate starvation – the use of food as a weapon of war – a clear war crime,” he stressed, calling for immediate, unconditional and unimpeded humanitarian access. “All sides in the Syria conflict are guilty of heightening the suffering of civilians – of committing unconscionable abuses.”

He noted that with his Special Envoy, they will continue to press for the convening of a further round of political talks on 25 January, and not let regional tensions derail the “quest to end this war.”

On the issue of people fleeing conflict and disaster, the Secretary-General recalled that arrivals in Europe were less than two per cent of the world’s 60 million refugees and displaced, as he called for support to reach all people yearning for a stable home.

“Afghans, Somalis, Congolese and South Sudanese fleeing a resurgence of fighting; the Rohingya of Myanmar, escaping threats by extremist Buddhists; Eritreans escaping repressive governance; and all those who have languished for generations in camps from Dadaab in Kenya to Dheisheh in the West Bank.”

Nuclear disarmament was also featured as a top priority in 2016, with Mr. Ban underlining that nuclear weapons are an “existential threat to humanity.” He warned that countries that regard their security “as a matter of retaining or attaining nuclear weapons are only increasing risk – their own and the world’s.”

Ending his remarks, Secretary-General Ban Ki-moon said the international community has much work still to do, including strengthening the UN itself and addressing its own shortcomings.

“Our place must be with the boy fleeing conflict, the girl denied a seat in the classroom, and the children still at risk of dying of preventable causes before their fifth birthday. We must stand with women and men facing daily discrimination, and with millions still living in extreme poverty,” he concluded.

As Secretary-General Ban Ki-moon embarks on his final year in office, President Lykketoft told the Assembly he wishes him the very best in strengthening the effectiveness of the Organization and assisting Member States in addressing common global challenges. 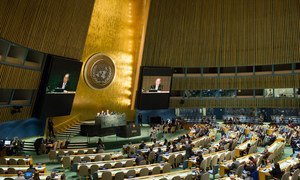 Secretary-General Ban Ki-moon applauded Member States on Wednesday night for adopting a budget of $5.4 billion for the United Nations to carry out its vital work during the 2016-2017 biennium.