Presenting the key findings of the latest United Nations survey on international migrant trends, the UN Deputy Secretary-General today stressed that the issue of migration is one of the most challenging and important that the Organization is taking on in the new global landscape.

Presenting the key finding of the latest United Nations survey on international migrant trends, the UN Deputy Secretary-General today stressed that the issue of migration is one of the most challenging and important that the Organization is taking on in the new global landscape.

“When we get into a period of dealing with the migration and refugee issues, it’s important that we have the facts,” Jan Eliasson told reporters at a press briefing, at UN Headquarters, thanking the UN Department of Economic and Social Affairs (DESA) for producing the latest international migration report.

The senior UN official was speaking alongside Karen AbuZayd, the new Special Adviser on a meeting scheduled next September called the Summit on Addressing Large Movements of Refugees and Migrants, as well as Bela Hovy, from DESA’s Population Division.

These figures, Mr. Eliasson explained, also include 20 million refugees for the purpose of “statistical correctness” and despite there being a “different legal regime” for them as compared to migrants.

“Not included in this figure […] are around 40 million internally displaced people – refugees inside a country,” he added.

Offering additional details, Mr. Hovy said that the motive of migration is not taken into account when DESA produces statistics on international migrants, and that the numbers include people who may have arrived to their new place of residence 10 to 40 years ago.

Meanwhile, two thirds of all international migrants were reported to be living in only 20 countries, with the largest number in the United States – about a fifth of the world’s total migrants. The next in line is Germany, followed by Russia, and Saudi Arabia.

Turning to refugees, they are mainly in Pakistan, Lebanon, Iran, Jordan – and come mainly from three countries – Syria, Afghanistan and Somalia.

“What I found particularly interesting is how important migration has been for population growth, which is sorely needed in certain parts of the world,” Mr. Eliasson stated.

“In Europe, the size of the population would have fallen between 2000 to 2015, in the absence of positive net migration, so here is something related to what I would call the positive narrative about migration and refugees – the contribution to the demographics […] and of course what they do in terms of remittances.”

The Deputy Secretary-General highlighted that remittances to international migrants’ countries of origin is about two or three times bigger than the official development assistance in the world, which supports many health and education efforts worldwide.

One of the most important global events on refugee and migrant flows will take place on 19 September in New York, led by Ms. AbuZayd, who will begin meeting with Member States starting next month and work closely with DESA and other UN partners in the lead up to it.

“The summit is intended to work towards solutions as a global community,” Ms. AbuZayd underlined. “Because I think that many countries that may not have much to do with migration or with refugees may also want to come in and contribute and participate in this action working toward solving this problem.” 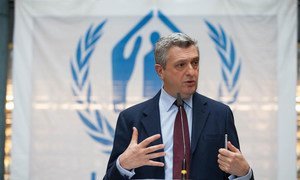 With record numbers of refugees and displaced people worldwide, the new head of the Office of the United Nations High Commissioner for Refugees (UNHCR) is urging greater diplomatic efforts to find solutions to the conflicts and abuses driving people from their homes.