“The Secretary-General stresses that United Nations staff must never be threatened or sanctioned for doing their work, which is based on the United Nations Charter,” a statement issued by his spokesman said.

According to media reports, the Yemeni foreign ministry said the head of the UN High Commissioner for Human Rights (OHCHR) office in Yemen had not been “impartial” in assessing the human rights situation in the country.

“The Secretary-General recalls that the people of Yemen have suffered grave human rights violations. OHCHR is actively and effectively helping to document these violations and promote and protect their rights, while strengthening justice and accountability,” the statement said.

“The Secretary-General reiterates his full confidence in the representative of the Office of the High Commissioner for Human Rights in Sana’a and urges the Government of Yemen to reconsider its position on his expulsion.”

Earlier today, the UN health agency called on all factions to allow immediate unconditional access, noting that more than 250,000 people have been living under virtual siege in the central city of Taiz since November, with convoys of life-saving medicines blocked.

“In times of crisis, it is vital that health facilities remain functional and provide people in need with uninterrupted access to life-saving medical care,” the UN World Health Organization (WHO) said in a news release, citing the deteriorating health situation in Taiz, where the city's six hospitals are overwhelmed with injured patients and have been forced to partially close services.

“Humanitarian organizations are struggling to deliver medical and surgical supplies due to the insecurity,” it added in the latest of a series of appeals calling for humanitarian access. “Five WHO trucks carrying medicines and medical supplies have been prevented from entering the city since 14 December 2015.

“The trucks contain trauma medicines, medicines for the treatment of diarrhoea, and other health supplies that urgently need to be delivered to Al-Thawra, Al-Jumhoori, Al-Rawdha and Al-Mudhaffar Hospitals. Three of the trucks are carrying 500 cylinders of oxygen that are critically needed by the hospitals.

“WHO calls on all parties involved in the conflict to allow the secure movement and delivery of medical and humanitarian aid to all people, regardless of their location.”

Last month, WHO reported delivering more than 100 tonnes of medicines and supplies for 1.2 million people in Taiz governorate, where over 3 million people, almost 400,000 of them internally displaced, are in dire need of humanitarian aid.

But it said distribution of an additional 22 tonnes of medical aid to five health facilities in Taiz City was on hold due to access issues.

UN Special Envoy for Yemen Ismail Ould Cheikh Ahmed has been trying to broker peace talks between the various factions to end the fighting that has torn the country apart over the past year, but he adjourned them last month until mid-January to allow for bi-lateral in-country and regional consultations to secure full adherence to a ceasefire. 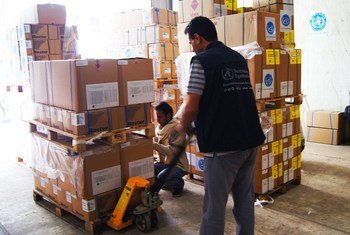 28 December 2015
The United Nations health agency has delivered more than 100 tonnes of medicines and supplies for 1.2 million people in strife-torn Yemen’s central Taiz governorate, where over 3 million people, almost 400,000 of them internally displaced, are in dire need of humanitarian aid.