UN Photo/Milton Grant
A hearing of the International Criminal Tribunal for Rwanda ICTR) in 1998.
31 December 2015

The United Nations tribunal set up 21 years ago to judge those guilty for the genocide in Rwanda of more than 800,000 people – overwhelmingly Tutsi, and also moderate Hutu, Twa and others – formally closed today after delivering 45 judgments as part of the Organization’s efforts to stamp out impunity for crimes against humanity.

The Security Council, which set up the International Criminal Tribunal for Rwanda (ICTR) on 8 November 1994 – the first time in history that an international tribunal delivered verdicts against those guilty of committing genocide – marked its closure with a press statement reaffirming its “strong commitment to justice and the fight against impunity.”

During its two decades of work in Arusha, Tanzania, the ICTR sentenced 61 people to terms of up to life imprisonment for their roles in the massacres which took place over the course of three months of bloodletting by Hutu extremists. Fourteen accused were acquitted and 10 others referred to national courts.

The indicted included high-ranking military and government officials, politicians, businessmen, as well as religious, militia and media leaders, and the court noted that “during the 100 bloody days… unimaginable violence overtook the country... a rate of killing four times greater than at the height of the Nazi Holocaust.”

With its sister tribunals like the UN International Criminal Tribunal for the former Yugoslavia (ICTY), the ICTR played a pioneering role in setting up a credible international criminal justice system, producing a substantial body of jurisprudence on genocide, crimes against humanity, war crimes, and individual and superior responsibility.

Today’s press statement by the Council acknowledged “the substantial contribution of the ICTR to the process of national reconciliation and the restoration of peace and security, and to the fight against impunity and the development of international criminal justice, especially in relation to the crime of genocide.”

It stressed that the establishment of the International Residual Mechanism for Criminal Tribunals in 2010 is essential to ensure that the ICTR’s closure does not leave the door open to impunity for the remaining fugitives, and called on all States to cooperate with the Mechanism and the Rwandan Government to arrest and prosecute the eight remaining ICTR-indicted fugitives.

During its two decades, the ICTR held 5,800 days of proceedings, indicted 93 people, issued 55 first-instance and 45 appeal judgements, and heard the “powerful accounts of more than 3,000 witnesses who bravely recounted some of the most traumatic events imaginable during ICTR trials,” ICTR President Judge Vagn Joensen told the Council earlier this month.

It became the first international tribunal to issue a judgement against a Head of Government since the Nuremburg and Tokyo Tribunals just after the Second World War, when it condemned former Interim Government Prime Minister Jean Kambanda to life imprisonment in 1998. 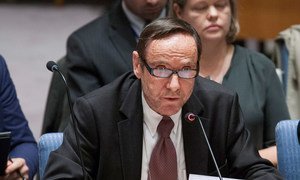 Adopting a new resolution today, the Security Council welcomed the completion of judicial work of the United Nations tribunal set up in the wake of the 1994 genocide in Rwanda, following delivery of the court’s last judgment on 14 December and its impending closure, set for 31 December 2015.