Syria: senior UN official calls for immediate end to use of sexual violence by all sides as weapon of war

Welcoming the Security Council's unanimous adoption of a blueprint for peace in Syria, a senior United Nations official has called on all sides to immediately stop using sexual violence as a tactic in the fighting tearing the country apart.

“A political solution is the only way to bring an end to the horrific human rights violations taking place in Syria, including the systematic use of sexual violence,” Secretary-General Ban Ki-moon's Special Representative on Sexual Violence in Conflict, Zainab Hawa Bangura, said in a statement.

“Even as hope springs for peace, I reiterate my calls to all parties to the conflict in Syria to immediately refrain from the use of sexual violence which has been used as a tactic of war, a tactic of terrorism, and an instrument of torture.”

Ms. Bangura issued the statement last night shortly after the Council gave the UN an enhanced role in shepherding the opposing sides to talks for a political transition early next month, with a timetable for a ceasefire, a new constitution and elections, all under UN auspices.

Declaring it crucial for the UN and other actors such as the International Committee for the Red Cross to have regular access to detention centres run by the Syrian military and intelligence services where many women suffered sexual violence and torture, she called on President Bashar al-Assad and those services to grant such access as a signal of commitment to the peace process.

She also voiced deep concern at the targeting of minorities for sexual violence, particularly by the Islamic State of Iraq and the Levant (ISIL) and other extremist groups.

“This includes religious and ethnic minorities, as well as the lesbian, gay, bisexual, transgender and intersex (LGBTI) individuals who have also been systematically persecuted, sexually tortured and killed,” she added.

“These violations are an affront to our collective humanity and must cease immediately. The perpetrators must be held to account.” 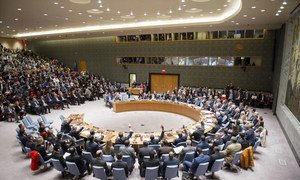 In its first resolution to focus on the politics of ending Syria’s five-year-long war, the Security Council today gave the United Nations an enhanced role in shepherding the opposing sides to talks for a political transition, with a timetable for a ceasefire, a new constitution and elections, all under UN auspices.