“Liberia’s human rights obligations must take precedence over any local practices considered to be 'cultural' or 'traditional' where such practices are incompatible with human rights principles,” UN High Commissioner for Human Rights Zeid Ra’ad Al Hussein said as his Office and the UN Mission in Liberia (UNMIL) released a report on the issue.

The study, based on in-depth interviews with victims, family members, community leaders, Government officials and civil society between January 2012 and September 2015, shows that violations disproportionately affect women, children, elderly people, the destitute and those with disabilities, with criminal offenses going unpunished due to their perceived cultural dimensions.

Some 58 per cent of Liberian women and girls have undergone female genital mutilation (FGM) – generally without anaesthesia – a practice widely used by a secret society called Sande and affecting poor households twice as much as wealthy ones.

“In addition to the extreme pain…the lack of medically sterilized equipment and facilities increases the likelihood of infection and lasting physical damage, and may even lead to death,” the report stressed.

It also documents abductions, forced initiations, torture and rape by members of another secret society called Poro. Non-members considered to have transgressed its rules, for instance by 'trespassing' on its sacred ground or remaining outdoors during Poro activities, have also at times been forcefully initiated, tortured and, in two documented cases, gang-raped.

“Accusations of witchcraft are common in Liberia, and often have devastating consequences for the accused, who may be subjected to trial by ordeal, 'cleansing' or 'exorcism' rituals, expulsion, ostracization, and even death,” the study reported, also citing many cases of trial by ordeal that amounted to physical and psychological torture, and in some cases even led to death.

“The authorities often hesitate to investigate or prosecute cases involving trial by ordeal, due to the perceived cultural dimensions of the practice,” it noted. “This has generated widespread culture of impunity among traditional actors.”

The report documents nine cases of suspected ritualistic killings, including three last August and September, in one of which a motorcycle driver in Ganta was killed, allegedly for ritualistic purposes. This sparked riots during which a man accused of this alleged ritual murder was killed by an angry mob.

“These events illustrate the lack of faith many Liberians have in the capacity and willingness of local authorities to take action in cases of ritualistic killing, and of the formal justice system to hold perpetrators accountable,” it said. “This situation raises serious concerns in view of the 2017 national elections when the number of ritualistic killings is likely to increase.”

Mr. Zeid called on State authorities to act to prevent these violations, ensure the prosecution of alleged perpetrators, and provide victims with all necessary medical and psychosocial support and access to redress.

“While the report takes note of the progress made by the Government in combatting such practices, the recent incident in Ganta shows the urgent need to strengthen the formal justice system,” UNMIL chief Farid Zarif said.

“If Liberia wants to make a good and positive use of its rich and abundant culture and traditions, it has to align some of these practices with its international human rights obligations,” he underscored. 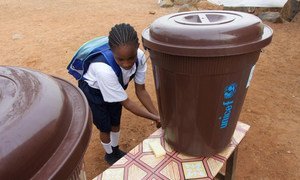 Following the flare-up of Ebola in Liberia 77 days after the outbreak was declared over, the region's top coordinator of the United Nations response to the epidemic said the three West African countries most affected by the deadly disease cannot recover from its ravages on their own.