As the harsh winter approaches Jordan, the United Nations Children’s Fund (UNICEF) and the UN World Food Programme (WFP) launched the winter cash assistance programme again, that will allow vulnerable Syrian families in Za'atari and Azraq camps to buy warm winter clothing for all their children.

“UNICEF’s top priority during the harsh winter months in Jordan is to ensure that vulnerable families are able to keep their children warm, healthy and active, and continue to attend schools and learning programmes,” said the UNICEF Representative, Robert Jenkins in a news release issued by WFP.

According to the news release, this is the second year that UNICEF and WFP partner to provide support to vulnerable Syrian children during the winter, which includes a one-time cash grant from UNICEF that will provide 20 Jordanian Dinars each to a total of 51,851 children under the age of 18 in the two camps.

The assistance will be delivered through electronic food vouchers (e-cards) provided by WFP to Syrian families to buy food every month and the money can be used to buy winter clothes, such as boots, gloves, trousers, coats and scarves at WFP-contracted supermarkets in the camps until mid-January 2016, said the news release.

The UN agencies said that families in the camps being informed through SMS, posters, flyers and awareness sessions with camp community leaders that the UNICEF cash assistance is for the winter needs of their children.

“Our partnership with WFP is highly significant, as it enables us to use their cost efficient e-cards to provide support to every child in the two camps this winter,” said Mr. Jenkins speaking about the UNICEF-WFP partnership.

“This collaboration demonstrates our solid commitment to the wellbeing of the children we support and brings to life WFP’s vision for stronger inter-agency partnership in Jordan,” said Mr. Yahia.

UNICEF said that it is reaching over 150,000 vulnerable children this winter in camps and host communities in Jordan with cash assistance and in-kind winter clothing in partnership with UNHCR, WFP and NGO partners.

According to WFP, through its e-card programme, the UN agency provides monthly food assistance to 523,000 vulnerable Syrian refugees in camps and communities in Jordan.

The 2015-2016 winterization programme has been made possible through the generous support from the governments of Canada, European Commission's Humanitarian aid and Civil Protection department (ECHO), Germany, Netherlands, United Kingdom and the United States, according to the news release. 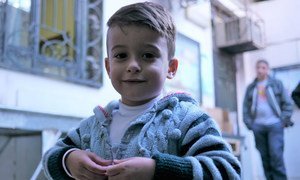 Warning of harsh winter conditions looming for more than eight million Syrian children living inside the war-ravaged country or as refugees around the region and beyond, the United Nations Children’s Fund (UNICEF) announced a package of assistance for 2.6 million Syrian children, including cash assistance, in addition to ongoing humanitarian programmes.