Released on the eve of Action Day at the UN climate change conference (COP21), the academic report also finds that 15 of the world's 20 largest banks, totaling close to $2 trillion dollars in market value, have made commitments to act and green bonds worth close to $50 billion are financing climate projects.

“The many thousands of governors, mayors, companies and investors who have so publicly committed to climate action are telling governments that our job in Paris is a climate change agreement that opens every possible door to help them push further and faster ahead,” said Laurent Fabius, the French Foreign Minister and President of COP21, at a press conference.

According to a press release issued by the UN Framework Convention on Climate Change (UNFCCC) – the organizer of the conference – the findings are “impressive” but actually understate the scale of total global climate action because they are based on data from only two platforms supported by the United Nations, France and Peru, where national, regional and civic governments and business publicly enter their commitments to take action on climate change.

“It is evident that this wonderful set of recorded climate actions is only a part of much wider, broader action towards a sustainable future. I know there are many tens of thousands of other climate initiatives out there and I welcome all who can to put their efforts, pledges and commitments on the record with us,” Mr. Fabius added.

Yale analyzed over 10,000 climate commitments made by cities, regions, businesses and investors, many involving the cooperation of national governments, who formally recorded their pledges in the Non-State Actor Zone for Climate Action (NAZCA) and under the banner of the Lima to Paris Action Agenda (LPAA).

Since the opening of COP21 on Monday, leaders of dozens of LPAA cooperative initiatives announced new commitments and many new cooperative initiatives are being launched. At tomorrow's Action Day, government leaders, including French President François Hollande, CEOs and film makers are expected to speak to this “exceptional global response” to climate change and underline the need to press ahead as quickly as possible.

According to UNFCCC, the growing wave of worldwide action by civic actors to reduce emissions and make societies and economies resilient to climate change was matched ahead of the Paris conference by an “unprecedented response” from governments. So far, 185 developed and developing countries, together representing a footprint of almost 95 per cent of global greenhouse gases, have submitted national climate action plans as their contribution to the new agreement.

“Government policies and actions alongside an ever growing number of companies, investors, cities, regions and provinces are aligning as never before. Collectively they do not yet keep us below a 2 degree Celsius temperature rise,” said UNFCCC Executive Secretary Christiana Figueres.

“But they keep that objective well within the affordable reach of humanity and they underwrite the truth that the clean energy transformation is already irreversible. Paris must trigger the next essential impetus towards that objective in terms of pace and scale,” she added.

Action Day will kick-off tomorrow morning with a message from the International Space Station. 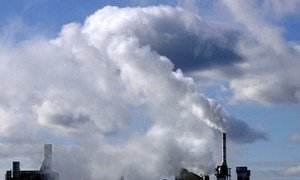