UNICEF/NYHQ2015-0557/Irwin
A girl washes her hands at the Slipway primary school in central Monrovia, the capital of Liberia. March 2015
27 November 2015

Following the flare-up of Ebola in Liberia 77 days after the outbreak was declared over, the region's top coordinator of the United Nations response to the epidemic said the three West African countries most affected by the deadly disease cannot recover from its ravages on their own.

“The response to Ebola – the national leadership, community engagement, so many people working so hard for such a long period of time with such dedication – if that can be translated into efforts beyond Ebola, then actually all there countries have a bright future ahead of them,” Peter Graaff, the UN Regional Inter-Agency Coordinator on Ebola, told the UN News Centre.

“But they cannot do it alone,” Mr. Graaff said of efforts to end transmission of the virus that has killed more than 11,000 people in Guinea, Liberia and Sierra Leone.

The interview comes just days after the World Health Organization (WHO) said that a cluster of three confirmed cases of Ebola were reported last week in Liberia, which had been declared free disease transmission on 3 September.

Stressing that the regional epidemic is not over, Mr. Graaff said that the “first reported case in 77 days shows that even when you are able to break the chain of transmission, there is a chance of the disease coming back,” which he noted is “largely due to a persistence of the virus in survivors.”

The recent cases in Liberia underscore the importance of robust surveillance measures to ensure the rapid detection of any reintroduction or re-emergence of the disease in unaffected areas, he said.

Guinea, Liberia, and Sierra Leone have each put surveillance systems in place to enable health workers and members of the public to report any case of illness or death that they suspect may be related to Ebola to the relevant authorities, according to WHO.

Going forward, the UN coordinator drew attention to the need to make sure that the most-affected countries stay at zero, that survivors can live up to their full potential in society as soon as possible, and ensure that investments take place and are directed not only to the health care sector of the three West African countries but also in other sectors, like education and infrastructure.

Earlier this month, the UN Special Envoy on Ebola, Dr. David Nabarro, underscored that his top priority is to make sure the more than 15,000 survivors and their families across West Africa have access to the support they need.

Saying “they have a tough time” because “they're distressed” and “not trusted,” as well as being “a subject of a lot of stigma,” Dr. Nabarro emphasized that he wants to be sure that every person who survived Ebola can access a comprehensive package of care that helps them, and that help their communities. 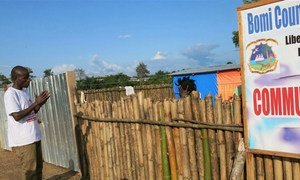 Ensuring 15,000 survivors have support they need is ‘my priority number one’ – UN envoy on Ebola

Transmission of Ebola has been stopped in Liberia and Sierra Leone, while Guinea is now treating a baby believed to be its last case, the United Nations Special Envoy on Ebola, Dr. David Nabarro, reported today, underscoring that his top priority is to make sure the thousands of survivors and their families across West Africa have access to the support they need.