“The recent waves of displacement have created new needs for protection, emergency shelter, health care, psychosocial support as well as water and sanitation,” UN High Commissioner for Refugees (UNHCR) spokesperson Leo Dobbs told a news briefing in Geneva, citing cases of torture, rape and the burning of villages at a time when humanitarian aid is massively under-funded.

The new violence comes after nine months of relative calm that had seen IDPs begin returning home, following more than two years of fighting between the mainly Muslim Séléka group and the mainly Christian anti-Balaka movement.

“The intra-communal fighting, starting in September and flaring up again in late October and November, left scores of people dead, hundreds of homes destroyed and more than 70,000 people displaced,” Mr. Dobbs said.

“Although the situation in Bangui (the capital) is currently calm but tense, we are concerned at the outbursts of violence in the country, which set back fragile efforts to restore a lasting peace and put planned elections in late December at risk.”

Hundreds of people have also fled to Democratic Republic of the Congo (DRC). At least 13 people died, including a UN peace-keeper, and hundreds were injured this month in the latest clashes in Bangui, Bambari and Batangafo, including attacks on IDP sites.

Some 800 IDP shelters and 120 houses were destroyed in Bangui. Those fleeing their homes have mostly hidden in the bush, fled to other sites or moved to UN peace-keeping bases or compounds run by international humanitarian organizations.

Of the $241 million in funding sought for projects in CAR and host countries only $48.8 million, just 20 per cent, have been received. “These gaps mean the support needed by hundreds of thousands of vulnerable people is not able to reach them,” he stressed

At the same time, humanitarian organizations have been increasingly targeted since September, with their offices and warehouses looted and staff attacked. 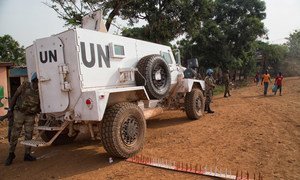 The Security Council today strongly condemned the attack against a checkpoint of the United Nations Multidimensional Integrated Stabilization Mission in the Central African Republic (MINUSCA), which followed an outbreak of violence in a camp for internally displace people in the town of Batangafo, during which one peacekeeper from Cameroon was killed.