UNHCR/B. Szandelszky
A group of internally displaced Iraqi girls queue for food at a community kitchen in a village in Iraqi Kurdistan's Dohuk governorate.
27 November 2015

A recent assessment conducted by the United Nations World Food Programme (WFP), Food and Agricultural Organization (FAO) and REACH initiative found that the humanitarian situation of Iraqis displaced in the Kurdistan region of Iraq is worsening due to limited access to jobs and economic opportunities, forcing many to resort to negative coping mechanism to meet their basic food needs.

“Most displaced families have already been forced to move multiple times within Kurdistan and the increase in population is putting strain on Kurdistan's already limited resources and host communities,” said Jane Pearce, Representative and Country Director of WFP in Iraq in a news release issued by the UN Office for the Coordination of Humanitarian Affairs (OCHA).

She added that the conflict has already forced most people to be uprooted several times and are now struggling to find work to feed themselves or their families.

OCHA said that over three million people have been displaced throughout Iraq, including an estimated one million within Kurdistan and the neighbouring areas of Ninewa and Diyala governorates, due to the Iraqi crisis, which is now well into its second year.

“Where farmers have had their equipment and harvests destroyed, crop production has plummeted and markets are ruined. Price fluctuations, reduced water supply and insecurity have devastated overall food production across the country and put more strains on the 2.4 million food-insecure Iraqis.” said Dr. Fadel ElZubi, FAO Representatives in Iraq.

According to the rapid assessment, which surveyed internally displaced Iraqis living in and out of camps as well as local communities, high unemployment rates have driven displaced families to increasingly rely on negative coping mechanisms such as skipping meals, eating smaller portions and spending their savings, in order to meet their basic food needs.

The assessment warned that due to high unemployment rates and many IDP families, especially in camps facing severe shortage of funding, additional shocks could have an impact on their ability to afford enough food.

Alternatively, amid increased displacements and a severe lack of funding, WFP has been forced to reduce food rations by up to 50 per cent, resulting in many families, who previously had sufficient access to food, now facing the risk of food insecurity.

Lastly, OCHA warned that continued conflict, reductions in WFP food assistance and disruptions to the Public Distribution System, a Government-run social protection programme that provides food to all Iraqis, could push more people to cope by selling assets, eating fewer meals and eating less nutritious food, which would in turn cause levels of nutrition to fall further as winter sets in. 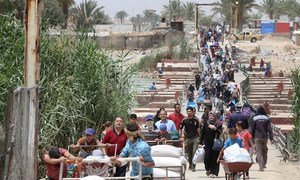 In Iraq, UN reports close to 2,000 casualties in October from terrorism and conflict

Acts of terrorism, violence and armed conflict killed a total of 714 Iraqis and injured another 1,269 during the month of October, according to casualty figures released today by the United Nations Assistance Mission in Iraq (UNAMI).