UNICEF/UNI202947/van der Velden
Nafissa, of Niger is 17. This photo was taken on 18 November 2015. She was married when she was 16. She has been married for 10 months, becoming pregnant 3 months after marrying. Nafissa's baby was still born 15 days ago.

26 November 2015
Nearly half of the world's child brides in 2050 will be African, if current trends persist, due to the continent's rapid population growth and lagging social reforms, the United Nations Children's Fund (UNICEF) has warned, calling for sharper focus on reaching the poorest and most marginalized girls with quality education and a host of other protective services.

A UNICEF report released yesterday at the African Union Girls Summit in Lusaka, Zambia, shows that the total number of child brides in Africa will more than double, rising from 125 million to 310 million over the next 35 years, largely because of slow rates of reduction, combined with rapid population growth.

The statistical report, A Profile of Child Marriage in Africa, reveals that In all other regions of the world, current rates of reduction and demographic trends mean there will be fewer child brides each year. By 2050 Africa will surpass South Asia as the region with the highest number of women aged 20 to 24 who were married as children.

“The sheer number of girls affected – and what this means in terms of lost childhoods and shattered futures ¬¬– underline the urgency of banning the practice of child marriage once and for all," said UNICEF Executive Director Anthony Lake in a news release on the launch of the report.

“In all other regions of the world, current rates of reduction and demographic trends mean there will be fewer child brides each year,” UNICEF expressed in the press release.

In all other regions of the world, current rates of reduction and demographic trends mean there will be fewer child brides each year. By 2050 Africa will surpass South Asia as the region with the highest number of women aged 20 to 24 who were married as children, according to the report.

“Child marriage generates norms that have become increasingly difficult to exterminate – norms that undermine the value of our women,” said Chairperson of the African Union Commission Nkosozana Dlamini Zuma. “Through greater awareness, teamed with a collaborative approach, the crippling effects of child marriage can be eradicated.”

The report notes that across Africa, the percentage of young women who were married as children has dropped from 44 per cent in 1990 to 34 per cent today. However, because Africa's total population of girls is expected to rise from 275 million today to 465 million by 2050.

UNICEF points out that far more ambitious action is needed – as even a doubling of the current rate of reduction in child marriages would still mean an increase in the number of child brides.

The report points out that progress has also been deeply inequitable: the likelihood that a girl from the poorest quintile would be married as a child is as strong today as it was 25 years ago.

"The data is also clear that ending child marriage requires a much sharper focus on reaching the poorest and most marginalized girls – those in greatest need and at greatest risk – with quality education and a host of other protective services. Their lives, and the futures of their communities, are at stake,” said Mr. Lake.

UNICEF's report also states that when children get married, their prospects for a healthy, successful life decline drastically, often setting off an intergenerational cycle of poverty. Child brides are less likely to finish school, more likely to be victims of violence and become infected with HIV.

Children born to teenage mothers have a higher risk of being stillborn, dying soon after birth and having low birth weight. Moreover, UNICEF says that child brides often lack the skills needed for employment.

The African Union launched a continent-wide campaign to End Child Marriage last May. This was followed with an action plan for governments to reduce child marriage rates by increasing girls' access to birth registration, quality education and reproductive health services, as well as strengthening and enforcing laws and policies that protect girls' rights and prohibit marriage before 18, according to UNICEF.

“Each child bride is an individual tragedy. An increase in their number is intolerable,” concluded the UNICEF chief. 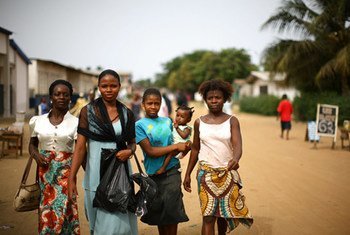 5 November 2014
For the first time, two United Nations human rights committees have joined forces to issue a comprehensive interpretation of the obligations of States to prevent and eliminate harmful practices inflicted on women and girls, such as female genital mutilation, crimes committed in the name of so-called honour, forced and child marriage, and polygamy.