Without international aid to improve education and jobs, the Sahel region of sub-Saharan Africa will become fertile ground for recruiting terrorists among its tens of millions of disadvantaged people, the top United Nations official for the region warned the Security Council today.

“It is an important opportunity to highlight the predicament of a region which desperately needs the continued focus of the Security Council,” Secretary-General Ban Ki-moon’s Special Envoy for the Sahel, Hiroute Guebre Sellassie, said, citing recent terrorist attacks from Bamako, Cameroon, Nigeria, Paris and Lebanon to the downing of a Russian plane over Egypt.

“It is very alarming that youth and women in the Sahel, who constitute a vast majority of the population, are the targets of recruitment into radical movements. Up to 41 million youth under 25 years of age in Burkina Faso, Chad, Mali, Mauritania and Niger alone face hopelessness and are at risk of radicalization or migration,” she added.

“If nothing is done to improve access to education, increase employment and integration opportunities for the youth, the Sahel, I am afraid, will become a hub of mass migration, and of recruitment and training of terrorist groups and individuals, which, as you know, will ultimately have grave consequences for global peace and security.”

She noted that only 56 per cent of Sahel children have access to primary education, and only 36 per cent of the population can read and write. “This unsustainable vicious cycle can only worsen without a strong international assistance,” she stressed.

Drug traffickers are increasingly colluding with armed groups and terrorist movements which grant them safe passage in exchange for financial benefits. “If conflicts are to be prevented in the Sahel, illicit trafficking, including of drugs, weapons and humans should be stopped,” she said.

She cited governance problems, noting that important segments of the populations are denied meaningful political participation, while communities’ resilience is falling victim to extreme environmental degradation, repeated climate shocks, and demographic trends which together are pushing millions of people on the brink of humanitarian disaster.

On the positive side, Ms. Sellassie first said the Sahel has continued to receive the sustained attention of the international community, the countries themselves have taken greater leadership and ownership of initiatives addressing regional challenges, and UN entities have improved coordination and coherence in implementing an integrated strategy.

“I would urge the Security Council to fully use existing mechanisms and expand their mandates to better monitor, report on and prevent the trafficking of drugs in the Sahel region. This trade finances terror and instability, and must be choked if our efforts are to be successful,” she concluded.

“Finally, I encourage the international community to enhance its support to the United Nations and regional organizations in addressing cross cutting and trans-boundary issues. Together, we can prevent further deterioration of the situation in the Sahel.” 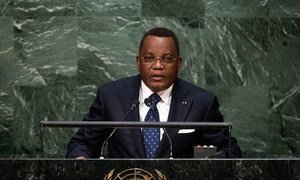 Addressing the United Nations General Assembly, Jean-Claude Gakosso, the Minister for Foreign Affairs of Congo, was among several African leaders who stressed the crucial links between peace and security and socio-economic development, and deplored ongoing acts of terrorism on the continent.