UN Women/Müslüm Bayburs
More than 100,000 people took part in the 2015 International Istanbul Marathon in Turkey on 15 November, with the slogan “Say No to Violence Against Women,” and the overall colour theme of the marathon was orange.
24 November 2015

From parades to soccer matches, school debates, and the lighting up of hundreds of iconic monuments, starting tomorrow a United Nations call to “Orange the World” will galvanize global action calling for an end to violence against women and girls, which according to the UN’s agency for gender equality (UN Women) affects one in three worldwide.

“Violence against women and girls remains one of the most serious – and the most tolerated – human rights violations,” said UN Under- Secretary-General and UN Women Executive Director Phumzile Mlambo-Ngcuka, in a press release.

“It is both a cause and a consequence of gender inequality and discrimination. Its continued presence is one of the clearest markers of societies out of balance and we are determined to change that,” she continued.

The call to action is part of the UN Secretary-General’s UNiTE to End Violence against Women campaign, led by UN Women. The colour orange, which has come to symbolize a bright and optimistic future free from violence against women and girls, will help unify the large-scale social mobilization.

It will be carried out during the civil society-driven 16 Days of Activism against Gender-Based Violence, which run from 25 November, the International Day for the Elimination of Violence against Women, until 10 December, Human Rights Day.

UN Women announced that coinciding with the 16 days of Activism, Ms. Mlambo-Ngcuka will undertake visits to three continents highlighting the urgent need for efforts to address the pandemic of violence at all levels – from global to the local – as well as across all sections of society, during high-profile events in Brazil, the Democratic Republic of Congo, Spain and Turkey.

“The focus must now be on prevention, and although there is no single solution to such a complex problem, there is growing evidence of the range of actions that can stop violence before it happens. This comprehensive approach forms the core of the new framework developed by UN Women and our partner agencies,” Ms. Mlambo-Ngcuka explained.

According to UN Women, there has been some progress over the last few decades; today 125 countries have laws against sexual harassment and 119 against domestic violence, but only 52 countries on marital rape.

The agency warned that despite efforts, violence against women and girls continues in every country, with women being beaten in their homes, harassed on the streets and bullied on the Internet. UN Women stressed that preventing and ending violence means tackling its root cause, gender inequality.

To this end, the recently adopted Sustainable Development Goals (SDGs) include a goal dedicated to gender equality—Goal 5—which aims to end all forms of discrimination against women and girls. It recognizes violence against women as an obstacle to fully achieving the 2030 Agenda for Sustainable Development and provides comprehensive indicators on what should be done to address that goal. 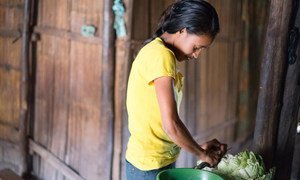 On International Day, UN focuses on adolescent girls as part of 'relentless' drive towards equality for all by 2030

The newly adopted Sustainable Development Goals (SDGs) offer an opportunity for a global commitment to breaking intergenerational transmission of poverty, violence, exclusion and discrimination – and realizing our vision of a life of dignity for all, United Nations Secretary General Ban Ki-moon declared, marking the International Day of the Girl Child.