UNHCR/A. McConnell
A group of Afghans arrive on the island of Lesbos after travelling in an inflatable raft from Turkey to Greece. Hundreds of thousands of refugees and migrants used the dangerous sea route across the Mediterranean in 2015.
20 November 2015

As last week’s terrorist attacks in Paris and Beirut continue to reverberate round the world with calls to restrict refugee and migrant movement in the name of security, United Nations Secretary-General Ban Ki-moon today warned against “misplaced suspicions” about refugees and migrants, especially Muslims, who can help fight violent extremism.

“We must be on guard against such distortions and discrimination, which only play into the hands of terrorists trying to sow divisions and fear,” he told a previously scheduled UN General Assembly meeting devoted principally to Syrian asylum-seekers, in which he set out a roadmap to address the root causes and increase funding to manage the flow of refugees and migrants in general.

“We must respond not by closing doors but by opening our hearts with unity, tolerance, and pluralism and compassion,” he said.

“This will foster true security. We cannot cede any ground – legal or moral– in countering violent extremists. The rights to asylum and non-refoulement must be upheld” he said, adding that: ‘In the wake of terrorist attacks, I am deeply concerned about misplaced suspicions about migrants and refugees, especially those who are Muslim.”

Mr. Ban stressed that fears about terrorists hiding among refugees only support the argument for a managed approach, in which he laid out five priority areas: addressing root causes; managing large flows; protecting human rights; increasing financing; and adopting a global approach.

“Millions of refugees who have lost everything to violence and oppression want to end those threats more than anyone,” he said. “They can potentially be a major constituency in combating violent extremism.

“So can the world’s youth. I must recall that almost half of the 60 million forcibly displaced (worldwide) are children. I repeat my call to empower today’s young peacebuilders.”

Mr. Ban called for a new deal to manage global mobility, built on equitable responsibility sharing, noting that while Jordan, Lebanon, Turkey and all first asylum States have generously supported millions of desperate people – a record 60 million driven from their homes worldwide - having such few countries bear the global burden is simply not sustainable.

More resources and political will are crucial prevention tools, as is addressing poor governance, growing inequalities and human rights violations, including the oppression of women, which are major factors driving people from their homes, he stressed.

In tackling large flows and processing their claims for protection and refugee status, criminal networks must be brought to justice. The demand for their services must be curbed by providing shorter and better-managed transits, and more safe and legal paths such as family reunification, student visas, humanitarian visas and private sponsorships, he added.

Noting that the immense needs vastly overwhelm resources, Mr. Ban urged Member States to finance all underfunded humanitarian appeals, but warned that such donations should not come at the expense of development aid, which remains essential.

Finally, he called for a global approach, citing UN cooperation with the African Union, the ASEAN grouping of South-East Asian countries, the European Union, and the Organization of Islamic Cooperation.

“No country alone can solve the problem that is inherently international. We will find answers through a collective push that transcends narrow, short-term interests,” he said. “With the right global arrangements, we can make the most of regional resources. The road ahead is full of challenges, but we have a map to navigate them.”

Refugees have to be dealt with as human beings, stresses senior UN official 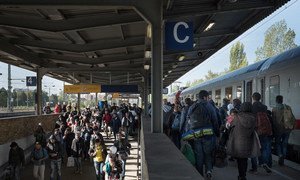 Paris, Beirut terror attacks must not be pretext for slamming shut doors to refugees – UN officials

The United Nations General Assembly met today on tackling the global refugee crisis in the shadow of last week’s terrorist attacks in Paris and Beirut, with top officials pleading that the door for genuine refuge not be slammed shut in the name of security.