UNICEF/NYHQ2015-2191/Georgiev
A young child eats a sandwich next to the tarpaulin that serves as a makeshift shelter, close to the town of Gevgelija, Former Yugoslav Republic of Macedonia, on the border with Greece (September 2015).
16 November 2015

With record numbers of child refugees and migrants – 700 a day seeking asylum in Europe –the United Nations Children's Fund (UNICEF) said it has identified five groups of vulnerable children and is mobilizing tailored actions to meet their needs.

“These young people are determined to make a better life for themselves, but their futures hang in the balance as they make their way through Europe. We cannot let them down,” said Marie-Pierre Poirier, UNICEF Special Coordinator for the Refugee and Migrant Crisis in Europe, in a news release.

“The big question for us is: Are we ready for this, is Europe fit for purpose; will we be able to give these children the future that they are risking their lives for?” she asked.

According to UNICEF, the numbers of children and women have steadily increased in the past several months, with no end in sight as winter approaches. The agency stressed that not only is the total number of children seeking asylum in the European Union unprecedented in recent history – 214,000 in total from January to September this year according to the latest data from Eurostat – but so, too, is the number of children on the move.

In Sweden alone, UNICEF reported that the total number of unaccompanied children claiming asylum is more than the total of last year for all of Europe, with 24,000 unaccompanied minors having claimed asylum there.

Meanwhile, actions are already being carried out by government authorities, UNICEF, the UN refugee agency, the Red Cross, humanitarian protection workers and national social workers, but UNICEF says this needs to be stepped up urgently.

“When countries progress and become EU members with a strong GDP [gross domestic product], there is a notion that they no longer need help, but the refugee and migrant crisis is changing Europe and it is changing the way we operate,” Ms. Poirier. “Refugees and migrants, all children need protection. UNICEF is ready to step up its partnership with governments at their request as we adapt to this fast moving and unpredictable crisis.” 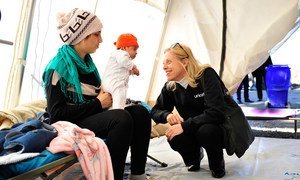 UNICEF official experiences ‘humanity on the move,’ following refugees and migrants through Europe

As the number of women and children on the move in Europe continues to increase, an official from the United Nations Children’s Fund (UNICEF) today shared her eyewitness experience travelling with refugees and migrants for eight days along a difficult route from Greece to Slovenia, passing through the Former Yugoslav Republic of Macedonia, Serbia and Croatia.