Secretary-General Ban Ki-moon and the United Nations Security Council have condemned the “despicable" terrorist attacks carried out today in various locations in and around Paris, and Mr. Ban has demanded the immediate release of the numerous individuals reportedly being held hostage in the Bataclan theatre.

In a statement issued by his spokesperson, the Secretary-General condemned the "despicable" multiple attacks that took place in the French capital.

Though the situation remains fluid, media reports have suggested that a national state of emergency has been called in the wake of multiple shootings throughout Paris, including at the Bataclan arts centre in the 11th arrondissement, which appears to be one of four venues attacked and where dozens of people are reportedly being held hostage.

“The Secretary-General trusts that the French authorities will do all in their power to bring the perpetrators to justice quickly,” said the statement.

Extending his deepest condolences to the families of the victims and wishing a speedy recovery to those injured, Mr. Ban said in his statement that he stands with the Government and people of France.

In a separate statement, the UN Security Council also strongly condemned what the 15-member body referred to as “barbaric and cowardly” terrorist attacks, causing numerous deaths and injuries among civilians.

The Council underlined the need to bring the perpetrators of these terrorist acts to justice.

The members of the Council also expressed their deep sympathy and condolences to the families of the victims, as well as to the Government of France, the statement concluded.

Also speaking out strongly, the President of the UN General Assembly, Mogens Lykketoft, said the whole world is outraged by the attacks and will stand in solidarity with the French Government and the People of France.

Speaking on behalf of the United Nations General Assembly, Mr. Lykketoft said terrorism and murder of this kind is an outrage to humanity. “We must all stand together to fight this outrageous brutality. It will not succeed and it has no place in the modern world.”

Echoing those sentiments and equally strong condemnation, Oh Joon, President of the UN Economic and Social Council also expressed shock and sadness at the attacks and expressed deepest condolences on his behalf and that of ECOSOC. “Our solidarity with the French people and government in this difficult time,” he added.

The High-Representative of the UN Alliance of Civilizations, Nassir Abdulaziz Al-Nasser, strongly condemned the “outrageous” terrorist attacks, saying such heinous attacks are a threat to peace and security, as they will lead to more violence.

Extending his heartfelt condolences to victims' families and to the Government and people of France, he said his thoughts and prayers and that of the UN Alliance of Civilizations are with the French people. 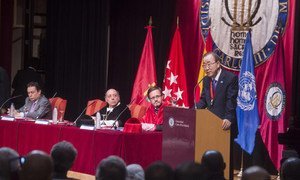 Despite the world’s best efforts, “terrorism is on the march” and the violent ideas that fuel it are spreading, United Nations Secretary-General Ban Ki-moon warned today, telling delegations gathered for a global dialogue in Madrid that a unified, multi-dimensional and rights-based response is required to wipe out the scourge.