At a special meeting of the United Nations Human Rights Council, the UN High Commissioner for Human Rights stressed the need to promote and protect human rights in Venezuela and to defend even those who disagree with the State’s policies, while Venezuelan President Nicolás Maduro Moros vowed to continue employing truth to defend his country against “audacious accusations” and “imperialist attacks.”

The Council convened the special session to hear from President Maduro about the human rights situation Venezuela, which was just recently re-elected to serve on the 47-member body.

“Membership of the Council comes with the responsibility to promote and protect human rights in one’s own country, but also on the global stage. It is my sincere hope that Venezuela will strive to make concrete progress on both fronts,” said High Commissioner Zeid Ra’ad Al Hussein in his address to the meeting.

Mr. Zeid commended Venezuela’s continued cooperation with human rights bodies and welcomed its participation in the Council’s Universal Periodic Review (UPR) and in its review this year by both the UN Human Rights Committee and the Committee on Economic, Social and Cultural Rights.

“My Office, in particular our Regional Office for South America, is ready to provide technical assistance in the implementation of the recommendations made by the Committees and in Venezuela’s UPR, as well as on the National Human Rights Action Plan. I also urge Venezuela to ratify again the Inter-American Convention on Human Rights,” he noted.

At the same time, Mr. Zeid stressed that a number of human rights mechanisms, including the Working Group on Arbitrary Detention, as well as his own Office (OHCHR), have raised serious concerns about the independence of the judiciary in Venezuela, the impartiality of judges and prosecutors and the pressures they face in handling politically sensitive cases, specifying the cases of Judge María Lourdes Afiuni and Leopoldo Lopez.

“The Human Rights Committee also recently expressed concerns, which I share, about intimidation, threats and attacks against journalists, human rights defenders and lawyers,” added Mr. Zeid, urging Venezuela to comply with the recommendations of the international human rights bodies and to ensure that such individuals do not face undue pressure in carrying out their important work.

Further, he expressed concern at the implementation of a “broad” state of emergency in 24 municipalities that suspends a number of human rights protection, and urged the Government to promptly lift it.

Lastly, Mr. Zeid recalled that although the Committee on Economic, Social and Cultural Rights lauded Venezuela for the significant progress made in the reduction of malnutrition and poverty, it did note “a regressive tendency in the results of the fight against poverty” and urged the country to address this.

Following Mr. Zeid’s address, President Maduro said that while Venezuela had always participated in the work of UN bodies in a spirit of transparency, this was not the first time it had “suffered audacious accusations and imperialist attacks by civil servants, taken from the agenda of global harassment, and it would not be the first time that we strike down these lies with the truth.”

Thanking the UN for the support it provided Venezuela as it sought to build a new State of law and justice, he said, also thanking Member States for the “universal vote of confidence” that has seen his country re-elected to the Human Rights Council.

He said that while the Council itself had made strides since its creation, much work remained to be done to ensure the body achieved its goals of building a true dialogue among all humankind, “where there is no effort to impose one opinion on people [and where] each of our stories can be told.”

The people of the global South must be respected in their own identities, President Maduro, declared, citing Venezuela’s new Constitution which set forth concept of putting people at the centre of efforts and outlines social justice, environmental protection and labour rights, among others. At the same time, he acknowledged that the new society Venezuela is building is not without complex processes and has for decades suffered attacks from the “imperialist agenda of the United States.”

Venezuela also faced ongoing harassment through the “manipulation of human rights by the West, which uses it to try to isolate our country and…to protect those that are seeking to destroy the system of human rights and democracy that our country has built over the past 17 years,” he said, explain that at the upcoming UPR, Venezuela would present its efforts to fight against poverty, boost wages and provide decent jobs as a refutation of the imperialist harassment that was continually waged against it. The creation of a national human rights plan, he said, would be “in step” with the UPR and harmonious with the international human rights system. 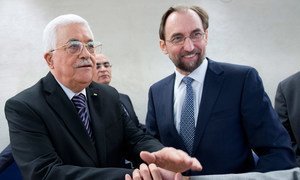 At a special meeting of the United Nations Human Rights Council today, the UN High Commissioner for Human Rights stressed that Israeli-Palestinian violence will draw “closer to a catastrophe” if not stopped immediately, while President Mahmoud Abbas called for creation of a “special protection” regime for the Palestinian people, amid roiling tensions in the region.