Following a killing and revenge attack on a camp for internally displace people in the Central African Republic (CAR) town of Batangafo, the Office of the UN High Commissioner for Refugees (UNHCR) today expressed concern about the spreading insecurity in the country and condemned the violent attack on the camp.

“We strongly condemn these horrific acts that have cost the lives of innocent people. We call on all actors to restore calm and respect the civilian and humanitarian character of IDP [internally displaced person] camps,” said Charles Mballa, UNHCR’s Deputy Representative to CAR.

According to preliminary reports from UNHCR, rebel fighters entered the camp yesterday to reportedly avenge the killing of two young Muslim men earlier that day in the same camp.

The agency added that the rebels fired shots and torched huts and community shelters, triggering panic and killing five people, including an elderly woman who was burnt to death in her shelter.

UNHCR said that about 5,500 people fled the camp and sought shelter in safer areas near a camp for UN peacekeepers and the compound of Médecins Sans Frontières as nearly 730 huts were destroyed in the attack along with a youth centre.

The agency also reported fresh violence and forced displacements erupting in other areas, including Bambari, where this morning armed men believed to be ex-Séléka killed two students.

UNHCR said that Bambari killings followed an attack last Friday on the village of Awatche, which forced some 900 people to flee to a UNHCR-run camp housing 1,850 Sudanese refugees in Pladama Ouaka.

“We all have a shared responsibility to protect civilians and preserve the neutrality and security of safe havens,” said Mr. Mballa.

The agency observed that any incident can trigger spiralling violence in the country and recalled that despite relative calm since January 2015, the capital Bangui has been severely affected by violence since September 26, when armed clashes left at least 90 people dead and forced more than 40,000 people to flee to safer areas following the killing of a Muslim taxi driver.

UNHCR estimates indicate that CAR had an internally displaced population approximately at 399,000 (as of mid-October), while almost 460,000 had fled to neighbouring countries. 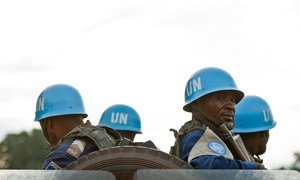 Secretary-General Ban Ki-moon has condemned the killing today of a peacekeeper from the United Nations mission in the Central African Republic (CAR) following a confrontation with armed elements in the town of Batangafo, amid ongoing violence in the strife-torn country where elections are set to take place before the end of the year.