FAO/Alessandra Benedetti
A citrus packing house in Morocco. One area of FAO’s work with the WTO is on food safety standards.
2 November 2015

“We look forward to ensuring fair trade of agricultural and food products through this stronger (FAO-WTO) cooperation,” FAO Director-General José Graziano da Silva said in remarks at an event at the agency’s headquarters in Rome.

“On the one hand trade is likely to play an increasing role in meeting the growing demand from food-deficit countries. On the other hand, greater trade openness may undermine the capacity of local people to produce their own food,” he added.

According to a press release issued by FAO, Mr. Graziano da Silva warned that failure to reach a balanced solution on issues relating to production and trade of agricultural products could derail the international community's recently agreed sustainable development goal to eradicate world hunger.

For his part, Director-General Roberto Azevêdo stressed that at the WTO, “we seek to ensure that the global trading system works for all, that it is fair and balanced,” in a way “which supports growth and development and allows people to access the goods and services that they need” including food.

“When I visit developing countries, especially in Africa...business people tell me about the difficulties they face in meeting the required standards,” he said, adding that it is essential to provide capacity building for producers in developing countries, an area of work where his Organization and FAO are seeking to deepen their collaboration.

Mr. Azevêdo referred to the 10th WTO Ministerial Conference in Nairobi scheduled for December, where the role of agriculture – especially in development and in improving the lives of people in least developed countries – will be high on the agenda.

Issues for discussion include addressing trade restrictions that impact imports, such as the lowering of tariffs, the need to minimize domestic agricultural subsidies, and the “distortions these programmes produce,” Mr. Azevêdo said, as well as the need to eliminate export subsidies.

The WTO Director-General expressed hope that some agreement would be reached in Nairobi on the issue of export subsidies. This, he said, would mark “an extremely significant breakthrough,” and would be especially important for developing and least developed countries.

Meanwhile, both leaders underscored the increase in cooperation between FAO and the WTO. This includes deepening their collaboration on trade and food safety, including a joint publication in 2016 which would deal with sanitary and phyto-sanitary (SPS) measures that curb the spread of plant and animal diseases during the transport for trade of agricultural products.

Other areas where the two bodies are seeking to reinforce their joint efforts include the Standards and Trade Development Facility; capacity development initiatives to assist countries in the implementation of the Codex Alimentarius or “Food Code” which develops harmonized international food standards that protect consumer health and promote fair practices in food trade; and country level assistance to facilitate trade in safe and nutritious food. 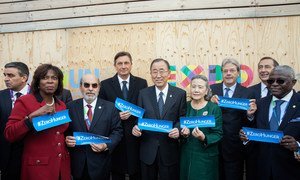 Celebrating World Food Day at the Milan Expo 2015, senior United Nations officials joined leading figures in the global fight against hunger in an appeal to the international community to speed up efforts on eradicating hunger and improving the way food is produced and consumed.