The number of tourists travelling the world during the first eight months of this year reached 810 million, a more than 4 per cent increase from the same period in 2014, thanks to “robust” travel to Europe, according to the United Nations World Tourism Barometer.

According to the barometer, which provides an overview of international tourism, Europe – the world’s most visited regional destination – recorded a robust 5 per cent increase in international tourist arrivals, the highest across all regions and “notable” for a rather mature region.

Asia and the Pacific, the Americas and the Middle East all enjoyed 4 per cent growth, while limited data available for Africa points to an estimated 5 per cent decrease, with North Africa decreasing by 10 per cent and Sub-Saharan Africa by 3 per cent.

“Although demand has been positive overall, tourism flows have been determined to some extent by the comparatively strong currency fluctuations,” said the Madrid-based UN World Tourism Organization (UNWTO), which produced the barometer.

“Meanwhile, expenditure from the Russian Federation and Brazil was significantly down, reflecting the economic constrains in both markets and the depreciation of the ruble and the real against virtually all other currencies,” according to the barometer.

Overall, international tourist arrivals grew by 4.3 per cent in the first eight months of 2015 and overnight visitors travelling the world between January and August 2015 reached 810 million, 33 million more than in the same period of 2014.

But Mr. Rifai warned against complacency, saying that while advancing fundamental issues such as travel facilitation and connectivity, “sustainability” needs to remain a core priority.

“As world leaders prepare to meet in Paris next December for the 21st Session of the Conference of Parties to the UN Framework Convention on Climate Change (COP21/CMP11) and following the approval of the 2030 Agenda for Sustainable Development by the UN General Assembly in September 2015, sustainability must be at the forefront of the tourism agenda,” he stated. 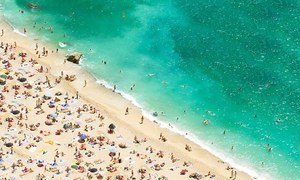 Marking the observance of World Tourism Day, senior United Nations officials are spotlighting the transformative potential of one billion tourists and their increasing capacity to help boost socio-economic and environmental development.