‘Endless cycle of suffering’ must stop, Ban says in Ramallah, urging end to wave of violence in region

On the second day of his visit to Israel and Palestine to ease the current tensions in the region, Secretary-General Ban Ki-moon called for an immediate end to violence, which “will only push back the day…both sides will live in peace and security,” and pledged the support of the United Nations to all efforts to create the conditions to make meaningful negotiations possible.

“I have been dismayed – as we all should be – by young people taking up weapons and seeking to kill. Violence is not the way,” declared Mr. Ban in Ramallah at a joint press conference with Palestinian President Mahmoud Abbas.

“Violence will not bring a just and lasting peace, but will only push back the day when Palestinians will achieve statehood and both sides will live in peace and security,” the Secretary-General continued, offered his condolences to the families suffering from the violence and welcomed and encouraged the efforts of President Abbas to lower tensions and end hostilities.

“I understand the frustration that comes after years of dashed hopes. But the only way to end the violence is through real and visible progress towards a political solution, including an end to the occupation and the establishment of a Palestinian state living in peace and security with Israel and its other neighbours,” the UN chief stressed.

He urged the international community to uphold its long-stated commitment to a comprehensive peace settlement but insisted that ultimately, “it is for Palestinians and Israelis to choose peace.”

“Our most urgent challenge is to stop the current wave of violence and avoid any further loss of life. I am deeply concerned by repeated provocations at the holy sites in Jerusalem, which have fuelled the current outbreak of violence. Addressing the existing tensions is critical to reversing the trend towards escalation,” he added.

Mr. Ban had informed that he emphasized to Prime Minister Netanyahu the urgent need to ease tensions and underscored today that the response of Israel to the situation added to the already difficult challenge of restoring calm.

However, Mr. Ban said that he welcomed the Israeli leaders’ repeated assurances that Israel has no intention of changing the historic status quo at the holy sites and stressed that perceptions can only change through actions on the ground.

Further, the UN chief also called for renewed attention of the situation in West Banka and stated that the Israeli settlement activity is “illegal and only inflames tensions.”

He stressed to both Israeli and Palestinian leaders to refrain from taking unilateral steps which “diminish the prospects for peace” and to work towards building “the foundations of a two-state solution.”

“We cannot ignore the sense of desperation that comes with the slow evaporation of hope. We must stop the endless, needless, mindless cycle of suffering, and begin the hard work necessary to restore the belief that genuine progress towards peace is possible,” Mr. Ban declared.

“A failure to do so will only embolden the advocates of violence and division. I urge Palestinians and Israelis alike to show courage and find their way back to a meaningful peace process. I welcome renewed international political action, including by the Quartet,” he said.

Lastly, stressing that “time is not on the side of peace” and that immediate action must be taken to “prevent any further worsening of the already unsustainable status quo,” the Secretary-General reiterated that the United Nations will continue to fully support all efforts to achieve a negotiated two-state solution. 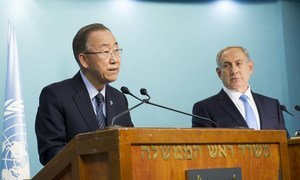 ‘We must turn back from this dangerous abyss,’ Ban says in Israel on first day of visit to crisis-torn region

In an effort to ease the current tensions between Israel and Palestine, United Nations Secretary-General Ban Ki-moon is heading to the region to meet with Israeli Prime Minister Netanyahu and Palestinian President Abbas, as well as with other senior officials.