<a href=http://bit.ly/1PvrtnC>Oren Ziv/IRIN</a>
A Palestine Red Crescent Society responder tends to the wounded during a Bethlehem skirmish. Clashes with the Israeli army in the West Bank have left many injured by rubber bullets and tear gas.
16 October 2015

Against a backdrop of escalating violence in the Middle East, Assistant Secretary-General for Political Affairs Tayé-Brook Zerihoun briefed an emergency session of the United Nations Security Council today, reporting on the latest violent incident in which a large group of Palestinians set fire to the compound containing the holy site of Joseph’s Tomb in the West Bank city of Nablus.

“Fortunately there were no reported injuries but the site sustained major damage,” said Mr. Zerihoun. “As with the many deadly incidents over these past weeks, the Secretary-General [Ban Ki-moon] strongly condemns this reprehensible act and calls on those responsible to be swiftly brought to justice.”

He said that the UN welcomes Palestinian President Mahmoud Abbas’ condemnation of the arson attack and his announcement that a committee has been established to conduct a full investigation into the crime.

Later in the day, Mr. Ban’s spokesperson issued a statement echoing Mr. Zerihoun’s message to the Council and “calling on all sides to respect the sanctity of all holy sites, refrain from any inflammatory actions or statements and reject the extremist elements that are pursuing a political agenda seeking to transform the current situation into a religious conflict.”

In his briefing to the Council, Mr. Zarihoun said the incident represents a particularly troubling development in light of its religious dimension. "We call on all sides to respect the sanctity of all holy sites and reject the extremist elements that are pursuing a political agenda seeking to transform the current situation from a national to a religious struggle,” he said, adding: If they are successful in their efforts it could have catastrophic consequence for Palestinians and Israelis alike, with serious reverberations in the region.”

The Assistant Secretary-General also noted that the incident followed a deadly week in the West Bank, including East Jerusalem, explaining that there were 11 reported attacks against Israelis and Israeli security forces leaving four Israelis and nine Palestinians dead and 16 Israelis and four Palestinians wounded.

“There were also three reported stabbing and ramming attacks on Israelis in Israel, leaving 10 Israelis injured and three Palestinian suspects wounded,” he added.

In Gaza, he said that a seventh Palestinian succumbed to his wounds on 10 October after clashing with the Israel Defence Forces (IDF) near the security barrier the previous day.

He went on to note that Israeli airstrikes on Hamas sites caused a building to collapse. The airstrikes were in response to rocket fire on Israel on southern Israel on 10 October.

In addition, Palestinian militants fired at least eight rockets toward Israel during the past week, with most falling short and landing within Gaza territory, and one being intercepted by Iron Dome.

“As of yesterday, a total of seven Israelis and 32 Palestinians – including those in conducted or allegedly conducted or attempted attacks – were killed, some 124 Israelis (including ISF personnel) and more than 1,118 Palestinians were reportedly injured since October 1st,” he said.

In the wake of these attacks, he said, Israel’s security cabinet has passed a broad range of new security measures which are already being implemented.

“The Israeli Defense Forces have significantly bolstered their presence in Israeli city centres, while many Arab neighbourhoods in East Jerusalem have been surrounded by security forces with access roads blocked and checkpoints established,” Mr. Zerihoun added, noting that the Israeli authorities had also reinstated a number of movement restrictions in the West Bank.”

He also spoke of the introduction of additional measures that have been introduced with the goal of deterring would be terrorists from carrying out attacks. Homes of those accused of carrying out terror attacks will be demolished within days of any attack and their families, if residents of East Jerusalem and not Israeli citizens, will have their permanent residency status revoked, he said.

“The United Nations has maintained a consistent position on these issues,” he continued. “Collective punishments, including house demolitions, are counter-productive and contravene international law. I we have urge Israel to immediately cease this damaging practice.”

“The persistence of the occupation and the diminishing prospects of achieving Palestinian aspirations for statehood have transformed long-simmering Palestinian anger into outright rage. This stark reality has been compounded by the increasingly dire economic circumstances, including the bleak prospects for youth employment.”

He said that the continued and expanding settlement activities further diminish the hope and the potential for creating a viable Palestinian state. “Such loss of political perspective is the single most damaging factor which contributes to the anger and frustration driving the violence we are seeing today.”

Against this backdrop, he said, there have been a number of factors that have led to the current situation, including tensions at the holy sites in Jerusalem, as well as “reckless statements made by Palestinian and Israeli extremist elements, reinforced by some mainstream voices as well.”

“Prime Minister Netanyahu's repeated assurances that Israel has no intention of changing the historic status quo at the holy sites,” he said, were welcome. “But perceptions will only change when concrete actions, based on the agreements between Israel and Jordan, follow these words.”

Mr. Zerihoun also said that another factor leading to heightened tensions was “the apparent heavy-handed approach by Israeli security services. Wide dissemination of video footage of several incidents fuelled more attacks and has raised serious questions as to the appropriate level of force used by the IDF [Israel Defence Service] and police. The Secretary-General has called for a thorough investigation of all such cases.”

“Finally, we have seen that the impact of social media and irresponsible rhetoric has played a dramatic role in escalation. On this count both sides have much to be blamed for, but I welcome efforts by leaders in the past days to tone down their statements. I call on community, religious and political leaders on all sides to calm the language they use in this regard and to work together to de-escalate the situation,” he concluded. 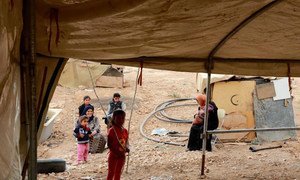 Deeply alarmed by the escalating violence and widespread loss of civilian life in the occupied Palestinian territory, including East Jerusalem and in Israel, the United Nations Relief and Works Agency for Palestine Refugees (UNRWA) today called for strong and immediate political action and accountability to stem the ongoing violence and prevent its further escalation.