UN Photo/Jean-Marc Ferré
Special Rapporteur on the right to freedom of peacful assembly and of association Maina Kiai.
15 October 2015

The United Nations Special Rapporteur on the rights to freedom of peaceful assembly and of association, Maina Kiai, today warned that a new bill amending the law on non-governmental organizations (NGOs) in Kazakhstan, may compromise the independence of associations and also challenge their existence.

“The possibility for a centralized Government’s operator to distribute all grants irrespective of sources, be it public or private funds, enables the authorities to arbitrarily limit resources and to control the entire not-for-profit sector,” Mr. Kiai cautioned.

“By controlling the sources of funds, the draft law would limit associations’ functional autonomy and put their independence and existence at serious risk,” he said.

The expert underscored that access to financial resources is a vital and integral part of the right to freedom of association.

Additionally, he recalled that similar appeals were made at the end of his visit to Kazakhstan earlier this year, including maintaining the independence of associations and inclusion of civil society groups in public debate.

He reiterated his call to the Kazakh authorities to repeal the draft law.

The amendments which were adopted by the Senate last week, will now be held at the Lower House of Parliament for its final consideration.

The draft law also bars associations from using more than 10 per cent of governmental grants for administrative expenditures.

The UN expert noted that other countries which adopted such measures have had a devastating impact on civil society organizations.

“Many were forced to stop their activities, leaving society deprived from these organizations’ essential contribution in the economic, cultural, political and social fields and devoid of important voices often representing the most marginalized,” he added.

Mr. Kiai stressed that existence of free civil societies are crucial for a country with significant democratic and development aspirations as they ‘ensure diverse voices are included in decision making process.’

♦ Receive daily updates directly in your inbox - Subscribe here to a topic.
♦ Download the UN News app for your iOS or Android devices.
kazakhstan 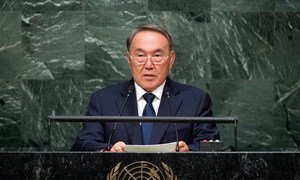 Stressing that there is no alternative to the United Nations as a universal organization, President Nursultan Nazarbayev of Kazakhstan today looked ahead 30 years to its 100th birthday in 2045 to propose far-reaching reforms, from creating a supranational currency to moving its Headquarters from New York to Asia.