<a href=http://www.irinnews.org/report/101754/somaliland-losing-youth-to-lure-of-europe>Adrian Leversby/IRIN</a>
A group of young men in Somaliland’s capital, Hargeisa, take a break from an informal football match. Youth unemployment in Somaliland is among the highest in the world at between 60 and 70 per cent.
8 October 2015

The rate has stabilized at 13 per cent following a period of rapid increase between 2007 and 2010, but it is still well above the pre-crisis level of 11.7 per cent, according to the ILO report Global Unemployment Trends for Youth 2015: Scaling up investments in decent jobs for youth. It also highlights a drop in the number of unemployed youth to 73.3 million in 2014, some 3.3 million less than the crisis peak of 76.6 million in 2009.

“It is encouraging to see an improvement in the youth employment trends compared to the GET [Global Employment Trends] for Youth 2013,” says Sara Elder, the report’s lead author.

“But we shouldn’t lose sight of the fact that recovery is not universal and that almost 43 per cent of the global youth labour force is still either unemployed or working yet living in poverty. It’s still not easy to be young and starting out in today’s labour market,” she added.

Because of a shrinking youth labour force, the youth unemployment rate remains high despite a decline in the number of unemployed youth, states the report, which notes that, according to projections, the rate is expected to increase slightly this year.

The report also notes the need to invest in skills and create decent work.

“We know that today’s youth do not face an easy labour market transition and with the continued global economic slowdown,” said Azita Berar Awad, Director of the ILO’s Employment Policy Department, adding “this is likely to continue, but we also know that greater investment in targeted action to boost youth employment pays off. It is time to scale up action in support of youth employment.”

“The 2030 Sustainable Development Agenda and its emphasis on youth employment in Goal 8, provides a new opportunity to mobilize broad global partnerships to support action on a more significant scale,” Ms. Berar Awad continued. “Increased investment is needed to alleviate the scars of the crisis on the present generation as well as to ensure more inclusive labour markets and societies.” 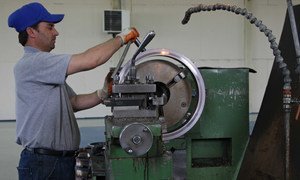 In advance of the Group of 20 (G20) meetings taking place this week in Ankara, Turkey, a United Nations-backed inter-agency report has warned that growth among the economies of those countries has slowed considerably over the last three years and unemployment rates remain unacceptably high.