There are currently no humanitarian agencies left in Kunduz, the north-eastern Afghan city where an air strike hit the Médecins sans Frontières (MSF) hospital, causing the deaths and injuries of medical personnel, patients and other civilians, the United Nations said today.

Anecdotal evidence points to one or few MSF staff still in the hospital, trying to provide health services to the population, but this has not been confirmed, UN Office for the Coordination of Humanitarian Affairs (OCHA) spokesman Jens Laerke told a briefing in Geneva.

“The big picture is that international aid agencies have been forced out of the city for the time being, so there is essentially no proper health and trauma care for those left there,” he said.

The MSF hospital had been the only facility of its kind in the entire north-eastern region, serving some 300,000 people in Kunduz alone. Fighting between armed groups and Government forces is ongoing, the airport is closed to civilian aircrafts and there is no road access into the city because of road side bombs, ambushes and road blocks, Mr. Laerke said.

An estimated 8,500 families have been displaced in the region by the fighting. Identifying and responding to the needs of these internally displaced people is now a high priority, but these are largely unquantified due to lack of access, although agencies do have available stock in the region and a small-scale response is being sporadically arranged where access allows, he added.

When a reporter said MSF was doing a job essentially under the UN umbrella, yet there was not really any UN support for their call for an independent investigation, adding that Secretary-General Ban Ki-moon has not said as much as he would were it a UN agency that was bombed, spokesmen strongly rebutted the charge.

Ahmad Fawzi, interim Director of the UN Information Service in Geneva, noted that it was Mr. Ban himself who had called over the weekend for a “thorough and impartial investigation into the attack in order to ensure accountability.”

Differentiating between UN staff and non-UN staff in the treatment of the issue is a false premise, he said, stressing that it was not accurate to say that, had it been UN staff instead of MSF, the Secretary-General would call for a UN or independent investigation.

Non-governmental organizations (NGOs) are included in emergency security procedures covering UN staff, meaning there was care for non-UN workers, humanitarian workers, in areas of conflict and an impartial investigation carries more weight in the eyes of outsiders who view the work of the UN in a critical and constructive manner, he declared.

A statement issued Saturday by the Office of the UN High Commissioner for Human Rights (OHCHR) noted that according to MSF, pro-Government forces had been informed of the precise location of the medical facilities.

While it has yet to be established whether or not the hospital or immediate surroundings were the target of the attack, or were recklessly endangered by it, airstrikes reportedly continued to hit the area for a further 30 minutes after pro-Government forces were informed they were endangering a medical facility. According to OHCHR, a United States spokesperson has reportedly been quoted saying US planes were carrying out airstrikes at around the time the hospital was hit. 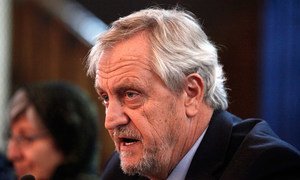 Nicholas Haysom, the United Nations Special Representative for Afghanistan, reiterated today the need for an impartial investigation into the deadly air strike on the Médecins sans Frontières (MSF) hospital in Kunduz, which resulted in the deaths and injuries of medical personnel, patients and other civilians this past Saturday.