With his homeland awash in the blood of its people, who were making a valiant stand against terrorism, Syria’s Foreign Minister criticized world leaders at the United Nations today for taking only half-hearted steps to end the crisis in his country and for providing haphazard support to Syria’s fight against extremism until the scourge began spreading to Europe.

“You have been witnessing countries spawning extremist ideology until it reached Europe…where it is now as evident as it has been in the Middle East. The sleeper cells are now waking up, as bombings and assassinations have [begun] to appear in the West,” declared Walid Al-Moualem, Deputy Prime Minister and Minister of Foreign Affairs and Expatriates of Syria.

“What is the guilt of the innocent people of your countries who [are starting] to pay the price of terrorism supported by some of your politicians?” he asked at the annual General Debate and emphasized the implications of this, stating that terrorism “recognizes no boundaries.”

Indeed, if the flow of terrorists to Syria and the Member States that support it is not stopped, “the fire that has broken out in Syria, Iraq and Libya will continue to spread.” Syria could not implement any democratic political measures as long as terrorism was striking at home and threatening innocent civilians.

“The terrorism of Da’esh [also known as the Islamic State of Iraq and the Levant, or ISIL], Al-Nusrah Front and other Al-Qaida-affiliated terrorist organizations is killing the innocent, capturing women and launching mortar shells on civilians,” said Mr. Al-Moualem.

That terrorism was also cutting off drinking water and destroying history and cultural sites, including those inscribed on the UN World Heritage List, which belong to all humankind.

“The duty of international community is to stop this flow of terrorists coming to Syria from 100 countries, according to United Nations data, in order to create a Caliphate State, which, as you all know, will not be limited in Syria or Iraq,” he declared.

Meanwhile, he applauded Russia’s efforts in collectively combating terrorism and undertaking air strikes at the request of the Syrian Government. Yet, he said that terrorism cannot be fought only from the air, and all of the previous operations to combat it have only served its spread and outbreak.

“Air strikes are useless unless they are conducted in cooperation with the Syrian Army, the only force in Syria that is combating terrorism,” said the Minister.

The Syrian Minister also commented on the UN Security Council’s resolution under Chapter VII and described them as "only ink on paper." He said that certain governments are still funding, sponsoring and supporting terrorism and thereby fuelling extremism in the region.

Syrians nevertheless believed in the “political track,” the preservation of national sovereignty and unity. As the only way to achieve a political solution was through Syrian-led national dialogues and without interference, his country had agreed to participate in relevant conferences as well as in the brainstorming committees of experts proposed by the Secretary-General’s Special Envoy.

“How can we ask the Syrian people to head to the ballot boxes, while they are not safe in the streets and inside their homes, while they are under the missiles and mortar shells launched by terrorist groups supported by well-known countries?” he underscored. 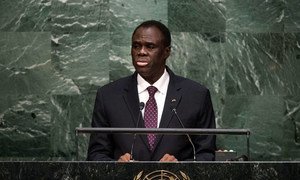 Burkina Faso’s transition won't be stalled by those ‘rowing against current of history,’ says President at UN

Thanking the international community for strongly condemning the recent coup d’état in Burkina Faso, and for backing the transition he is leading, President Michel Kafando today called upon the United Nations General Assembly to continue supporting the county’s efforts “to anchor true democracy,” through to the holding of free and transparent elections.