Speaking at the United Nations General Assembly,Ri Su Yong, Minister for Foreign Affairs of the Democratic People’s Republic of Korea (DPRK) denounced the United States for abusing its powers at the UN Security Council and thereby violating the ‘sovereignty, dignity, peace and security of our nation.

Speaking at the United Nations General Assembly, Ri Su Yong, Minister for Foreign Affairs of the Democratic People’s Republic of Korea (DPRK) denounced the United States for abusing its powers at the UN Security Council and thereby violating the ‘sovereignty, dignity, peace and security of our nation.’

“The same year when the UN was founded, our nation was liberated from the Japanese colonial rule, yet divided into the north and the south by a foreign force. The same foreign force now sits on the Security Council as a permanent member State,” he said.

“In today’s world, there exists international law that defines the use of outer space as a sovereign right of every individual country and there are more than 10 countries that launch satellites. However, the UN Security Council has passed a ‘resolution’ on prohibiting the DPRK only from launching its satellites,” he asserted.

He also stressed that such actions make it difficult to assess “which one takes precedence between the UN Charter and UN Security Council resolution.”

Additionally, he spoke about the DPRK’s referral to the UN Security Council regarding “the aggressive and provocative large-scale joint military exercises’ of the United States and South Korea to be placed on the Council’s agenda.”

“The UN Security Council, however, remained silent on the referral every time. What measures can the UN take when it is the ‘UN Commander’ who commands large-scale war exercises that create a vicious cycle of heightened tensions?” he asked.

“In the long run, it means that the ‘UN Command’ can never be dismantled so long as the United States as a permanent member of the UN Security Council with veto agrees to it,” he stressed.

On other issues, he said that having gone through the “August incident that made northeast Asia and the entire world hold their breadth in anxiety,” it has become a crucial issue today to replace the armistice agreement with a peace treaty immediately.

With regard to safeguarding peace on the Korean peninsula, he said there are issues to be addressed between north and south, as well as other issues to be discussed between his country and the United States. 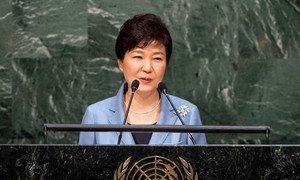 In her address to the annual high-level meeting of the General Assembly, President Park Geun-hye of the Republic of Korea (ROK) cited the Iranian nuclear deal as she urged the international community to focus on resolving the North Korean nuclear issue.