The Vice-President of Angola, Manuel Domingos Vicente, was the first of several African leaders to address the United Nations General Assembly today, spotlighting, among other issues, the possibility of Security Council reform and the growing threat of terrorism.

Noting that this year’s General Debate comes as the Organization marks its 70th anniversary of the UN, Mr. Vicente said the occasion should provide an additional incentive to accelerate reforms aimed at revitalizing the United Nations system.

Such efforts could aim to reform the Security Council by extending the number of its permanent and non-permanent members, “thus making the body more representative and better equipped to address the challenges and opportunities that the world faces.” He added that Angola reaffirms the right of the African continent to be represented among the Council’s permanent members.

Turning to the rise of terrorist activities perpetrated by extremist groups in Africa and elsewhere in the world, he called the scourge a serious security issue that required a global coalition to combat. He also referred to the creation of the Task Force of the Lake Chad Basin Countries and Benin to combat terrorism in Africa, noting it that the coalition deserved the support of the international community.

As for the situation in the Central African Republic (CAR), Mr. Vicente said that Angola supported the efforts of the transitional government to “restore public order and restructure State institutions.”

He said that he welcomed the recent compromise reached between the Government of South Sudan and the armed opposition, and said of Guinea-Bissau that, with its institutional crisis over, political developments indicate economic growth and political stabilization.

Turning his attention to climate change, he said the upcoming agreement in Paris “should include a commitment to limit the increase in average global temperatures to 1.5 degrees Celsius by the end of the century.”

Meanwhile, in his remarks, the Prime Minister of Cabo Verde, José Maria Pereira Neves, also noted the need to come to an understanding on enlargement of the Security Council’s membership, “which in our view should reflect the changes that have occurred in the world, with a more equitable and appropriate representation.” 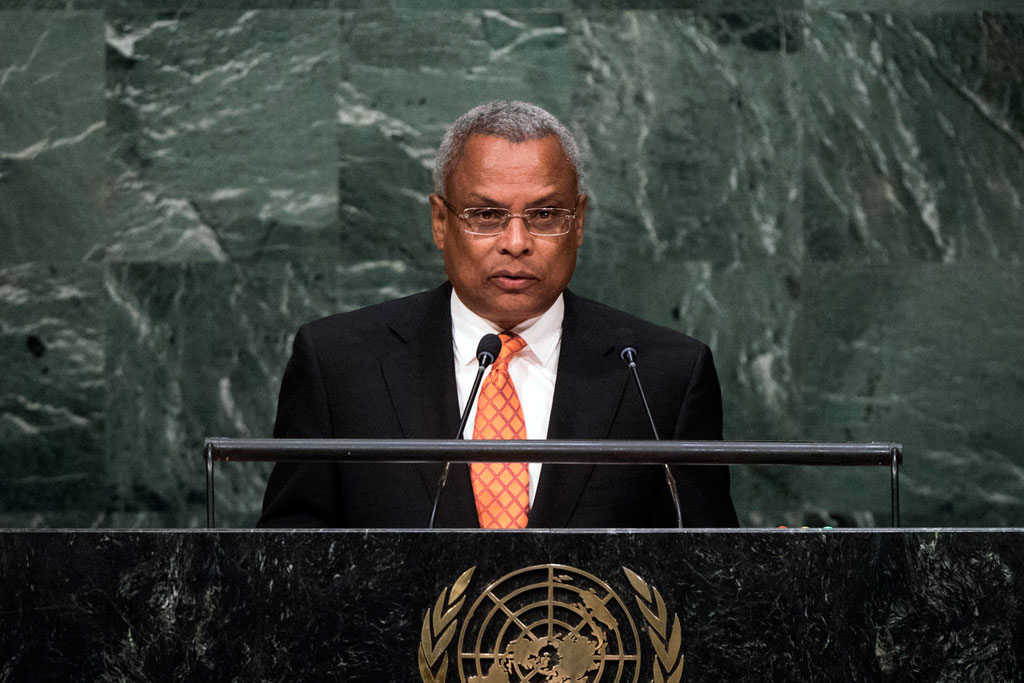 Referring to Cabo Verde regarding its status as a small island developing State (SIDS), he noted with concern threats to the survival of SIDS including climate change, their vulnerability to natural disasters, the risks of loss of biodiversity, the high costs of transport and energy, and other issues, noting that for these reasons they deserve special attention from the UN system in the context of the Sustainable Development Goals (SDGs).Speaking on the subject of terrorism, Mr. Pereira Neves urged the international community to increase its efforts to combat extremism in all forms and expressions. “We firmly condemn all forms of terrorism and, in particular, the barbaric actions of extremist groups in the Middle East, Asia, and Africa,” he underscored.

In his remarks, the Prime Minister of Lesotho, Pakalitha Bethuel Mosisili, spoke of the ongoing violence in Syria, Iraq, Yemen and parts of Africa from the Sahel to the Democratic Republic of Congo (DRC).

“Sadly, the human origin of many of these problems cannot be doubted,” he said. “The refugee problem facing Europe today, will test the limits of the continent's resolve and generosity.” 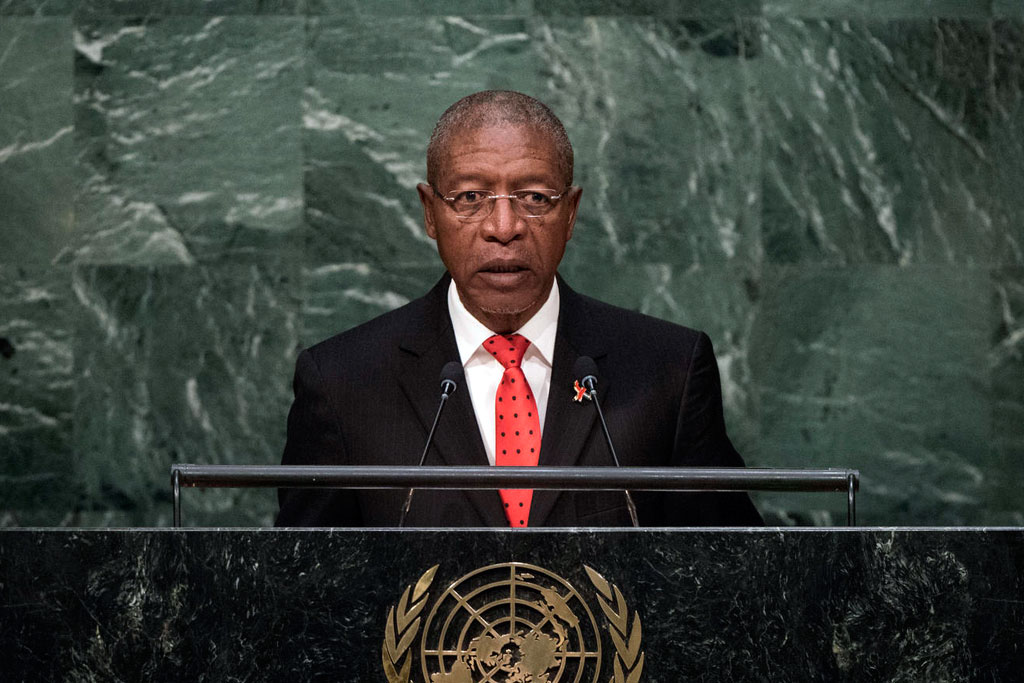 Turning his attention to the problem of terrorism, Mr. Mosisili noted that it had become “more brazen and lethal than before.”“Terrorist networks are expanding across Africa, the Middle East and Asia,” he continued. “Even as we remain vigilant against the threat of terrorism, we must move beyond a mindset that this menace can be defeated by force of arms alone. We may strike blows against terrorist networks, but if we ignore the fact that political instability and religious and other forms of intolerance fuel extremism, our efforts to root out this menace will be futile.”

He also raised the issue of UN Security Council reform, saying that the call for the Council to be more transparent, inclusive and democratic needs to be echoed with even more vigour and clarity. “A Security Council, that has the voice of Africa and other marginalized regions in the Permanent Category, will increasingly acquire legitimacy and unconditional acceptance of its decisions.”

In his remarks, Ramtane Lemamra, the Minister of State and Minister for Foreign Affairs and International Cooperation of Algeria, said that the current session coincides with the seventieth anniversary of the Organization and is taking place at a time when the international community is facing many challenges.

“While many peoples have broken free from colonialism and the world has seen a qualitative improvement in development,” huge challenges remained, with ongoing foreign occupation in some regions, worsening hunger and poverty, terrorism, drug trafficking and organized crime, he said. 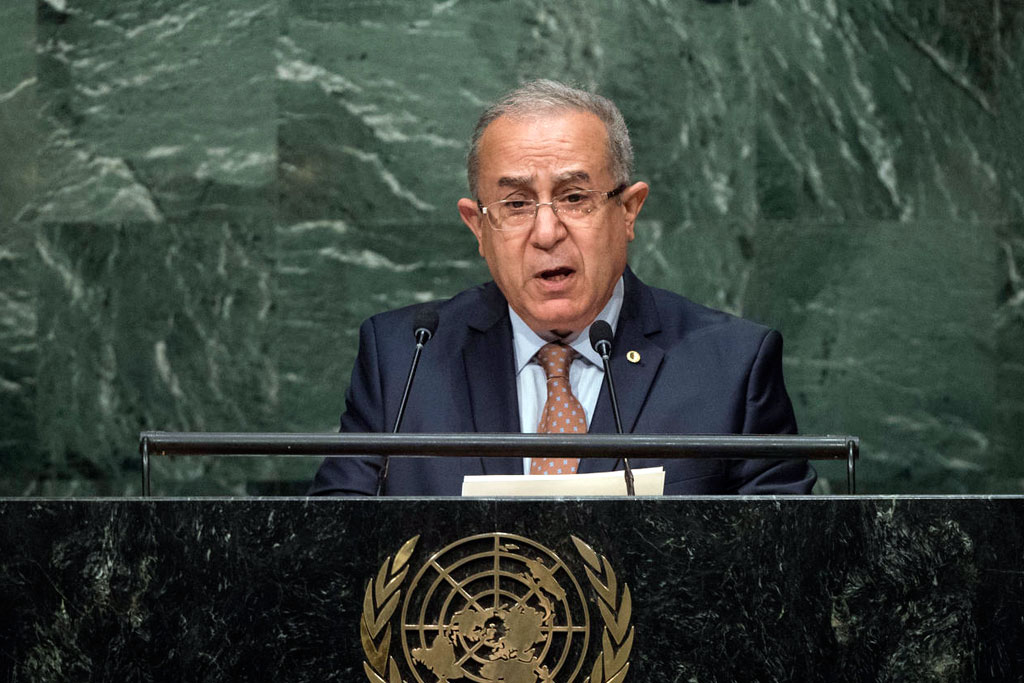 The massive flow of refugees due to war represents a collective failure to deal with the conflict in the Middle East. Algeria, the Prime Minister said, underscored the need to continue reforming the Organization, adapting its mechanism to the current moment.He went on to say that it is necessary to reaffirm the role of the General Assembly as the main forum for international cooperation, while also reforming the Security Council which no longer reflected the composition of the international community, particularly the African continent.

Also speaking today, the Minister of Foreign Affairs for Chad, Moussa Faki Mahamat, told the Assembly that success in Africa depended on the security situation there, as well as the ability to finance development plans and strategies.

Mr. Mahamat also noted that that success also depended on “the solidarity of developed countries with developing countries in terms of effective financing,” and because of the conclusions of the Addis Ababa summit on development financing, his expectations remained high.

He also spoke about the challenges that the United Nations faced in terms of armed conflicts, terrorism and migration. 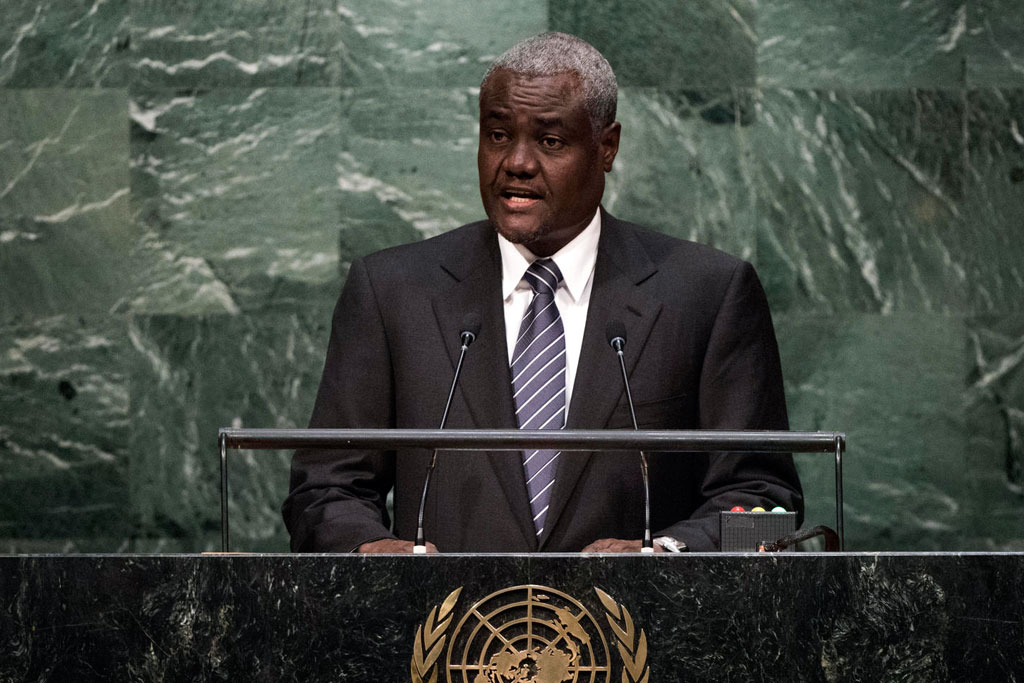 Speaking of the Central African Republic, he said that “bloody clashes in recent days have called into question the few hard won gains,” noting that the international community must offer support to countries in transition.Turning his attention to the Lake Chad Basin, he noted that Boko Haram had not ceased its terrorist activities in the region, and said that a multinational joint task force had been assembled “to put an end to the evil acts of this sect.”

He said that, while Africa was grappling with the threat of terrorism, it was using up finances on security rather than economic and social development.

He also noted the “transnational capacity of terrorists to act across borders,” telling the General Assembly that nations should pool their response strategies into regional and international cooperation.

Botswana’s Vice-President, Mokgweetsi Eric Keabetswe Masisi, said his country is “proud of the tremendous strides we have made in the implementation of the MDGs [Millennium Development Goals]” and looked forward to implementing the new development agenda.

Speaking of the challenges of climate change, Mr. Masisi noted that the importance of the agreement set to be decided upon in Paris could not be over-emphasized. 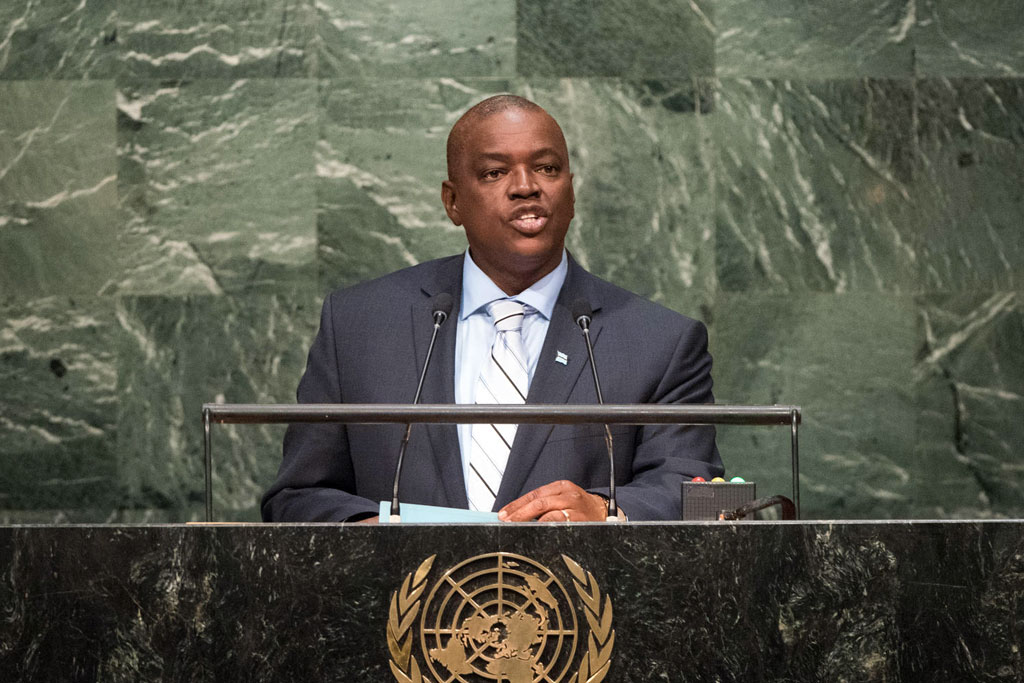 “Climate change is arguably the greatest environmental challenge the world continues to face, with potentially catastrophic consequences for our planet and future generations, if left unchecked,” he said. “We continue to witness a dangerous rise in sea levels, melting glaciers, severe decline in agricultural output, changing weather patterns and health challenges caused by the change in climatic conditions,” adding that developing countries were the hardest hit. Mr. Masisi also spoke about recent developments in migration and refugee flows.

“Conflict, political instability and poverty are the main push factors of migrants from the developing to developed countries, as evidenced by the thousands that continue to cross the Mediterranean into Europe in search of economic opportunities,” he said. “The grave conditions that the migrants are exposed to, including what they contribute to the unprecedented levels of humanitarian crises, is a cause of great concern,” he continued, noting that the situation warranted urgent attention from the international community.

He also said that Botswana believed that the “the imposition of quotas to make it mandatory for countries to accept migrants or refugees is not the best solution,” positing instead that “consideration should be given rather to reward and support the countries accepting these migrants or refugees by setting up a Special Fund under UNHCR [UN High Commissioner for Refugees].”

In his remarks, Raymond Tshibanda N’Tungamulongo, Minister for Foreign Affairs and International Cooperation of the Democratic Republic of Congo, said the United Nations remains relevant in its timely objectives and principles. However, without peace, development “is just a hypothesis.” Where underdevelopment and poverty reign, social demands frequently lead to violence. 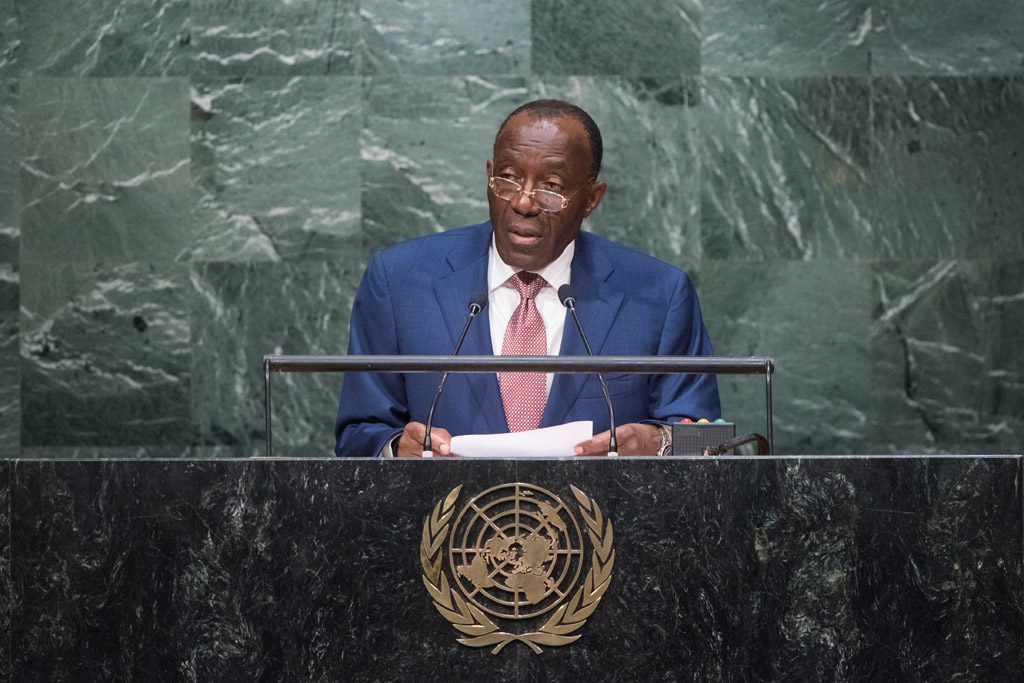 “There are no borders anymore,” he said, stressing that the “synergy of efforts” is not an option but an absolute necessity. Similarly, reform of the Security Council to include his continent is urgently required. In that regard, he reaffirmed his country’s unreserved support for the Ezulwini Consensus, which was the only way to ensure the appropriate representation of his continent on the Council.Recalling his country’s history of conflict, he said the Democratic Republic of Congo might have vanished had it not been for the United Nations. He saluted the international solidarity that had supported it, especially the troop contributing countries of the UN Organization Stabilization Mission in the Democratic Republic of the Congo (MONUSCO). Peace, security and the authority of the State had been restored in most of the country, which had fostered large-scale economic growth. Finally, in light of today’s situation in his country, it was time to rethink the United Nations presence there and to begin a decrease in MONUSCO troop levels. 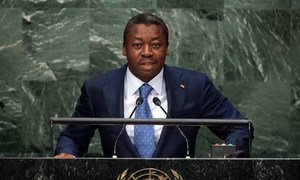 Among the host of African leaders addressing the United Nations General Assembly today, the President of Togo, Faaure Essozimnia Gnassingbé, stressed the need for continued support to the continent – as well as ongoing cooperation with the vital work of the African Union – to ensure that gains of the past decades could be maintained and bolstered in the face of lingering poverty, terrorist activities and weak governance systems in some areas.