Appealing for more relief aid for Yemen's beleaguered civilian population, President Abd Rabbuh Mansur Hadi, told the United Nations General Assembly today that he had recently returned from the war-ravaged coastal city of Aden, which nevertheless was experiencing “great joy as it has been liberated from the Houthis militia.”

“Yet, I am troubled to see the degree of destruction left in the wake of these criminal militia,” said Mr. Hadi, denouncing the tragedy in Aden and other Yemeni cities.

“Three years ago I found myself at this podium before you,” he continued. “At that time I spoke of the various stages we had undertaken to ensure a successful transition a handover of power in a spirit of peace.”

Detailing the political transition process, he noted that just as the Constitution was supposed to be submitted to a popular referendum, Houthi militias launched a political and military coup d'état.

Mr. Hadi said that Yemen had appealed to neighbouring countries for assistance in tackling the Houthi militias, and that the response was a “courageous one,” particularly from the Kingdom of Saudi Arabia, which, he said, had “acted with utter determination.”

He also noted with concern the human tragedy sparked by deteriorating public services in various provinces.

“This requires greater effort internationally so as to alleviate human suffering and to ensure that the Yemeni crisis is not forgotten,” he said.

While the United Nations has announced an appeal for humanitarian assistance, Mr. Hadi noted that the contributions only covered a portion of what was needed.

“I would like to take this opportunity to address and appeal to donor countries to ensure that they provide the promised assistance,” he said.

All efforts for peaceful settlement to the political crisis would be welcomed and supported, Mr. Hadi underscored.

“I do hope that efforts made by the United Nations will be crowned by success,” he said, emphasizing that “the satiability of our country is a source of stability for the region and the world.” 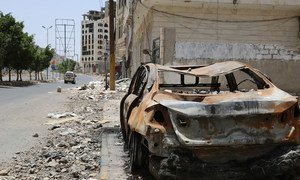