The UN’s top development officials are keenly focused and enthusiastically preparing for the moment Friday afternoon when the Organization’s 193 Member States formally adopt the new framework, Transforming Our World: the 2030 Agenda for Sustainable Development , composed of 17 goals and 169 targets to wipe out poverty, fight inequality and tackle climate over the next 15 years.

In a series of interviews with the UN News Centre, the officials forecast 2015 as “a watershed year” for the United Nations for having reached an agreement that will “change the paradigm about development,” while “leaving no one behind” and giving a boost for a global climate change accord later this year.

Already this week, the likes of pop star Shakira and footballer David Beckham, both Goodwill Ambassadors of the UN Children’s Fund (UNICEF), have made appearances to preview the importance of these Global Goals: the UN Headquarters complex was lit up one night with colourful, massive projections of the new Sustainable Development Goals for all to see, and for those who missed that, New York City cabs are running mini lessons on taxi TV about the Goals to which world leaders will commit.

The three-day UN Sustainable Development Summit kicks off Friday with a record number of top world leaders expected to attend, as well as heads of multilateral bodies like the World Bank and the International Monetary Fund (IMF).

Joining them will be Pope Francis, who will be making a historic address to the UN General Assembly during a visit timed for the global gathering. The Summit will then open with a screening of the film The Earth From Space and that will be followed by performances from Shakira and fellow UN Goodwill Ambassador singer Angelique Kidjo, as well as call to action by female education advocate and the youngest-ever Nobel Laureate, Malala Yousafzaii, along with youth representatives as torch bearers to a sustainable future.

UN Deputy Secretary-General Jan Eliasson has said: “People have the right to have expectations because there is a need to make sure that the former goals, the MDGs [Millennium Development Goals] are truly achieved.”

The MDGs grew out of the 1992 UN Conference on Environmental and Development better known as the Earth Summit held in Rio de Janeiro, Brazil, where the concept of sustainable development began to gain momentum. With 2015 set as the target year for the MDGs, the new sustainable development agenda emerged from three years of negotiations to address the three interconnected elements of economic growth, social inclusion and environmental sustainability.

UN Secretary-General Ban Ki-moon described the agenda as “a clarion call” to “share prosperity, empower people’s livelihoods, ensure peace and heal our planet for the benefit of this and future generations” while his deputy, Jan Eliasson, said the UN leadership attaches “enormously high priority” to mobilizing the UN system, member states, civil society, the private sector and the scientific community to ensure the “transformative changes” take place to make the vision a reality on the ground.

Deputy Secretary-General Eliasson told the UN News Centre that 2015 could turn out to be a historic year for the United Nations if the world can also agree on a bold agenda to combat climate change in Paris this December.

At a press conference earlier this week, Amina J. Mohammed, the Secretary-General’s Special Adviser on Post-2015 Development Planning, described the agreement on the Goals as “really meaningful.”

“It's universal so it applies to everyone,” she explained. “We will no longer have a North-South conversation about what the North is doing for the South, but what we are doing for each other. Clearly anything that happens anywhere in this world has that fallout in many other places – from the global financial crisis to conflict and migration, we feel it everywhere – to natural disasters and climate change.”

The new goals “leave no one behind – not people, not groups and not whole countries. That’s a powerful message that we need to work in ways that to support the poorest and most vulnerable to succeed in development as well,” Miss Clark said.

“UNDP is totally committed to working alongside all developing countries to achieve the SDGs and to work with developed countries on making it possible through getting the funding which will help support us to help build and develop the capacity of countries to fly,” she said “That’s what we are dedicate to.”

Another senior UN development official eagerly looking forward to the formal adoption and implementation of the Goals was UN Assistant Secretary-General for Economic and Social Affairs Lenni Montiel.

“This year, 2015, is a watershed year,” said Mr. Montiel, describing the new agenda as “a unique agreement that will change the paradigm about development in the world.”

He drew attention to the fact that there was unprecedented involvement of young people from all countries throughout the negotiating process.

Jan Pasztor, the Secretary-General’s advisor on climate change, hailed the adoption of the global goals as “a really a very important development, in order to help and be ready to combat climate change.”

The new agenda gives a “very positive” momentum for governments who are negotiating a new, meaningful and universal agreement on climate change in Paris this December, Mr. Pasztor said.

Mr. Ban hopes the visit to the UN by Pope Francis will also bolster support for action on climate change, his advisor said.

And Wu Hongbo, Under-Secretary-General for Economic and Social Affairs, whose department is responsible for the development pillar of the United Nations, encouraged everyone to watch.

“We hope you will be an eyewitness to this historic moment,” Mr. Wu said. 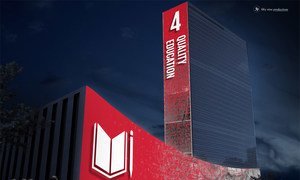 The United Nations Secretariat Building in New York will be illuminated this evening with massive projections relating to the Sustainable Development Goals (SDGs) ahead of the three-day special UN summit beginning on Friday.