UN Photo/Evan Schneider
President of the seventieth session of the General Assembly, Mogens Lykketoft, rings the Peace Bell at the annual ceremony held at UN Headquarters in observance of the International Day of Peace (21 September).
21 September 2015

The United Nations today observed the International Day of Peace with Secretary-General Ban Ki-moon appealing to all warring parties to lay down their weapons and observe a global ceasefire and “stop the killings and the destruction, and create space for lasting peace.”

The UN chief made the call at the Peace Bell ceremony, which kicked off the series of events at UN Headquarters in New York for the Day, which is observed annually on 21 September and whose theme this year is “Partnerships for Peace – Dignity for All.”

“Just as surely as striking this Bell makes a sound, we will continue to hammer this point and demand peace,” Mr. Ban said.

“We live at a moment of peril,” he said in his message for the day, but also drew attention to the fact that “this is also an era of great promise.”

“In a matter of days, leaders from across the globe will gather at the United Nations to adopt the 2030 Agenda, our 15-year plan to achieve sustainable development,” the UN chief said. “This is fundamental to ushering in a life of dignity for all, where poverty is history and peace is paramount.”

Joining Mr. Ban at the Peace Bell ceremony and later at the International Day of Peace Student Videoconference that followed were UN Messengers of Peace anthropologist Jane Goodall and actor Michael Douglas, and UN Goodwill Ambassador and musician Herbie Hancock. Fellow Messenger of Peace and cellist Yo Yo Ma performed for the students attending the conference. 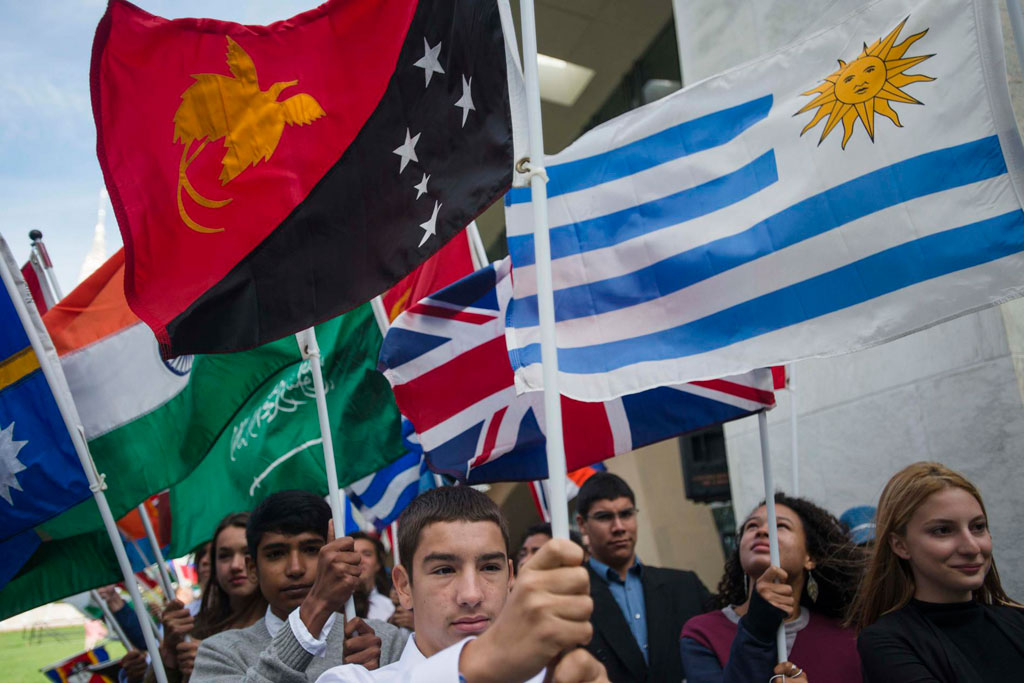 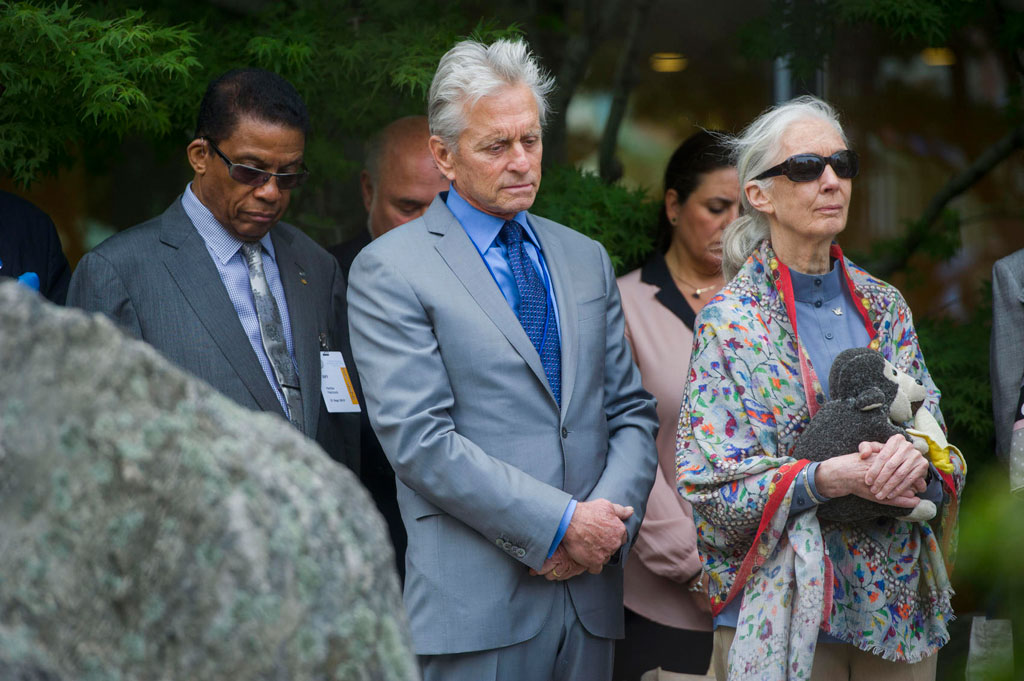 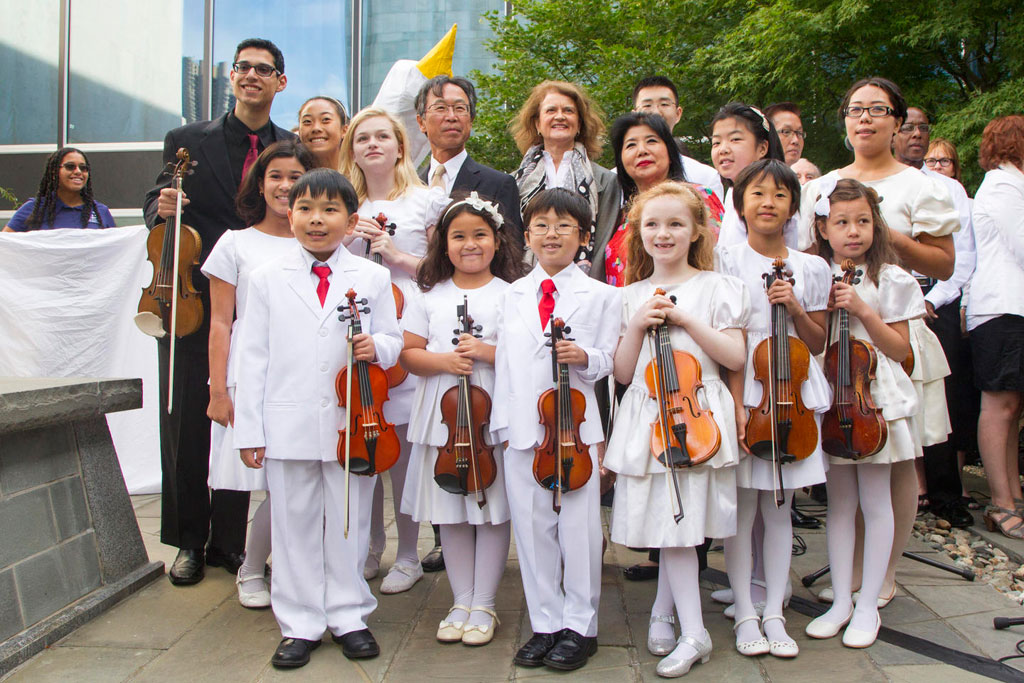 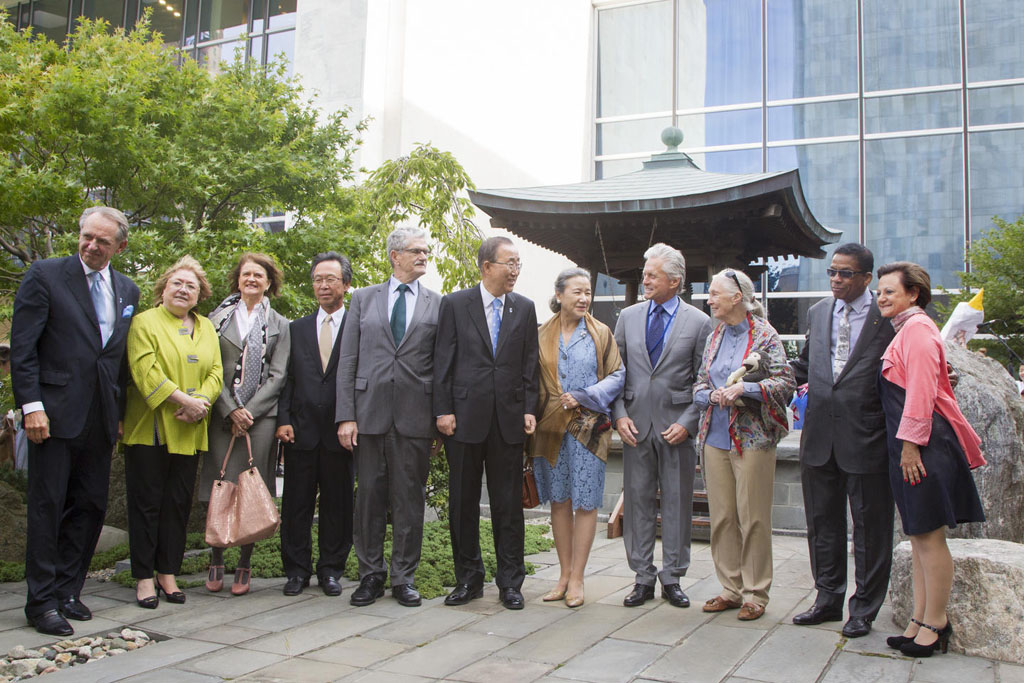 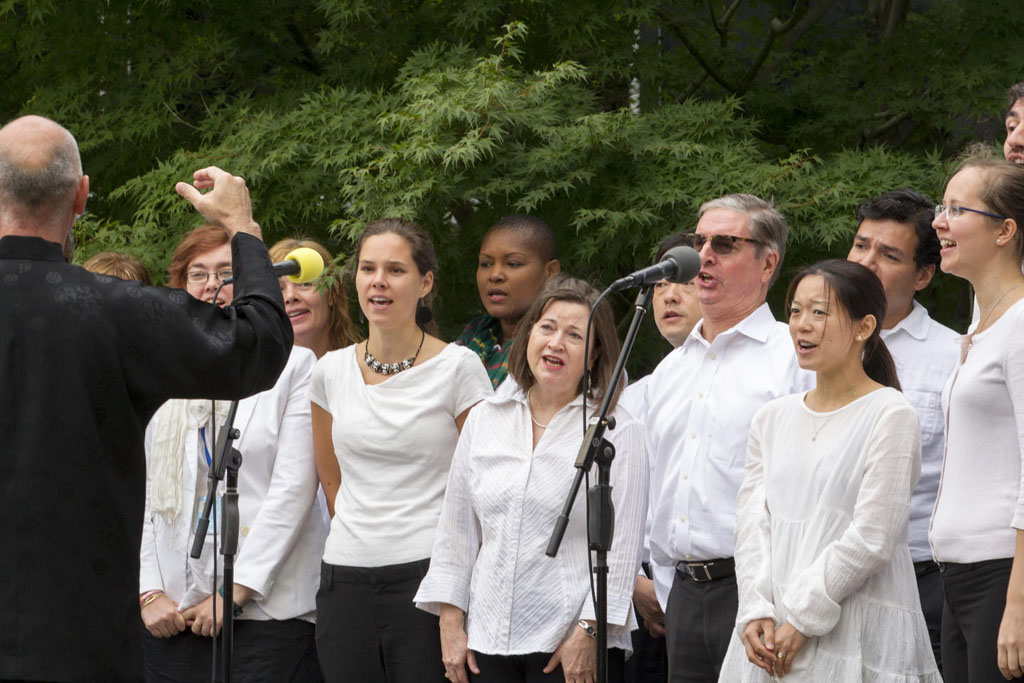 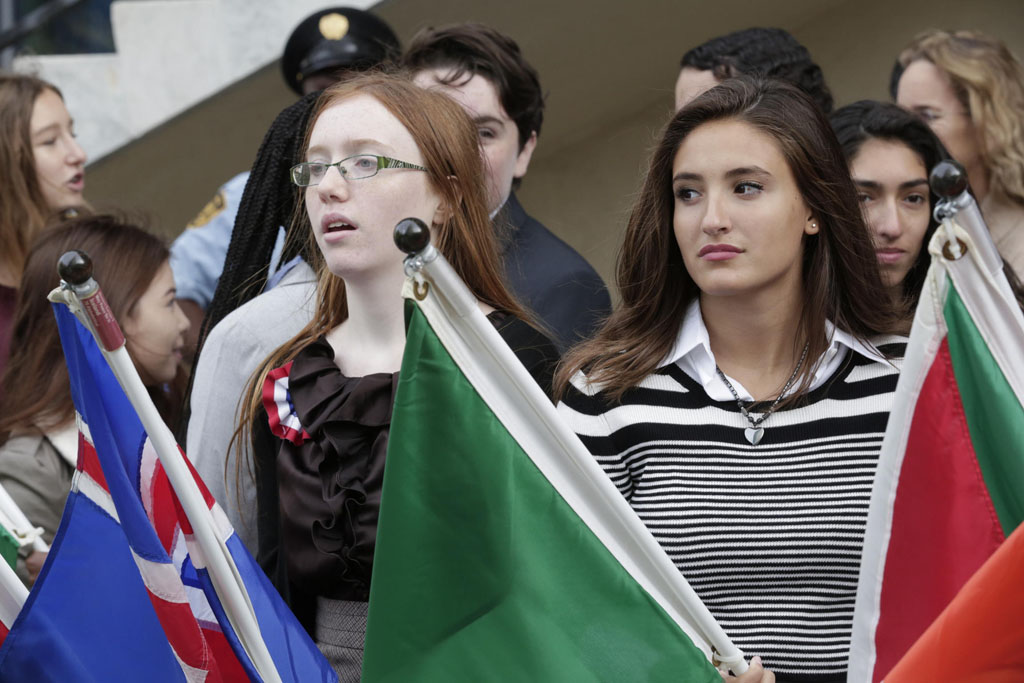 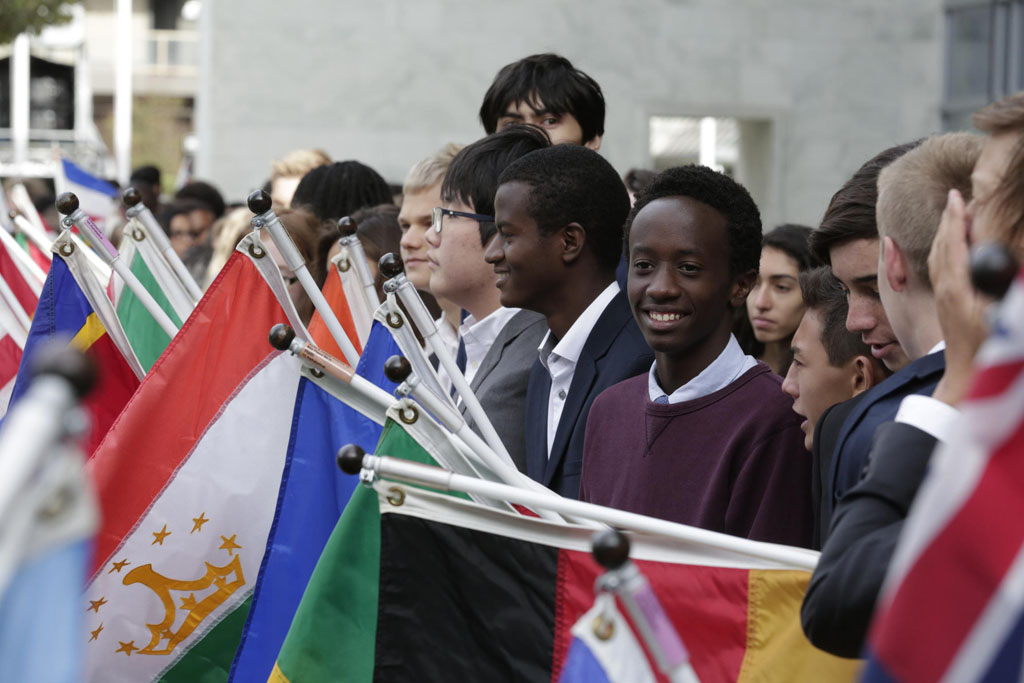 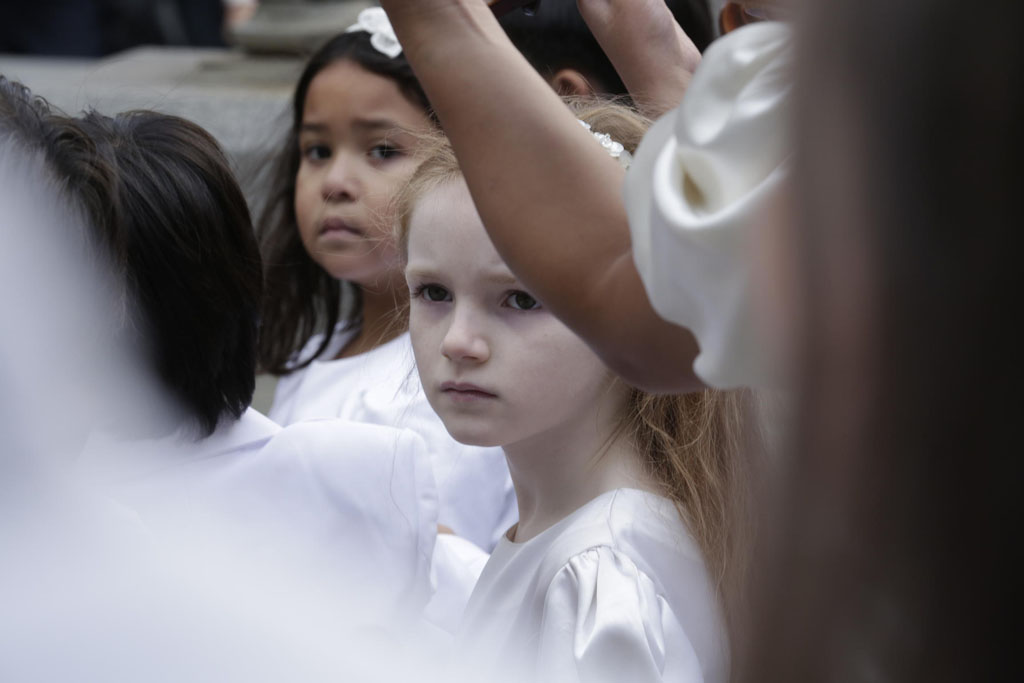 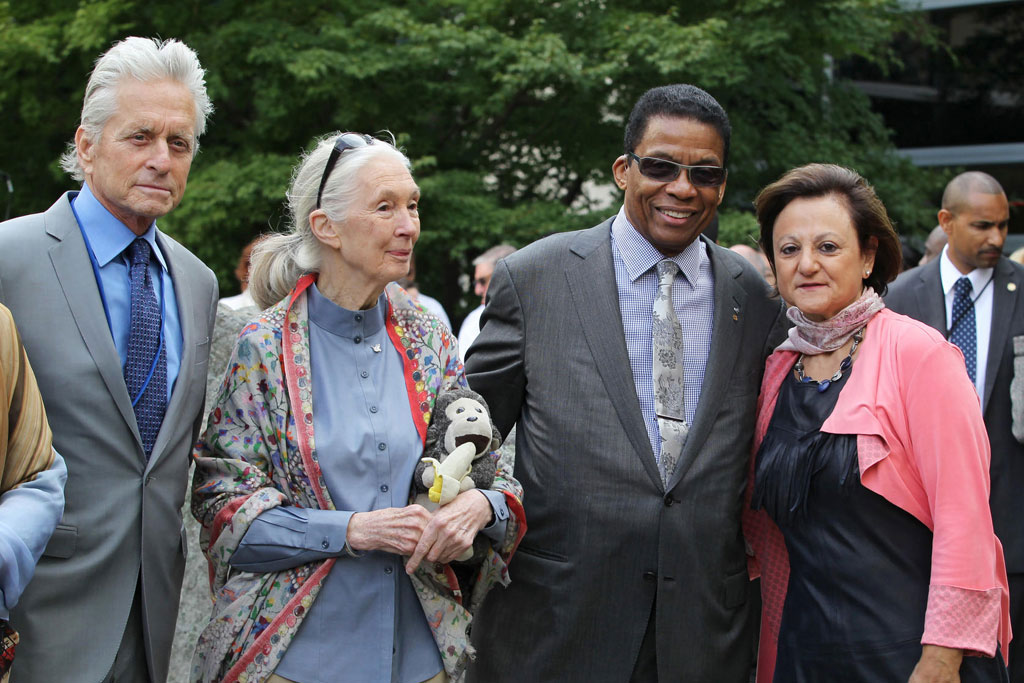 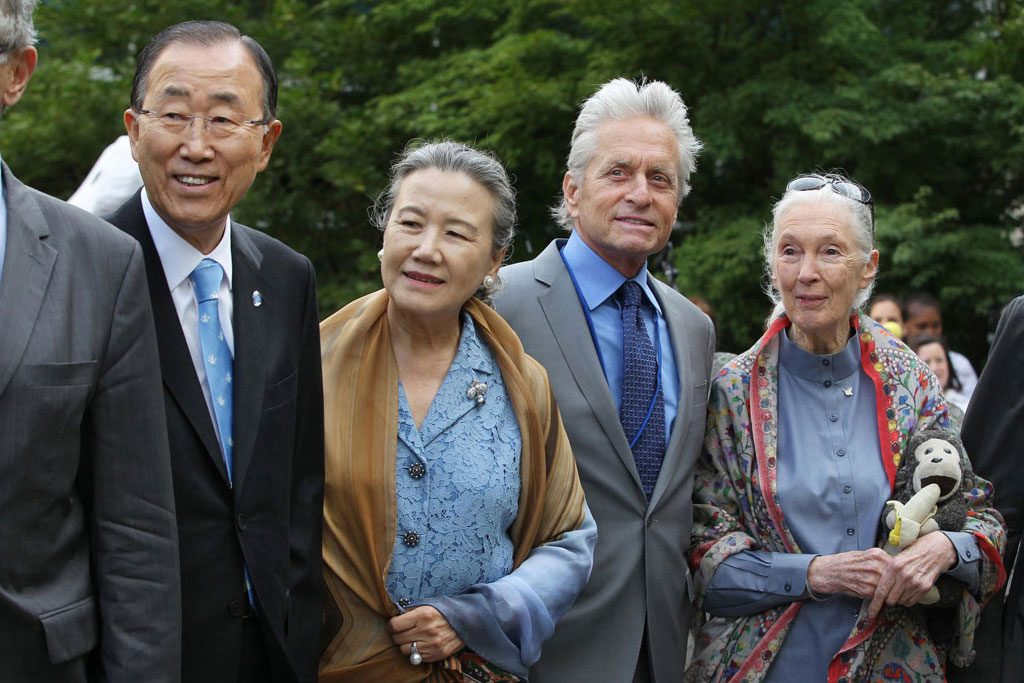 General Assembly President Mogens Lykketoft used the occasion of the International Day to urge all countries to solve the global refugee crisis “whether they have the luxury of distance or face the challenges of proximity.”

“The international community has an unequivocal obligation towards the women, men and children seeking refuge from conflict and violence,” said Mr. Lykketoft, who added that he intended to discuss the issue with Pope Francis during his visit to the UN on Friday.

“The tragic stories and heart-breaking images we are seeing in the media are only the tip of the iceberg – the manifestation of much bigger issues which only multilateral cooperation and global leadership can solve,” Mr. Lykketoft said. “This is a global crisis. And it requires a global solution.”

“On the International Day, as we mark the 70th anniversary of the United Nations, let us seize the opportunity achieve the Organization’s founding purpose: to save succeeding generations from the scourge of war,” the Secretary-General said.

Mr. Ban also attended a Tea Ceremony for Peace at which he said “the beauty of this tea ceremony is its simplicity” and even though the world is facing many complex problems, “we just have to act in solidarity based on our common values of human rights, justice and peace.”