OCHA/Franck Kuwonu
Most families who fled their homes in north-east Nigeria in fear of the militant group Boko Haram are desperate for food as their host communities across the border in Diffa, Niger, don't always have enough for themselves.
18 September 2015

The top United Nations humanitarian official for the Sahel today commended the immense generosity of the Government and host communities in Niger which are hosting those fleeing violence in neighbouring Nigeria, and called on the international community to take its responsibility for a greater share of the “humanitarian burden.”

“Trauma and psychosis are palpable amongst families who fled Boko Haram’s brutal attacks on their hometown,” Toby Lanzer, the UN Regional Humanitarian Coordinator for the Sahel, said in a press release.

He recently completed a five-day mission to Niger to assess the humanitarian situation of a country facing multiple crises. He visited the south-eastern region of Diffa, particularly affected by violence and insecurity around the Lake Chad basin, before travelling to Agadez, a major transit hub for migrants in West Africa.

“Most are women and children who expressed an immense despair,” Mr. Lanzer noted after meeting families at the Assaga site, hosting over 6,000 internally displaced persons (IDPs) and refugees from Nigeria.

“Despite joint efforts by the Government and humanitarian teams, the deprivation is obvious. Their livelihoods were decimated. Some have been forcibly displaced several times, others sleep under the stars. Young people, in particular, are out of school and have little prospects for the future.”

The site of Assaga lies in the Diffa region of Niger, which hosts over 150,000 IDPs and refugees. They found shelter in an extremely fragile region, where communities suffered successive years of droughts and floods, recurrent epidemics and limited access to basic services.

In Diffa, an estimated 350,000 people are food insecure, and the number of children admitted for the treatment of severe acute malnutrition has doubled compared to the same period last year.

"More than one in every four people is now displaced in Diffa. Communities that host them come from the worst-off region of the poorest country in the world,” the Regional Humanitarian Coordinator said.

Niger is host to a total of over 220,000 persons displaced by conflict in neighbouring Nigeria, Libya and Mali. In addition, thousands of migrants transit through the country each year.

Meanwhile, the UN Resident Coordinator in Niger, Fodé Ndiaye, said that beyond essential life-saving assistance to those in crisis, more investment into policies is needed to curb the cycle of repeated crisis.

“Access to education, employment, quality public services and increasing and equitable wealth are essential if we are [to] engage in structural changes and preserve the island of stability that is Niger in the midst of a region in turmoil,” Mr. Ndiaye said.

According to the UN Office for the Coordination of Humanitarian Affairs (OCHA), this year’s humanitarian appeal for Niger calls for $376 million to address the most pressing needs throughout the country. To date, only 40 per cent of its financial requirements have been met. 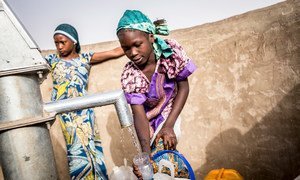 The number of attacks by Boko Haram in northeast Nigeria and neighbouring countries has risen, and half a million children have had to flee to safety in the past five months, bringing the total number of displaced children in the region to 1.4 million, the United Nations Children’s Fund (UNICEF) said today.